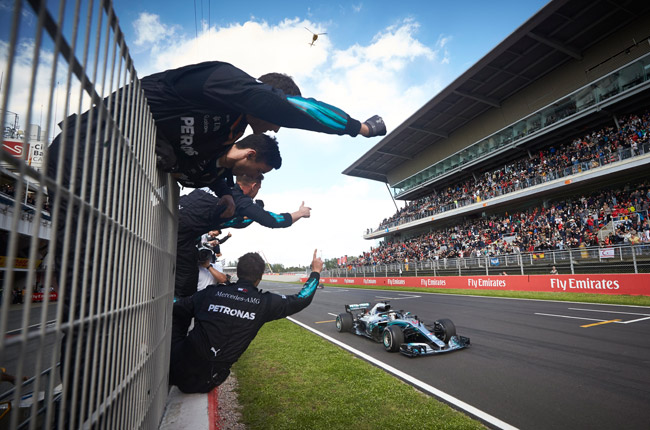 Mercedes-AMG completes a one-two finish as Lewis Hamilton crossed the line 20 seconds ahead of Valtteri Bottas at the 2018 Formula 1 (F1) Spanish Grand Prix. With this, Mercedes-AMG jumps ahead of Scuderia Ferrari in the Constructors Championship by 27 points.

When the lights turned green, the Silver Arrows of Mercedes at the front row were split as Ferrari’s Sebastian Vettel took advantage of the slipstream to overtake Bottas before turn one. Hamilton, who had successfully defended Vettel’s overtake attempt on him, was quick to build the gap between his rival.

But as Hamilton began to pull away, Haas’ Romain Grosjean spun at turn three. His out-of-control F1 car then crashed into Toro Rosso’s Pierre Gasly and Renault’s Nico Hulkenburg. Due to the damage, the three drivers retired and the safety car came out.

After five laps under the safety car, the race and Hamilton’s dominance resumed. Meanwhile, Vettel managed to keep the gap between him and Bottas big enough that the latter was out of the range to use the Drag Reduction System (DRS). Ferrari was the first team to call in their car to the pits as Vettel switched to the medium tire compound on lap 18. A lap later, Mercedes followed suit as Bottas went in, however, a slow stop saw him come out behind Vettel. Hamilton changed to medium tires on lap 25, handing the lead temporarily to Red Bull Racing’s Max Verstappen who has yet to make a pit stop. On the same lap, the other Ferrari driver had to end his race due to a power issue.

At this stage, the race leaders were set to go all the way to the end but another twist in the Grand Prix happened. Force India’s Esteban Ocon came to a halt due to a suspected oil pressure problem, which brought out the virtual safety car. Ferrari gambled and brought in Vettel to switch to a fresh set of medium tires. Unfortunately for the German, Force India’s Sergio Perez dove into the pit a few seconds later and Ferrari had to let his car pass before releasing Vettel. This proved to be very costly for the Italian racing team as Bottas took second place, Verstappen claimed third, while Vettel dropped to fourth.

Hamilton would cross the finish line 20 seconds clear of his teammate in first while Verstappen completes the podium places in third.

The next race of the 2018 Formula 1 season will be at the streets of Monaco on May 27. Will the Mercedes domination continue? Or will Ferrari or Red Bull Racing stop the bus for the Silver Arrows? Guess we’ll have to wait and see.