Originally making its debut back in the late 90s Ford Philippines has brought back its iconic model the F-150 into the country. It's big, it's long and it's finally back in the local automotive market after a long hiatus via an online launch event. With that said here's what you need to know about the new to the Philippines Ford F-150. The new Ford F-150 comes into the local market with two variants the Lariat and the Platinum. Each variant comes with its own unique styling befitting the model. In general, both variants come with an overall masculine look, as most pickups have, that evokes strength and a brutish charm. Both pickup truck variants come with Quad-beam LED headlights which flank a massive grille that is split by two horizontal bars. Both variants feature body-colored bumpers, daytime running lamps, and LED fog lamps. At the side, both the Lariat and Platinum come with power side-view mirrors with LED repeaters and step boards to make going in and out of the truck easier. Moving on to the rear both models of the F-150 come with LED taillamps, a high-mount stop lamp with a cargo lamp, and a LED trailer hookup light. 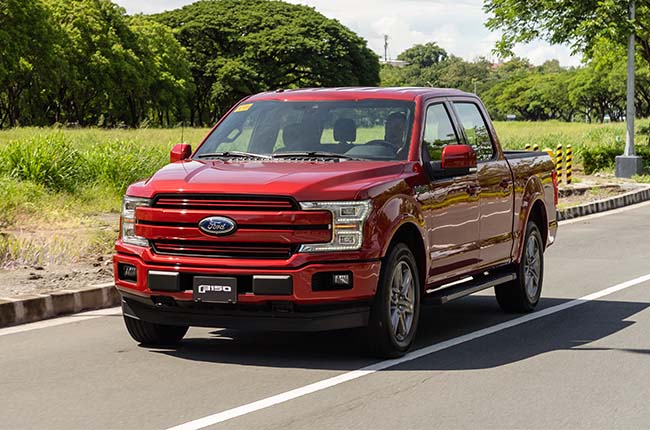 The Platinum variant, on the other hand, gets access to a satin-aluminum grille with a silver mesh, a tailgate applique, chrome side mirror caps, bright beltline moldings, high gloss B-pillar applique and “Platinum” badging on the fender sides. Aside from this the range-topping variant also gets access to a twin-panel moonroof as well as to a tailgate step with tailgate lift assist. Due to the Platinum trim-level also being the 4x4 variant it automatically comes with front skid plates to protect the under chassis. 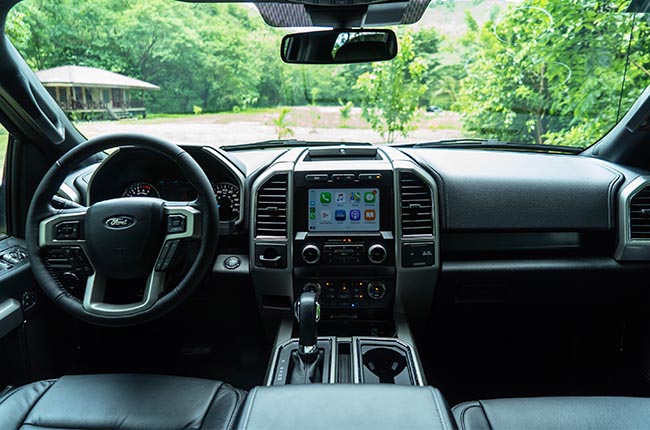 On the inside, the new to the Philippines F-150, it comes with leather seating material as standard for both variants, 10-way power climate-controlled driver’s seat with memory functionality, a 10-way power climate-controlled front passenger’s seat, and a 60/40 split one-touch flip-up rear seat that also comes with an armrest. Dual-Zone Automatic Temperature Control is standard in both variants along with, an intelligent access push-button start system, an illuminated entry system, along with ambient lighting in Ice Blue.

The interior trim changes between both variants. The Lariat gets a unique Lariat finish on its instrument panel, media bin lid, and doors. While the Platinum comes with genuine black ash wood, and aluminum applique on the center panel and center console, a unique instrument gauge cluster, a color-coordinated carpet flooring with premium floor mats, and a metallic door-sill inserts with the word ‘Platinum’ spelled out. 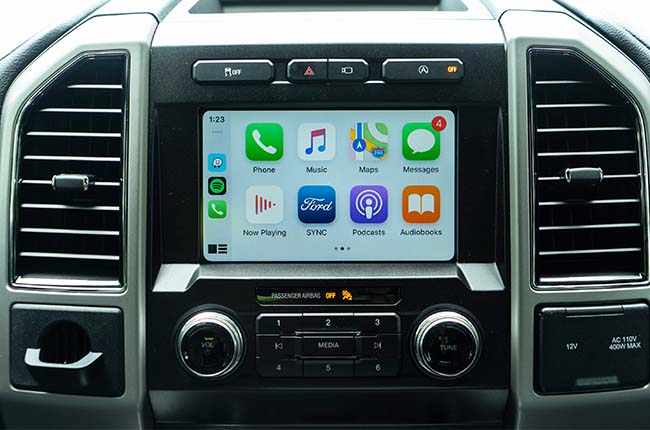 Both variants of the Ford F-150 come with an 8-inch LCD Capacitive touchscreen which also features the brand’s SYNC3 technology. Aside from this the head unit also comes with AppLink, Apple CarPlay, and Android Auto functionality. For your charging needs, the infotainment system also comes with two smart charging USB ports along with a 12 V socket. The infotainment system is also already navigator ready straight out of the dealership. Both variants of the Blue Oval’s iconic pickup truck come with a 10 speaker B&O sound system by Bang and Olufsen that comes with a subwoofer. An 8-inch productivity screen in the instrument cluster is also present in both variants of the vehicle. 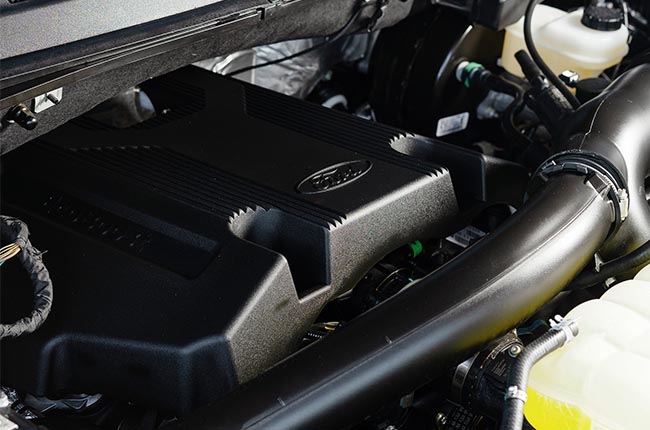 Powering both variants of the pickup truck is a 3.5-liter twin-turbo Ecoboost V6 gasoline motor that makes 375hp at 5,000 RPM and 637 Nm of torque at 3,500 RPM. Power is sent to either the rear wheels or all four via a 10-speed automatic transmission.

The new F-150 comes to the Philippines with a starting price of P2,698,000 for the 4x2 Lariat version, and P2,998,000 for the 4x4 AT Platinum variant. If you want to get your hands on Ford’s newest pickup truck in the country we highly suggest using our Buy Online feature now to make getting your new car a smoother and easier process.