The new Ford Lightning is unveiled for the world to enjoy. It’s an all-electric full-size pickup truck that is based on the Ford F-150. It’s built in Detroit and comes with the same dimensions as its gasoline counterpart. As stated in its launch, the electric vehicle (EV) will have a starting price under $40,000.

Ford’s EV pickup will remain unavailable for sale until it comes to market in the first to the second quarter of 2022. The Lightning is part of the EV trio that will propel Ford to new heights That being said, the new truck fits nicely in the EV lineup, which is seemingly comprised of all of Ford’s most recognizable nameplates—the Mustang Mach-e and Transit-e. As for the exterior, it resembles the next-generation F-150, but with more EV-like elements like a blocked-off grille. It also has a light bar that spans the entire length of the hood. However, everything else looks similar to the standard gasoline-powered Ford F-150, but the taillights are joined together by yet another LED light bar that spans the entire width of the tailgate. Of course, the model gets a full suite of LED lighting elements, in keeping with the futuristic theme of the EV. 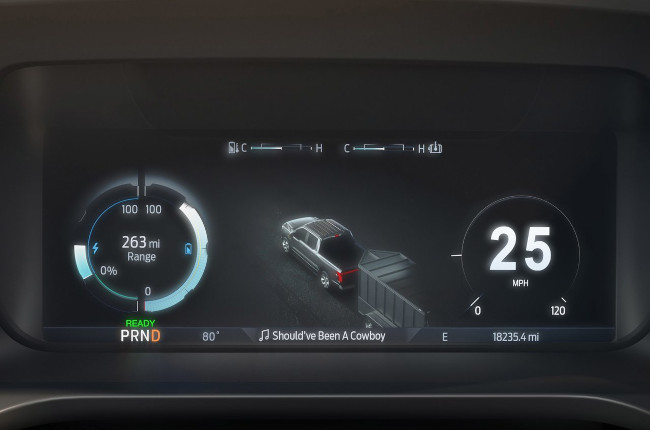 As for other creature comforts, the lightning gets a frunk in its engine bay, which enhances the cargo-carrying capacity of the truck. You won’t have to cozy up to your bags in the cabin like in the conventional F-150, instead, you have the frunk to place your luggage in. Meanwhile, the interior itself receives an update. While it retains many of the familiar F-150 motifs, several elements on the truck are sharper and crisper in their execution. In the center of the dashboard, we see a futuristic 15.5-inch touchscreen in portrait orientation—similar to what Tesla has done with their vehicles. This is Ford’s Sync 4A system, and it is the latest rendition of the Blue Oval’s popular infotainment system. That being said, it comes with wireless Apple CarPlay and Android Auto out of the box, and will also get over-the-air updates with its operating system. The driver will also be treated to a fully-digital instrument cluster, which is a big departure from the current-generation F-150 we have in the Philippines. 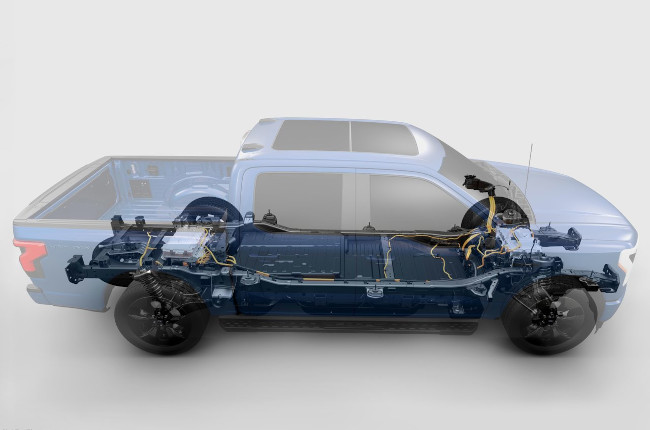 As for specifications, the EV will come with a 370 km range with the standard battery. Customers can opt for the Lightning with a battery that is rated at 482 km, but the specifications of which are not yet detailed. As for the performance of the electric powertrain, Ford stated that it is similarly capable to the gasoline variant of the F-150, which comes with a 3.5-liter EcoBoost V6 motor. According to the press release, the F-150 Lightning has an estimated output of 426 hp with the standard battery, and 563 hp with the extended battery. Meanwhile, torque is estimated to be at 1051 Nm for both motor configurations. These insane figures allow the Lightning to carry up to 907 kg of payload in the standard range configuration. Towing capabilities, however, are a different story, as the Lightning is able to tow up to 4536 kg of weight. Because the model will have an all-wheel drivetrain, there will be two electric motors—one in the front and one in the back. Going back to the starting price, the F-150 Lightning is at a great price point in the market as it has a price advantage over its competitors. That being said, the F-150 Lightning is more affordable than many of its competitors from other brands like Rivian and Tesla. While this truck is awesome, it will be quite a few years before the Philippines will be able to see it. There are a few electric vehicles out on the road—registered, but several conveniences like fast-charging stations are all but absent on Philippine roads at the moment. Perhaps the hybrid version of the F-150 will come first.