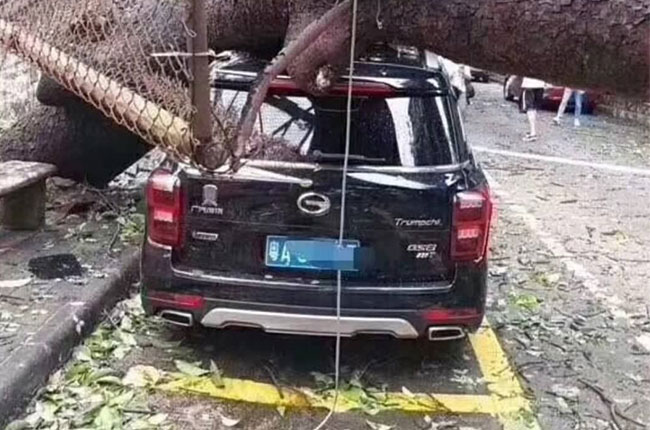 Some may quickly dismiss Chinese cars as low quality and poorly built – but note that this was also the case for some Korean car brands that have already grown to prominence in recent years. A manufacturer has to prove their worth in the eyes of consumers, and they also have to make sure that they come up with a product that delivers satisfactory to stellar performance.

How do they do that though? You can engineer as much rigidity and strength in the chassis as you want, but if people don’t see it in action, then it’s a no-go. A brand may test its cars all year long, but nothing will compare to the real hazards that lie outside of the testing facility.

Related: Can a Hyundai Tucson survive a five-ton boulder?

So the theoretical question of whether a GAC Motor vehicle would survive a head-on collision with a tree is finally answered in one photograph. Yes, it can, and without much structural compromise.

Here's the full image for your reference: In the image above, it appears that the roof of the unit took the brunt of the weight of a giant tree. The incident happened in Guangzhou during the tropical cyclone Mangkhut, otherwise known as Ompong in the Philippines. The GS8 SUV held up well against the forces of nature – quite literally. While the roof is not designed to take the impact of a tree, it is engineered to take the full force of a vehicle roll-over. If you have wondered why A-pillars in vehicles are getting thicker, it’s because manufacturers are now bolstering these metal parts in order to keep the occupants of the vehicle safe from getting crushed.

Going back to the act of nature above, the tree is laying on top of the B, C, and D pillars of the vehicle. The tree itself is not resting completely on top of the roof. The trunk is resting on the ground allowing the GAC to come out relatively unscathed. No crumpling whatsoever here.

The image speaks for itself, but of course, you have the liberty to judge it for yourselves.