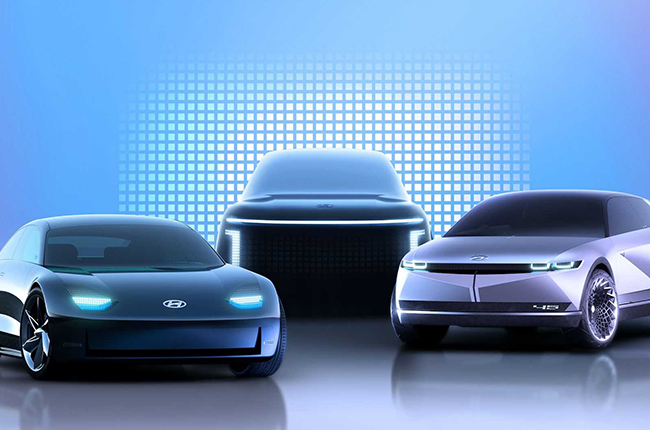 South Korean automotive brand, Hyundai, announced the launch of its new Ioniq sub-brand, which is set to focus on electric vehicles. Through this, the brand shall be able to offer customer-centric EV experiences with an emphasis on connected lifestyle solutions. Its launch was actually celebrated by turning the famous London Eye into a giant letter ‘Q’ using electric lights. This sub-brand was formulated in accordance with Hyundai's goal of leading the global EV market. Notably, the automotive company will leverage the Ioniq brand by introducing three new models over the next four years,   with more to follow. Those models include the Ioniq 5, Ioniq 6, and Ioniq 7, the following vehicles shall then sit on an Electric Global Modular Platform, known as E-GMP, achieving that fast charging capability and plentiful driving range.

The first model to be launched under the brand is the Ioniq 5 which is a midsize CUV. It is based on the recently unveiled concept ‘45’, which was shown at the International Motor Show (IAA) 2019 in Frankfurt. It will be launched in early 2021. The second model is the Ioniq 6, it’s actually a sedan that’s based on the latest concept EV ‘Prophecy’, this model is set to be revealed by 2022. Lastly, there’s also a large SUV for the brand which is known as the Ioniq 7, it will then be launched in 2024.

All Ioniq vehicles shall feature a common theme of ‘Timeless Value’, as all vehicles under the brand will be inspired by past models. In 2016, Hyundai introduced a vehicle named Ioniq, which happens to be the world’s first and only model to offer a choice of three electrified powertrain options including hybrid electric, plug-in hybrid, and battery electric. Soon, the name Ioniq shall represent the South Korean brand’s commitment and innovation in achieving its clean mobility goals.

Through this strategic move, we might just see Hyundai achieve its goal of becoming the world's third-largest automaker of eco-friendly vehicles by 2025. Specifically, with 560,000 BEV sales in addition to FCEV sales.