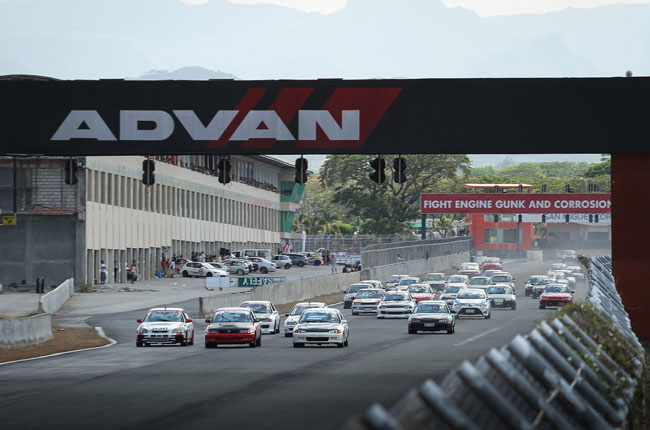 It was an all-out on-track action last April 9, 2016 at the Clark International Speedway (CIS) as Round 2 of the GT Radial FlatOut Race Series (FORS) went underway. A total of 95 drivers battled it out for the win in the Time Trial and Grid Race events, making this the biggest turnout of competitors so far this year.

Enduring the blazing summer temperatures, they coursed around CIS under the watchful eyes of the Automobile Association of the Philippines (AAP). The main man of the day was JC Baguisa who showcased relentless efforts to win both the Time Trials and the Grid Races.

In Bracket A, a blistering time of 2:10.421 took Baguisa to the top. He was then trailed by Eduardo Suiza who’s just 3 seconds behind at 2:13.101. Claiming the 3rd fastest time for the day was automotive tuning expert Mato Tan who clocked in at 2:15.067. Bracket B, on the other hand, saw a much more intense battle between the top 3 finishers Christian Go, Gerard Loy, and Sydney Sarmiento. A mere tenth of a second made all the difference between them with Go clocking in at 2:16.064. Loy came in 2nd at 2:16.201, followed by Sarmiento at 2:16.218.

Meanwhile in Bracket D, Jonnie Pineda, Arturo Pasao, and Polo Bautista filled the podium’s 1st, 2nd, and 3rd spots. Bracket E commenced immediately with Raymond de Pano finishing the fastest at 2:31.220. He was followed in 2nd place by Erwin Manaog at 2:32.366 and Lloyd Puno who clinched 3rd with a time of 2:32.590.

Down in Bracket F, Anthony Richard Lanting achieved a best time of 2:36.424 which placed him ahead in 1st. Not far behind was Robert Tan in 2nd with a time of 2:37.493 and Lars Alonzo in 3rd at 2:37.511. Then there’s Bracket G with the top 3 finishers Karol Jose, Ryan Despuing, and Mark Pascual who finished in that order.

The open class called Bracket R witnessed a 3-way battle between Suiza, Baguisa, and Willie Torres. They crossed the line and stepped on the podium in that order. On the other hand, concluding the Time Trials were the support classes The Perfect Lap and Grupo Toyota. Winning these were Boban and Greg Suing. The Grid Races also went off without a hitch. Moreover, the top 3 Grids A, B, and C, ran simultaneously with a combined fleet of 25 cars. In GT Radial Grid A, Bracket A winner JC Baguisa qualified on pole, but lost it early in the race. Rafael La’O and Eduardo Suiza capitalized on that and went ahead. However, Baguisa regained the lead, thus winning the race. Finishing behind him were Suiza and La’O in that order.

Christian Go bested 8 others in the Smart Fuels Grid B race. Behind him were Gerard Loy and Gabby Sohu in 2nd and 3rd places, respectively. Down in the Competition Clutch Grid C, James Santiago took home 1st, Lesley Tuazon 2nd, and Vanni Garcia 3rd. The GT Radial FlatOut Race Series will head back to the Batangas Racing Circuit (BRC) for Round 3 on May 7, 2016.