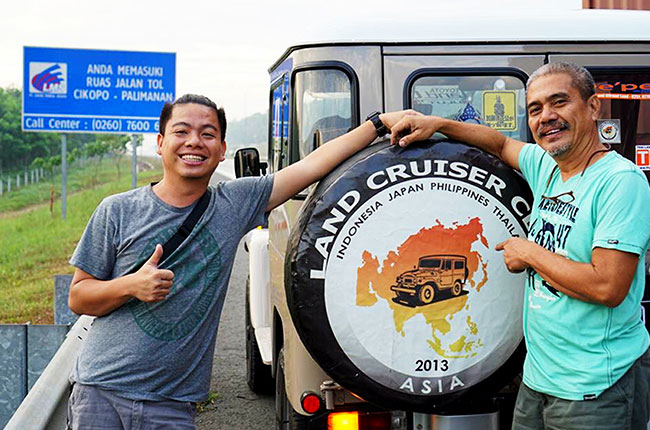 Maxxis Philippines’ 4x4 Cup, called the Off-road Challenge, has been testing the skills and determination of thousands of Filipino motorsports athletes since 2011. Multiple teams have created a name for themselves in this event.

The teams can be professional, or even familial in nature. The love of offroading can sometimes come from influences that are close to home. Maxxis Philippines wants to feature this dynamic –father and son – duo, Noel G. Bartolome Jr., and Noel G. Bartolome Sr. It is very likely that our own parents influence us the most, and in this pair’s case, they’ve taken it a step further since they classify as one of the country’s top contenders.

Related: You can now buy Maxxis motorcycle tires in the Philippines

The duo is one of the most active off-road athletes in the country. Bartolome is a member of the Land Cruiser Club of the Philippines. He is also a regular Maxxis 4x4 Cup podium finisher. In fact, in the Maxxis event’s April leg was when Bartolome bagged 2nd place in track B in Lubao Pampanga, where neck-high lahar pits were not enough to stop him.

Back in 2018, Bartolome got the most podium places in the Maxxis 4x4 Cup, and won 3rd place in the overall driver of the year category. He pays tribute to his father for the support he has been given in pursuing his passion.

I really owe it to my father for introducing me to this energy-filled and heart-pounding sport. Growing up, I saw how he enjoyed the sport and how he was really determined to excel and rule over the toughest off-road challenges. Right then, I knew I’d be joining him on the off-road tracks,
Noel G. Bartolome Jr.
Maxxis 4x4 Cup, Participant

Bartolome Sr. has been in the sport since the 1980s. Over the past three decades, he has netted several local championships, which got him to international competitions such as the Malaysian Rainforest Challenge.

Off-roading is almost like a family tradition for us. I saw the potential of my son so I made sure I play an active role in his entry into the exhilarating sport. Right from the very start, I told him that he must always focus on the track and tediously study the obstacles,
Noel G. Bartolome Sr.
Maxxis 4x4 Cup, Participant

In the past, Bartolome Jr. started racing with his dad in 1996. When the boy turned eight, the two have competed against each other in various off-road challenges. In 2012, the then 25-year old Bartolome Jr. was lauded for conquering a tough off-road challenge in San Felipe, Zambales. While other participants were stopped in this course, the younger Bartolome pushed on. His father was also out on the trails that day, the older’s vehicle got stuck, while the younger’s kept pushing on. The off-road veteran and young prodigy eventually became an unstoppable duo, seamlessly changing between driving and navigating roles, trusting one another with the intention of scoring the highest possible honors their efforts will net them.

Bartolome Jr. continues the family tradition that his father set him on, and now includes his son in this lineage of champions. The young Bartolome is eyeing a three-peat win in the 8th leg of the Maxxis Cup to be held in Ormoc City on June 22 and 23, 2019.