It's no secret that Ford Philippines has been wanting to launch the Next-Gen Ford Ranger and Ford Everest for quite some time now. The Blue Oval brand has been releasing teasers for both models left and right making sure that there is a good amount of hype for when they officially launch. The wait is now over as both models have officially made their debut in the Philippines sporting all-new designs, new variants, and more tech than ever before. First, we start with the Next-Ge Ford Ranger, one of the heavy hitters in terms of sales for the American automaker locally. It now gets a new front fascia that is accented by its new grille design and by its new C-shaped LED daytime running lights paired with LED headlights. This gives the Ranger a more modern look especially with its bumper accent as well. The overall stance of the vehicle has changed to be more rugged and more athletic than ever before. This theme continues with the side profile of the pickup truck and with the rear bed area where it gets LED taillights as well. It also gets side steps at the back to help you better load cargo into the bed of the pickup truck. One thing we found interesting is that for the lower variants of the pickup truck it gets a different set of taillights as these consist of bulbs instead of the LEDs found on higher variants. Much like its pickup truck counterpart, the Next-Gen Ford Everest also gets a similar design. It comes with a much squarer front which is again accented by its large grille and by its C-clamp LED headlights. One thing to note is that, unlike the Ranger, it doesn’t come with a bumper accent.

Moving onto the side and its familiar lines all over again as the Everest retains some of the design language of its predecessor. It's still crisp and clean lines though which help give the vehicle a more premium feel. At the back, the Everest comes with a new set of LED taillights which are now L-shaped giving the vehicle a more muscular look from the rear. 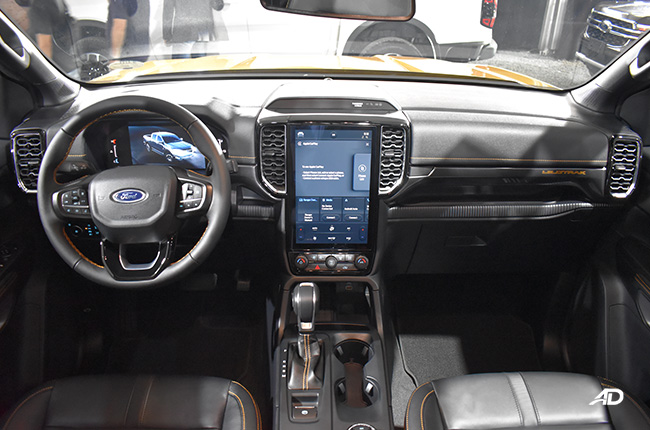 The Ford Ranger and the Ford Everest both share a similar interior layout. The design of the cabin shifts to a more vertical look with minimalism still being the predominant theme. At the center of it all is either a 10-inch or 12-inch infotainment system which will vary depending on the variant chosen. Both vehicles also come with a digital instrument cluster which modernizes the look and feel of the car. One thing to note is that on the Ranger, it still retains its older gear shifter, while on the Everest, its gear shifter has evolved into a claw type instead of a grip type to help distinguish it from its pickup truck brother. You won’t also find door handles on the interior of the vehicle as these have been replaced with grip-type handles found in the door sidings similar to what you would find in the F-150. As previously mentioned both vehicles come with a plethora of technology at their disposal with the 10 or 12-inch infotainment systems being the crowning jewel in the cabin of the vehicle. A 360-degree camera is now present in the higher variants which will aid you greatly when it comes to maneuvering off-road. The infotainment system regardless of size also comes with Wireless Apple Carplay and standard Android Auto as well. There is even a function to doodle on the screen if you wish for a neat party trick for the kids. In terms of safety, both the Next-Gen Ford Everest and the Next-GenFord Ranger have gotten a big upgrade as they both come with six SRS airbags, with the Wildtrak models getting an additional knee airbag. Also standard are ABS with EBD, ISOFIX anchor points, and an engine immobilizer as standard.

For higher variants, they get access to adaptive cruise control, autonomous emergency braking, forward collision warning, lane departure, a blind spot information system with rear cross-traffic alert, reverse brake assist, and evasive steer assist. One thing to note is that the Everest also gets an autonomous parking feature for the Titanium model. Under the hood, the new Next-Gen Ford Ranger drops the old 2.2-liter turbo engine and now adopts the 2.0-liter single turbo and the 2.0-liter Bi-turbo motors. This means that even the entry-level Ranger now comes with more power than ever before. The 2.0-liter single turbo configuration pushes 167hp and 405 Nm of torque. The Bi-Turbo, on the other hand, pushes out 207hp and 500 Nm of torque. Just like before the transmission options are still a six-speed automatic or a 10-speed automatic gearbox. A six-speed manual can also be had, however, this is relegated to just the lower variants of the Ranger. The following are the prices for the Ranger and Everest