October 22nd of the year 1969. For the Z-car fans, this is an important date as Nissan introduces the Datsun 240Z – a legendary sports car that shaped both the automotive market and motorsports alike. With its good looks and exhilarating performance, the 240Z immediately gained popularity, selling over 45,000 units from its launch up until the subsequent model year.

The Datsun 240Z, internally known as the S30, gets a race-tuned version in 1970, carrying the BRE 240Z nameplate while being driven by Peter Brock. It catapulted the Nissan/Datsun name into motorsport stardom, cementing the Z-car’s name in history books.

It’s no secret that the Datsun 240Z started the ball rolling for Japanese sports cars in the U.S.
Ivan Espinosa
Nissan’s Corporate Vice President of Global Product Strategy and Planning

"Almost as well known in Z history is how Peter Brock’s competition-tuned 240Z changed the American motorsports landscape. After the BRE 240Z debuted in 1970, Nissan/Datsun became one of the most successful companies in American motorsports – with thousands of victories over the past five decades,” Espinosa added. The Nissan 370Z 50th Anniversary Edition carries Brock’s BRE 240Z livery, seen in the two-tone finish with dual side strips. This particular race car dominated the Sports Car Club of America (SCCA) racing in the 1970s. With the special edition, buyers can choose from two color options: white with red accents or silver with black accents. The special package will apply to all 370Z variants, including the Nismo versions.

To go with the stripes, the 370Z 50th Anniversary Edition gets a Z badge with the 50th Anniversary branding, along with a special set of 19-inch rims. Inside, 50th Anniversary Logo accentuate parts like the gear lever and headrests. Other updates include a special Alcantara-wrapped steering wheel, floormats, synthetic suede door panels, and special stitching all over the cabin. The availability and pricing of the Nissan 370Z 50th Anniversary Edition in the U.S. are yet to be disclosed at this time, as well as its global availability. Locally, Nissan Philippines has announced that it will bring the famous Z-car onto our shores, along with the Nissan GT-R Nismo, to increase the brand’s footing in the performance vehicle segment  – but we have yet to see that materialize. If this plan pushes through, we hope that we also get the 50th Anniversary Edition here because, really, Z-car fans aren’t endemic to the Western countries and Japan, right? 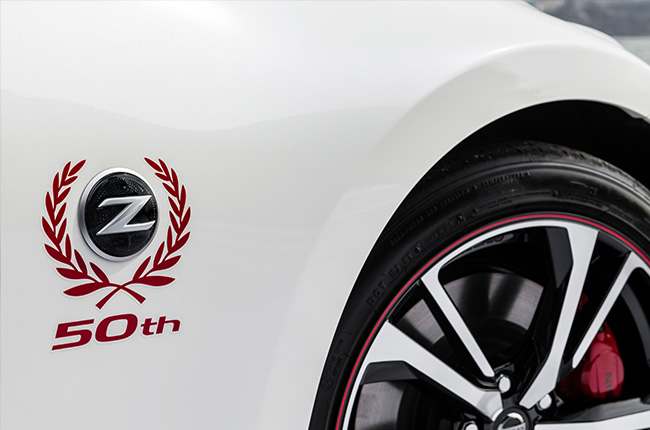