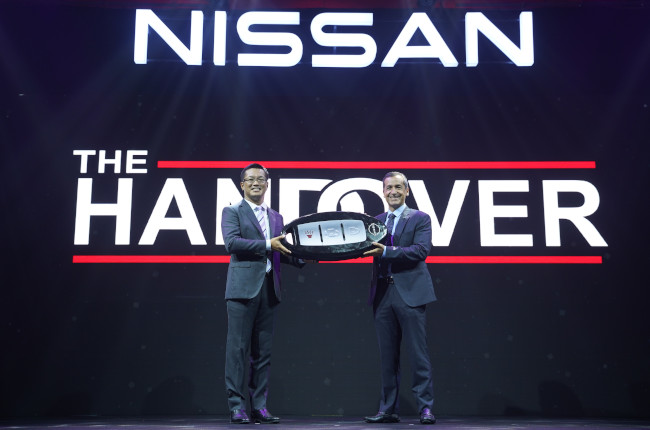 May 11, 2022, Atsushi Najima-san went on stage one final time to address members of the Nissan family and members of the media for the last time as Nissan Philippines’ president. He will be succeeded by Juan Manuel Hoyos.

Najima-san will proceed to his next assignment in India, as the Chief Financial Officer at Nissan India, one of the brand’s biggest markets in the world. The ceremony was not only for the handover, however, as many members of the Nissan family and members of the media sent their regards to Najima-san as he starts a new chapter in his long and storied career.

Nissan Philippines shone bright with Najima-san at the helm, being responsible for some of the best-selling and competitive models out in the industry like the Nissan Terra, the Nissan Navara, and the all-new Nissan Almera. Furthermore, the Nissan LEAF was introduced to the country under Najima-san, spurring the electric revolution for the brand and setting the groundwork for an all-electric future. On top of all of that, Najima-san’s term was also filled with some of the most challenging happenings for the brand in the country, with COVID-19 hampering the country’s economic growth. Even so, Nissan Philippines braved the storm and held on to its third-place spot in the country despite all the setbacks and slowdowns.

"I am excited for Nissan in the Philippines as it charts a new chapter with Hoyos at the helm. His vast experience in the automotive industry will help him sustain the growth that we have established in the last three years, as the country steadily recovers from the COVID-19 pandemic. It is a bittersweet moment for me as I move to my new assignment. My family and I will definitely miss the warmth and hospitality of our colleagues and partners. At the same time, I am proud of the company Nissan Philippines has become through the hard work, passion, and perseverance of its people.”
Atsushi Najima
Former President of Nissan Philippines, and current Cheif Financial Officer of Nissan India

In Najima-san’s place, Juan Manuel Hoyos will take the reigns of Nissan Philippines. Hoyos joined Nissan back in 2017 as a Marketing Director for the Latin American region. He later took the position of General Manager for Global Engagement Brand and was assigned to Nissan’s global headquarters in Yokohama, Japan. Hoyos led management positions in Renault and General Motors prior to becoming Nissan Philippines’ President as well.

Hoyos promises to continue building upon the trust that Nissan has built over the years with its employees, partners, and customers.

"We will continue to focus on our highly dedicated people, excellent products and service, and exceptional customer experience so we can sustain the company's growth trajectory through this management transition. I look forward to further growing the Nissan brand in the Philippines, building upon the solid foundation of trust it has laid over the years."
Juan Manuel Hoyos
President, Nissan Philippines