We’ve seen it on photographs from the 2017 Tokyo Motor Show. The chance for us to see it in metal has finally come. Mitsubishi Motors Philippines Corporation (MMPC) has fulfilled its promise and brought the e-Evolution Concept for showcase at the Philippine International Motor Show (PIMS) that is happening until the 28th of October.

The Mitsubishi e-Evolution EV has got that futuristic appeal on it from all angles – front to rear, top to bottom – matched with sharp character lines found throughout the vehicle, as well as inside the cabin. The crisp update on the ‘dynamic shield’ design still provides the concept car the Mitsubishi signature look even at a quick glance. If you like the appeal of the Xpander, then you’ll admire the e-Evolution even more. Upfront, it’s got a long, squinty daytime running lights, comparable to the ones on the Xpander. The black archetype dynamic shield grille gives it the character – something to make it unmistakably a Mitsubishi. Its slim camera side mirrors are also worth mentioning especially when it flaunts a minimalist vibe.

The cabin is even more promising, as hopping inside it takes you to a futuristic interior. Mitsubishi e-Evolution boasts a cockpit that features a floating instrument panel with a dashboard-size flat screen serving its infotainment system. Also, there are slim A- and B-pillars that pave the way for road visibility. The e-Evolution might be the highlight of MMPC during the first day of PIMS 2018, however, it’s just a part of a four-day motor show. Also on spotlight are the Outlander PHEV and Xpander but MMPC promised to display more cars from the current local line-up, which includes its best-selling models like the Montero Sport, Mirage, and Mirage G4. 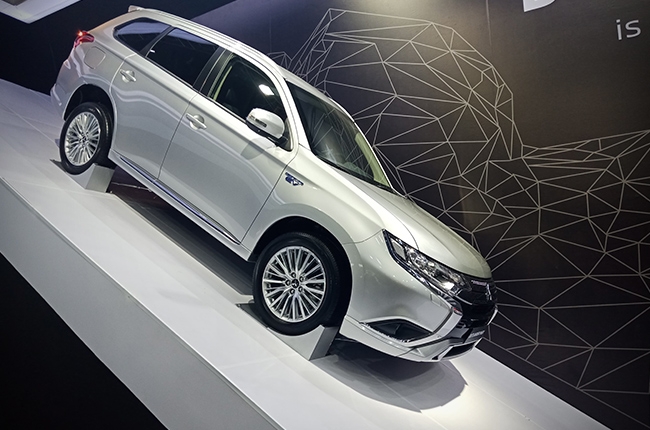 Speaking of Mirage and Mirage G4, you may also get a chance to see the young actress Liza Soberano as she is to make an appearance at the Mitsubishi Pavilion in PIMS on October 27, 2018, Saturday.

Visit the MMPC’s fleet display until this October 28, 2018, Sunday, and get up-close with the Japanese carmaker’s pride: the one-time-only-here e-Evolution Concept.