Not even the scorching summer sun could stop the 105 entries from competing in the 2nd round of the 2017 FlatOut Race Series (FORS) held last April 1 at the Batangas Racing Circuit (BRC).

During the hot morning Time Attack session, it was JC Baguisa who set the fastest lap of the day with a 1:48.440 time, earning him top spot for Bracket R and Bracket A. Coming in at 2nd was 2016 champion Eduardo Suiza who set a 1:49.583 lap time while Dondon Portugal claimed 3rd with his 1:50.457 best.

Bracket B saw familiar faces topping the timesheets with Andrew De Asis in the #23 Honda Civic EG taking 1st with a 1:56.158 lap time. Aaron Lao again was 2nd while Ed Christian Go, who set the fastest time in this Bracket last round, had to settle for 3rd.

On the other hand, Ed Christopher Go outpaced competitors in Bracket C to bag 1st while 12-year old Miggy Sohu and Paul Santos followed in 2nd and 3rd, respectively.

With 13 entries, Bracket G was easily the biggest class of the day. Andre Tan’s effort were rewarded with a 1st place finish, followed by Greg Suing in 2nd, and Noel Delos Reyes in 3rd. 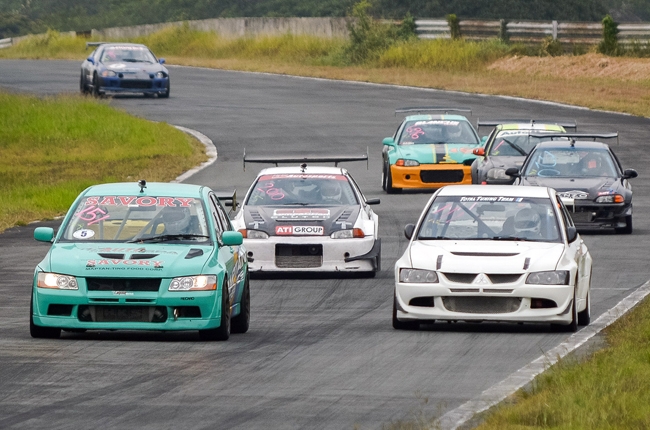 The afternoon Grid Race saw tons of action starting with the 12-lap GT Radial Grid A, wherein the Mitsubishi Evolutions of Richmon Dela Rosa, Dondon Portugal, and Ferdie Sia took the early lead. Unfortunately, Dela Rosa retired on lap 4 while Portugal stopped in the middle of the track on lap 8. Rafael la O’ inherited the lead all the way to the finish line with a 16 second lead over JC Baguisa who completed the race in 2nd. Sia was able to hang on to 3rd until the end.

Patrichk Dela Rosa and his #66 Honda Civic Del Sol dominated the KYB Grid B with a 5 second advantage over the competition. The battle for 2nd was a tight one as Andrew De Asis and Sherwin Bargos fought for position. However, it was De Asis who stayed on top to take P2.

Paul Santos took 1st place in SmartFuels Grid C while Polo Bautista, despite crashing into the barriers, was able to recover and finish in 2nd. Hector Tan completed the podium spots in 3rd.

With 14 cars on the track, the Recaro Grid D saw all drivers fighting for position throughout the race. It was Robbie Alvarez in the silver #207 Honda Civic EG who reached the chequered flag 1st. Raymond De Pano in the small body Toyota Corolla followed in 2nd while Jack Saquilayan took 3rd.

The next round of the country’s premier grassroots motorsports event will again be held at the BRC on May 20, 2017. For more info or inquiries, visit the FlatOut Race Series page on Facebook.