Dondon Portugal dominated the third round of the Petron FlatOut Race Series (FORS) held at the Batangas Racing Circuit. He also managed to set a new lap record at the local race track in his Mitsubishi Evolution VII.

A total of 48 entries took part during the morning’s time attack which saw Portugal shine brightest. He drove his Mitsubishi Evolution VII around the 3.7-km circuit and set the fastest lap of 1:42.573 in the Bracket R. This was enough to beat the previous record by a slim margin of 0.077 seconds.

The grid race, on the other hand, had 32 entries separated into 5 classes depending on the results during qualifying session.

During the 12-lap Petron Grid A race, Portugal enjoyed a lights-to-finish victory. Rafael la O’ crossed the finish line 24.518 seconds behind, followed by Eduardo Suiza claiming the last place in the podium.

Emerson Ocampo, who was way ahead of the competition, looked like he would drive away with the win in the KYB Grid B race. Sadly, Ocampo broke out of the bracket time which demoted him down to third after the penalties were applied. The win went to Paolo Santos while Jonmark Ong was promoted to second. 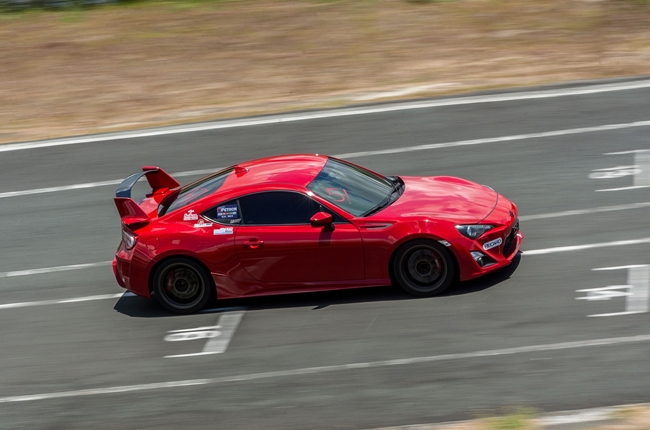 The Recaro Grid C also saw racers get demoted for “driving too fast.” Julian Diego and Sonny De Torres, who were in a tight battle for the win, broke out of their bracket time. Paul Santos inherited the win.

More drivers pushed too hard in the heat of the battle in the Staunch Performance Grid D race as both John Benedict Carbonel and Errol Panganiban broke out. The demotion saw Andre Tan take first, followed by Erwin Manaog in second, and Carlos Marzo in third.

Last but not the least, Mars Ocampo won the SmartFuels 2 Race Grid E battle. Jeff Pobadora and Jun Cabrera completed the rest of the podium places in second and third, respectively.

The next round of the 2018 FlatOut Race Series will be on June 9, 2018 at the Clark International Speedway (CIS). Then it will take a quick break to give way for the Petron 4 Oras ng Pilipinas endurance race on June 12 also at CIS.