All roads led to the Batangas Racing Circuit as the 7th round of the 2016 GT Radial FlatOut Race Series went underway last September 17, 2016. A total of 82 drivers compete in the array of Time Trial and Grid Race events. The country’s premier grassroots racing event started the day with the Time Trials. Taking 1st place in Bracket A was Eduardo Suiza, with his best lap time of 1:50.852. Of note, this is Suiza’s 4th victory this year after dominating with a 3-win streak in Round 6. Trailing in 2nd place was Ferdie Sia who clocked in at 1:52.704, while on 3rd place was Andrew De Asis who crossed the line with a time of 1:53.480.

Bracket B victory, on the other hand, went to Sydney Sarmiento with a lap time of 1:56.158. Joining him on the podium were Gabby Sohu and Ed Christian Go who took 2nd and 3rd places, respectively. Meanwhile in Bracket C, Joey Howard clinched 1st place, followed by Aaron Lao in 2nd and Paolo Lofamia in 3rd.

Down in Bracket D, Miggy Sohu scored a 1st place win with a time of 2:02.162. Not far behind in 2nd place was Sherwin Bargos, who maintains his championship lead by finishing ahead of Polo Bautista. In Bracket E, Romualdo Vasquez had a great run with a 1st place finish over Zebedee Mendoza in 2nd and John Benedict Carbonel in 3rd.

The day’s Bracket F Time Trial event saw Anthony Richard Lanting winning 1st place with his lap time of 2:08.041. He was followed by Lars Alonzo in 2nd and Michael Angelo Turing in 3rd. Bracket G, on the other hand, saw Marc Macas crossing the line in 1st place. Behind him were Robert Tan and Mark Pascual in 2nd and 3rd places, respectively. 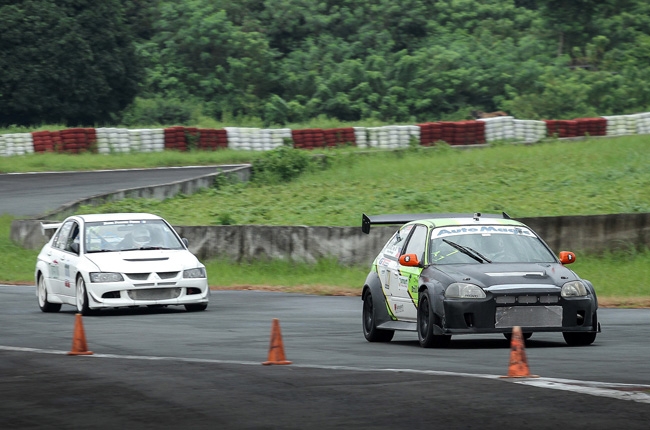 The action continued with the Grid Races. Right off the start, the GT Radial Grid A race heated up with Rafael La’O, Eduardo Suiza, Ferdie Sia, and Dominique Bon gunning for the lead. The first stages of the 9-lap race was pretty tight until La’O took a late charge to finish the race in 1st place. Suiza came in 2nd, while Sia settled for 3rd.

Meanwhile in the Smart Fuels Grid B race, Gabby Sohu crossed the line alone. The reason being is that Ed Christian Go and Sydney Sarmiento were involved in a race-ending contact with each other during the opening lap.

A total of 19 cars were seen on the track for the combined Buddy Club Grid D and Works Bell Grid E races. Sherwin Bargos, Robbie Alvarez, and Michael Suiza completed the Grid D top 3 finishers in that order, with Bargos inching over Alvarez by a mere 0.194-sec gap. On the other hand, Anthony Richard Lanting took home 1st place in Grid E, followed by Leo Candava in 2nd and Romualdo Vasquez in 3rd. See the racing action once more as the 2016 GT Radial FlatOut Race Series heads to the Clark International Speedway on October 22 for its 8th and final round.