The 6th round of the 2016 GT Radial FlatOut Race Series (FORS), the country’s premier grassroots motorsports event, had a total of 97 participants vying for championship points on its Time Trial and Grid Race events.

The racing weekend kicked off with the Time Trial events. Taking victory in Bracket A was Eduardo Suiza who crossed the line with a blistering best lap time of 1:48.294. He’s then trailed in 2nd place by JC Baguisa who clocked in with a time of 1:49.794, just 1.5 seconds behind Suiza. Completing the bracket in 3rd place was Rafael La’O with his best time of 1:50.425.

Rounding off the podium in Bracket B were Ed Christian Go, Gabby Sohu, and Aaron Lao who finished in that order with 1:56.285, 1:55.857, and 1:57.555 best lap times, respectively. On the other hand, Bracket C had a determined Paolo Lofamia taking the top spot. Behind him was Raffy Sohu in 2nd and Vanni Garcia in 3rd.

In Bracket D, Polo Bautista floored it to achieve a 1st place-winning 2:02.282 best time. Trailing in 2nd place was Zachary Mendoza with his time of 2:02.374. Joining them on the 3rd podium position was Julius Beredo who registered a lap time of 2:02.849.

Down in Bracket E, it was a tight battle between John Benedict Carbonel and Hector Tan as the former’s best lap time of 2:05.154 was just a fraction of a second ahead of the latter’s 2:05.155 time. Jun Cabrera joined them in 3rd place with his time of 2:06.021. Meanwhile in Bracket F, Aian Serrano clinched 1st place ahead of Anthony Richard Lanting in 2nd and Romualdo Vasquez in 3rd.

The action was also hot in Bracket G as Anton Moncupa blazed through the finish line and stopped the clock at 2:11.428. He dominated 13 other racers including Mars Ocampo who settled for 2nd place with a time of 2:11.914. Andre Makkina Tan rounded off the podium in 3rd place with his best time of 2:11.931.

Bracket A’s 1st place finisher Eduardo Suiza saw another chance atop the podium as he also dominated Bracket R. Behind him in 2nd place was Sam Avila, while JC Baguisa took 3rd. As for the support races The Perfect Lap and Grupo Toyota, the winners were Keng Pascual and Marc Macas, respectively. Despite the cloudy weather and occasional light drizzles, the Grid Race events pressed on, starting with the GT Radial Grid A race. For the 3rd time that day, Eduardo Suiza graced the No.1 podium position. On 2nd place was Don Don Portugal who’s then trailed in 3rd by JC Baguisa.

Meanwhile, the Smart Fuels Grid B race only had 2 people winning championship points. They were Ed Christian Go and Gabby Sohu who crossed the line in that order. It would have been Sydney Sarmiento’s chance to take the No. 3 spot, if not for his retirement on lap 8. Dominique Bon, on the other hand, failed to participate in the race. Down in the Competition Clutch Grid C race, Joey Howard gave his best to take 1st place. Vanni Garcia settled for 2nd, while Raffy Sohu finished in 3rd.

The 2016 GT Radial FORS Round 6 had the Buddy Club Grid D and the Works Bell Grid E combined to form a 23-car playing field. While most of the participants in the Buddy Club Grid D race were given 60- to 180-second penalties due to time issues, the event still saw 3 men winning championship points. They were Raymond De Pano, John Benedict Carbonel, and Hector Tan who crossed the line in 1st, 2nd, and 3rd places, respectively.

Lastly in the Works Bell Grid E race, Anthony Richard Lanting ended the day with a 1st place victory over Jack Saquilayan who took 2nd. They were joined in 3rd place by Florentino Gonzales. 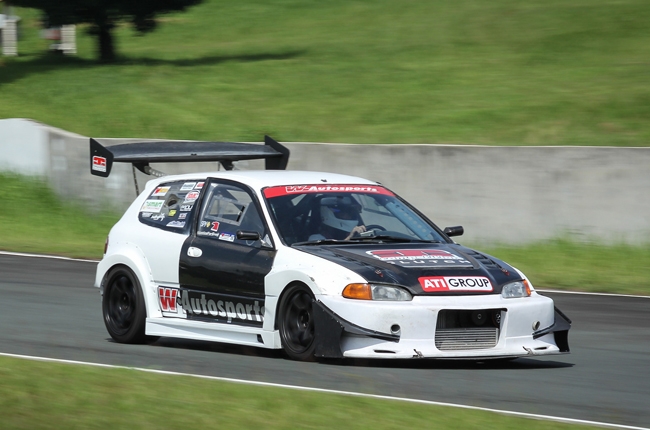 Catch the action again on September 17, 2016 as the GT Radial FlatOut Race Series holds its 7th round at the Batangas Racing Circuit.