Suzuki Philippines is starting 2020 strong with yet another new model set to join its local lineup. Aside from the XL7 which is slated to be launched in March, another small subcompact crossover will also be entering the market. The new vehicle in question is the Suzuki S-Presso, a small city runabout vehicle. It has the proportions of a small hatchback but has a taller than normal ride height giving it crossover-like ground clearance.

Related: Suzuki XL7 to launch in Philippines by March 2020 to rival Rush, BR-V A couple of S-Presso units have already been spotted in the country, in the port of Batangas.Thanks to photos from our colleagues at Visor.ph we got a quick look at what the small subcompact crossover looks like. The vehicle features a tall front face with halogen headlights flanking each side. Connecting the two housings is a black bar that comes with two chiseled accents on each side with the Suzuki emblem in the middle. The S-Presso takes in air via two grilles located on the bumper of the vehicle. While these are large, they do come with an odd design choice. The grilles only let in air through one side. 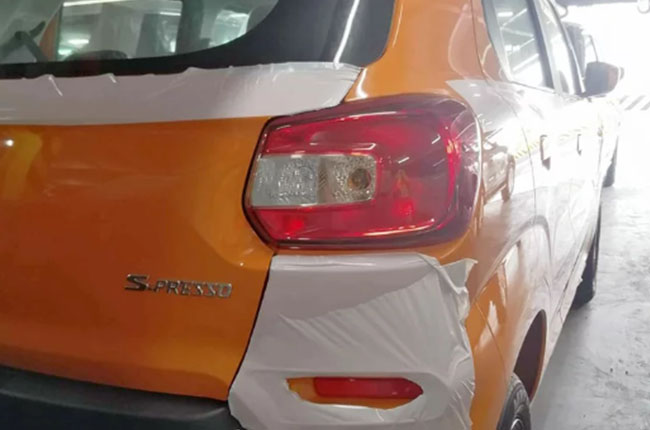 Over at the rear of the vehicle, it comes with angular lines and a simple tail light assembly. A red C-shaped segment encompasses the signal and reverse lights. Another noticeable detail is that the local units could be launched with steel wheels instead of alloys.

Curious to know what powers the S-Presso? Over in India, the vehicle is already on sale. In the Indian market, it is powered by a 1.0-liter engine. This is the same powerplant found in the Suzuki Celerio hatchback. Power figures are about the same coming in with 67hp and 90Nm of torque. Based on India specs the gasoline fed engine could come with either a 5-speed manual or an automatic gear shift transmission.

While there is no official word from Suzuki Philippines yet about when exactly the S-Presso will launch in March, it’s not hard to see that the Japanese brand has something great planned for 2020.