Toyota has recently unveiled the all-new 2020 Harrier crossover in Japan. The release marks the 4th generation of the vehicle which is set to premiere in other countries later this year. There is no official word yet if Toyota Philippines will bring in this model for the local automotive market. Setting it apart from its 3rd generation the all-new crossover now rides on the TNGA based GA-K platform. It is also set to debut with anew gasoline variant and with new hybrid variants as well. With the aim of a more fuel-efficient vehicle, Toyota has opted not to carry over the old 2.0-liter turbo gasoline engine. Compared to the older generation of the Harrier the 4th generation vehicle comes with a more sleeker look. The vehicle still retains a relatively long hood but now mixes in some Lexus style design elements with a set of new LED headlights. While it still retains the same shape as the previous generation it does get a few sleek creases along the sides of the vehicle and on the front bumper. Moving on to the rear the 4th generation has opted to ditch the large tail lights and has gone with a sleeker and rear lights instead. These now extend towards the center of the tail gate and meet at the rear Toyota emblem giving the vehicle Tron-like futuristic look. The rear bumper also gets a rework for the new generation coming in with a chrome garnish at the bottom flanked by two reflectors. 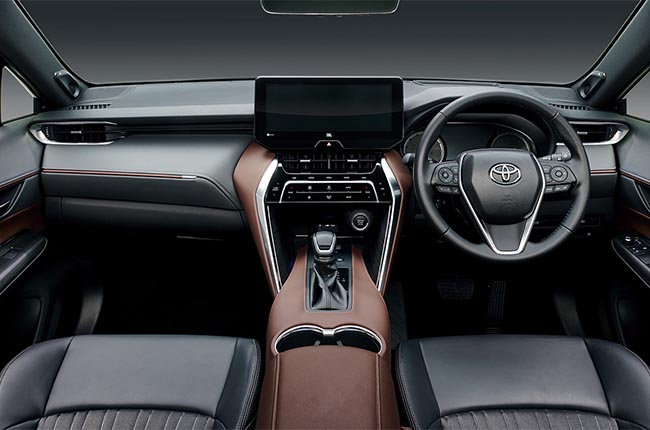 On the inside the all-new Harrier comes with a digital inner mirror which also acts as a dashcam, which is a first for a Toyota vehicle. The mirror can not only see what's in front of the vehicle but what is behind it as well. For infotainment the crossover comes with a 12.3-inch TFT wide touchscreen-display, T-Connect and a SD Navigation, SmartDeviceLink as well as Apple CarPlay and Android Auto capabilities. Sound has now been improved as the vehicle comes with a JBL sound system with 9-speakers. As standard the vehicle will come with Toyota’s safety sense and Active Cornering Assist. 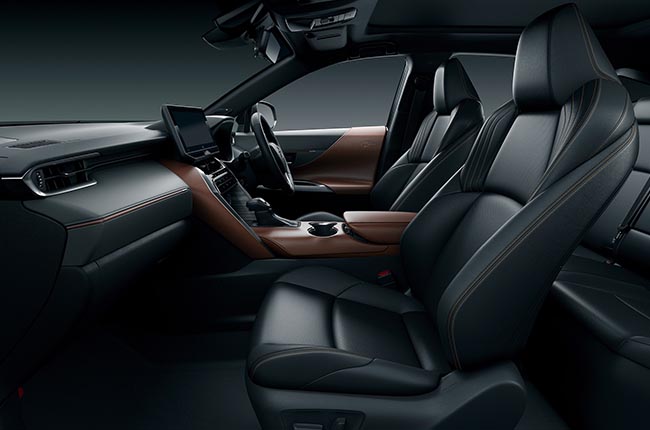 The upholstery has also been upgraded as it now comes in synthetic leather and with wood trim accents and piping. With the use of brows,grays, and blacks, Toyota says these help create a cabin that is “chic and mature.” Another standout feature for the vehicle is a panoramic sunroof which is another first for the Japanese automaker. For added convenience the hybrid variant also comes with a 1,500 watt 100V AC power outlet which enables the use of household electric items. This also lets the vehicle double as an electric generator in times of power outages.

The all-new 2020 Toyota Harrier now comes with two new engine options. The first is a naturally aspirated 2.0-liter gasoline engine that produces 168hp and 207 Nm of torque. The other is a 2.5-liter hybrid power plant. The hybrid system comes with two outputs depending on the drivetrain layout. If you opt for the Front-wheel drive variant the hybrid system will give the vehicle 215hp. The AWD hybrid variant on the other hand 218hp with the aid of a rear-mounted electric motor. The combined output for torque for the Hybrid systems is still unknown but the 2.5-liter engine without the hybrid system is said to be able to make 118hp and 207 Nm of torque on its own. Transmission options for all the all-new Harrier’s variants will remain the same coming in the form of a CVT. The 2.0-liter variant, however, will be getting a new Direct Shift CVT unit as standard. While the 2020 Toyota Harrier does come with interesting features that could be well suited for the local market, Toyota Philippines has not made an official announcement with regards to the vehicle. Heres to hoping that this new crossover could be adapted for our local automotive market.