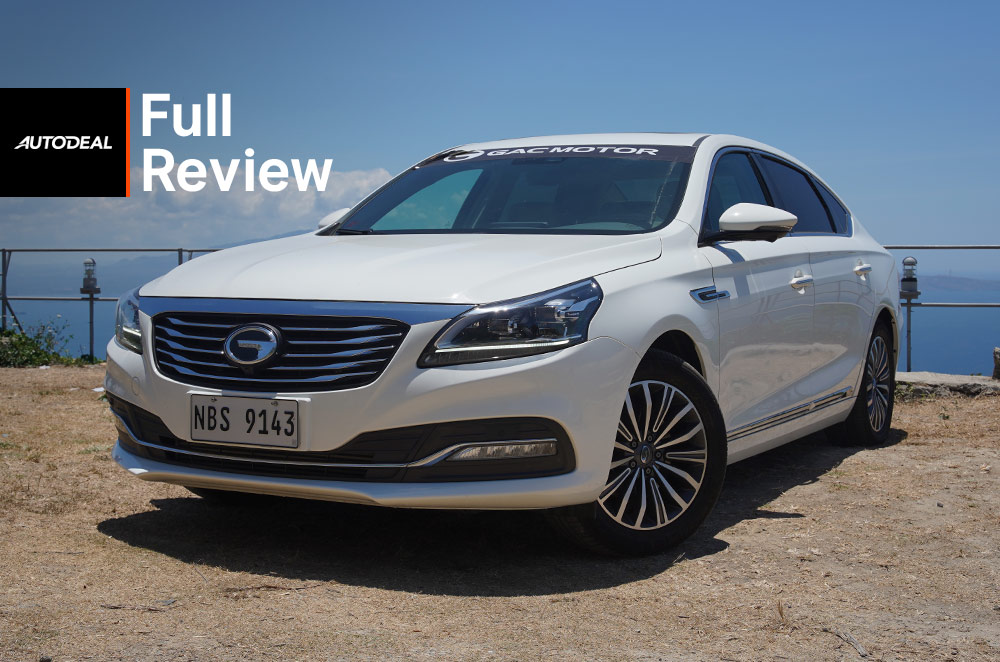 When it comes to Chinese cars, Filipino car buyers tend to be a little more dubious than considerate. No one can blame one, though, as tradition is a shared part of every household – we find it hard to accept new ideas outside the area of things we got used to. This is one of the major challenges of Chinese car manufacturers, like GAC Motor, which has entered the country in the past couple of years. Despite these challenges, it seems like cars from these manufacturers are keeping up with the expectations.

GAC Motor officially entered the Philippines in November 2018. That was the time when it launched five nameplates in the subcompact sedan, executive sedan, subcompact crossover, midsize crossover, and minivan segments. One of them happened to be the GA8, which is the company’s executive sedan. Straight up, I think it is a really good-looking car, which appeared to have been inspired by European vehicle styling. Luckily, GAC Motor Philippines lent us the top-range GL AT variant.

Performance
Engine Output (HP), Acceleration, Transmission, Handling 4.0/5
Design
Exterior & Interior Design, Quality, Fit and Finish, Ergonomics 4.0/5
Ride Comfort
Cabin Comfort, Suspension, NVH Insulation 4.5/5
Safety and Technology
Convenience Technologies, Active and Passive Safety Features 4.0/5
Value for Money
Amount of the vehicle you get for the price, Fuel Efficiency 3.5/5
What You Will Like
What You Won't Like
How We Do Our Reviews 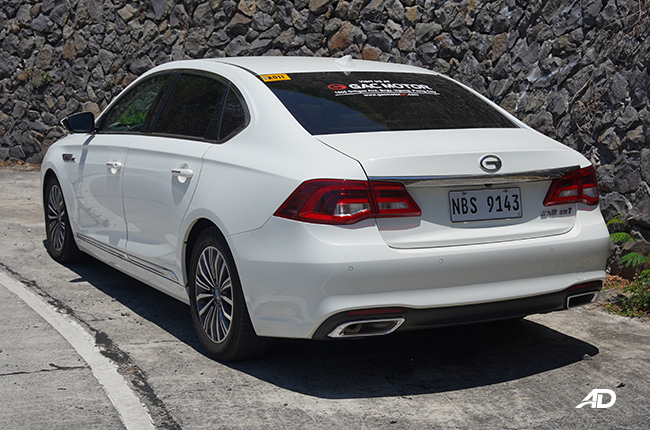 A couple of years ago, the local market already had a good number of Chinese brands. However, none of them dared to market luxury and venture into the premium market. Rather, most were after winning the hearts of the masses by introducing affordable models. Now, other existing brands are coming up with interesting model designs, such as BAIC, MG, and JAC. However, GAC isn’t just all about hip and cool designs. Based on its current lineup, it aims to project its logo more on the premium market with high-grade comfort and classy design executions.

As far as I see it, the GA8’s exterior design is somehow inspired and based on the design of German car manufacturer Mercedes-Benz. Knowing that it’s marketed as an executive sedan, I think designing it close to the European style is a good start. Euro cars already have attached themselves to ‘luxury’ – they are pretty much the embodiment of the term. The GA8’s front exhibits chrome accents on and around the grille but for some reason, those did not turn me off. The LED headlights have this interesting shape that is neither simple or too ornate; it fits my taste and went well with the entire front. Lastly, there is a one-piece black lower intake that houses the fog lamps.

On the side is a long crease extending from the headlight, all the way to the taillight and just right above the door handles. A lower character line, on the other hand, is located above the chrome accents on the bottom of the door. These, along with a tiny chrome side accent give a swept-back impression on the side. I also like how upscale the rear looks from different angles, although it isn’t that flashy – just like the way it should be. There are rectangular exhausts that are kind of misleading at first because if you look closer, regular pipes are actually concealed behind. 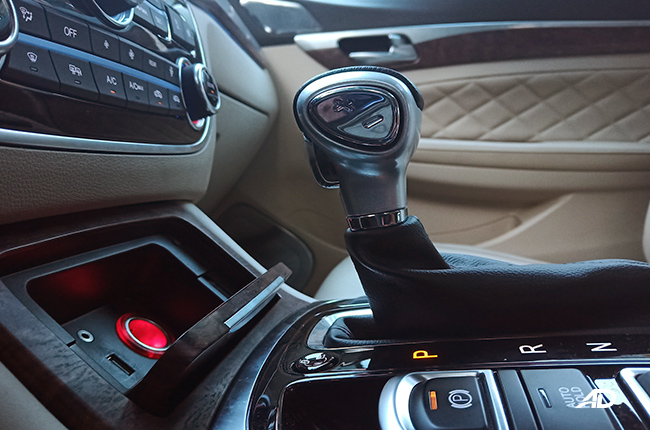 Apparently, the segment where the GA8 belongs isn’t just all about the exterior. Since it’s an executive sedan, it is designed to cater to a more upscale lifestyle. Business trips around the city, especially in a country as hot as the Philippines, would require high-tier comfort – more importantly to the person sitting at the back. GAC addressed this by making the cabin vibrant with the beige leather and faux wood trims.

The dashboard gets this symmetrical wing-shaped wood trim with an anodized silver accent that divides everything upfront in half. The upper dashboard section contains the entertainment system, air-conditioning vents, the semi-digital instrument cluster, and a contrasting dark textured soft plastic. There is the GA8 emblem that sits in the middle of everything, which I think is a cool touch. The lower dashboard is where it gets a little cluttered. Almost 30 buttons are squeezed in along the center console with three large dials, buttons around the gear stick excluded. Good luck with that, I guess.

As for comfort, I’d say I didn’t mind the summer heat the whole time I have the GA8 with me, thanks to its three-zone automatic climate control. The A/C system cools the driver, passenger, and rear areas of the cabin almost instantly and it has a built-in air-purification feature for smoking passengers. If you’re concerned about the cabin’s roominess, there is a lot inside the GA8. Three full-grown adults with average height around 5’7” could comfortably sit at the back without compromising their seating position. The rear passenger windows come with retractable sun shields on both sides. The front and passenger seats, on the other hand, has memory function supporting up to four seating profiles.

Luggage room is pretty huge, too, as it can handle 500 liters of cargo based on the spec sheet. We were able to load four large knapsacks, a large duffle bag, a box of groceries, two boxes of beers with 10 bottles each, and there’s still room for more. Also, you may access the trunk through a small door on the rear center stowage, which will work with two rear passengers. Audio quality is not the best out there but it’s also not bad. 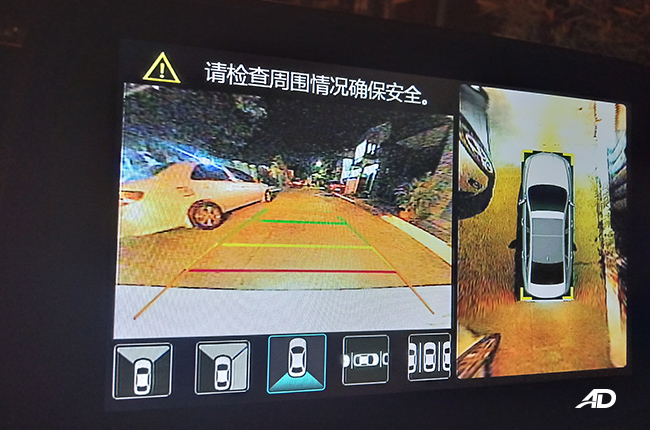 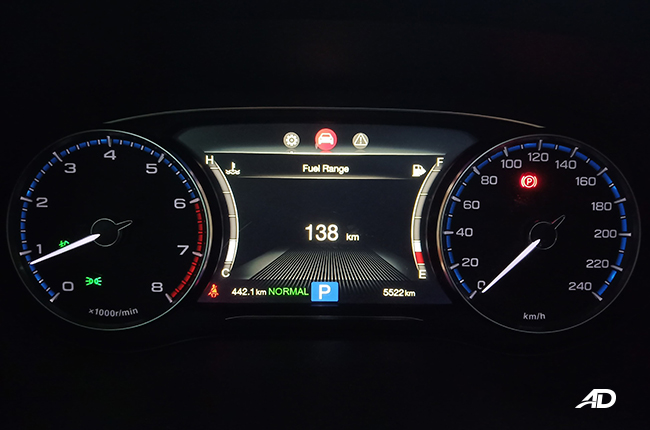 With a good number of technology features to talk about, I barely know where to begin. The obvious thing in the cabin is the floating 10-inch color touchscreen display so let’s start with that. Apart from showing in-car information, the screen projects a 360-degree bird’s eye view of the vehicle whenever you’re backing up at the parking lot. You may also toggle this by pressing the second to the bottom switch on the right-hand side of the gear stick, the one with the video camera icon on it. This projection includes four different option views that you may select from. It even has parallel and perpendicular parking assist to make life easier.

Two of the cameras are found beneath the side mirrors, where a laser projector also sits on to cast the “G” logo on the pavement. These side mirrors fold automatically when the driver exits and locks the vehicle. Another helpful feature is the cornering lights that are triggered when steering to a certain angle, as well as when flicking the turn indicators. Other features include automatic headlights, cruise control, auto dim rearview mirror, start-stop engine, remote tailgate switch, as well as real-time tire pressure monitoring.

However, I slightly felt bad about the camera’s low resolution, especially when driving at night. Headlights from oncoming vehicles may have the tendency to blind you as the driver. The touchscreen could also use a slight tilting towards the driver side, as I find it hard to glance at it, especially when there’s a sunlight glare. There are six airbags cradling the interior: dual front, side, and curtain airbags. The rear is integrated with ISOFIX anchors where you could attach your baby car seats, as long as it supports ISOFIX. Also, the car has an electronic parking brake with auto hold as the default hand-operated braking system, complementing the car’s push-button key technology.

Other safety features include parking sensors on the front and rear bumpers, impact-sensing door unlock, seatbelt reminder, anti-theft system, and an engine immobilizer. Altogether, these are the features you’d usually see standard across the segment. Other features may be better on some other models like passive tailgate control, remote engine start, active park assist, and adaptive headlights. But, for the price range, I could say it’s somehow a good deal. Keep in mind that rivals in the segment could be double or triple in price so I guess P2 million is not bad for a posh executive sedan. Under the hood of the GA8 is a turbocharged 2.0-liter engine that powers the car with 194 hp and 300 Nm of torque. This engine sounds great when you pick up some speed on the highway.

In fact, the engine is a bit aggressive, as you could reach 3,000 rpm easily with slight inputs on the pedal. However, the power under the hood is inferior compared to one of its closest rivals, the Chevrolet Malibu – although the differences aren’t that big. The roar is satisfying even when the windows up, so as the braking power.

I have to mention, however, that there’s jerkiness when in traffic jams. The low gears of the 6-speed automatic transmission abruptly shift on certain inputs but only happens occasionally. Cruising at 90 to 100 km/h holds the RPM somewhere between 2,000 and 3,000, where the ride is the smoothest. You may also switch to semi-manual if you like to have fun behind the wheel but for some odd reason, I wasn’t able to make the +/- on the lever work.

Steering is just the way I expected it; there’s some weight on it but not really noticeable. It’s better that way than the feather-light steering, which I notice is a thing on Chinese models. Oh, the cornering lights at night somehow add to the fun of it, especially in areas with few outside sources of light. Another concern is the low approach angle on the front, which makes driving it off an inclined parking space hard. 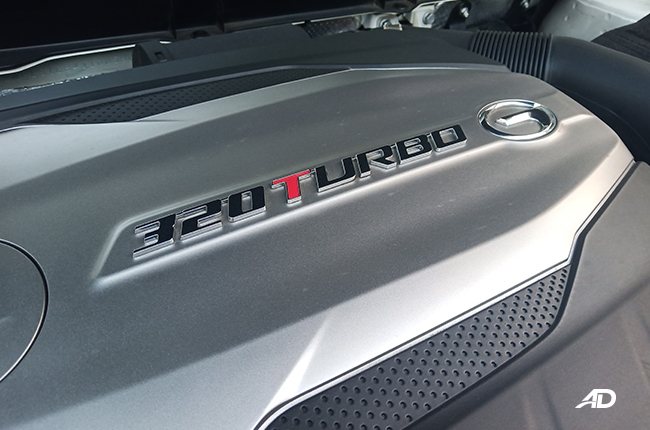 The GA8 falls in the middle of a thrifty and gas-chugging frenzy car. I’d say I still find it decent for its class. Driving at an average 90 km/h along SLEX to STAR Toll read about 12.6 km/L, which is down by roughly 3 km/L versus the Chevrolet Malibu. However, the GA8’s fuel tank capacity is a whopping 70 liters, which is enough for driving from Makati City to Mabini in Batangas and back. Driving through traffic, however, could be painful for your wallet as I was able to get a reading of 6.8 km/L. Okay, let’s establish it this way: the GA8 isn’t a car marketed to everyone. If you’re looking for a daily driver small enough to fit anywhere and drives like a go-kart, this is not the car you would want. Another affecting factor is your budget, as this car is far more expensive than your regular subcompact or compact car, even more so than some crossovers and SUVs. However, the fact that it’s priced around the P2-million mark in the executive sedan class is pretty eyebrow-raising.

The top-range GA8 GL AT is priced at P2,288,000 – quite a number but, of course, it’s a car that you’d rather ride as a rear passenger than be driving; it’s a car meant for comforting you on your business trips. Don’t get me wrong though, as I am not saying you wouldn’t want to drive it for the reason that it’s not fun. As a matter of fact, it is. It has the power, a good roaring sound, the tech, the comfort, and safety features everyone needs.

Surely, the GA8 isn’t a car for everyone—it could be if we take the idea of a limited budget away. Obviously, it can’t compete with regular compact cars and even crossovers and midsize SUVs in terms of price. That’s because it’s not meant to do that. Its market is geared toward a higher-end aspect of living. Even if so, it still is the most affordable in the class so I’d say, not bad.