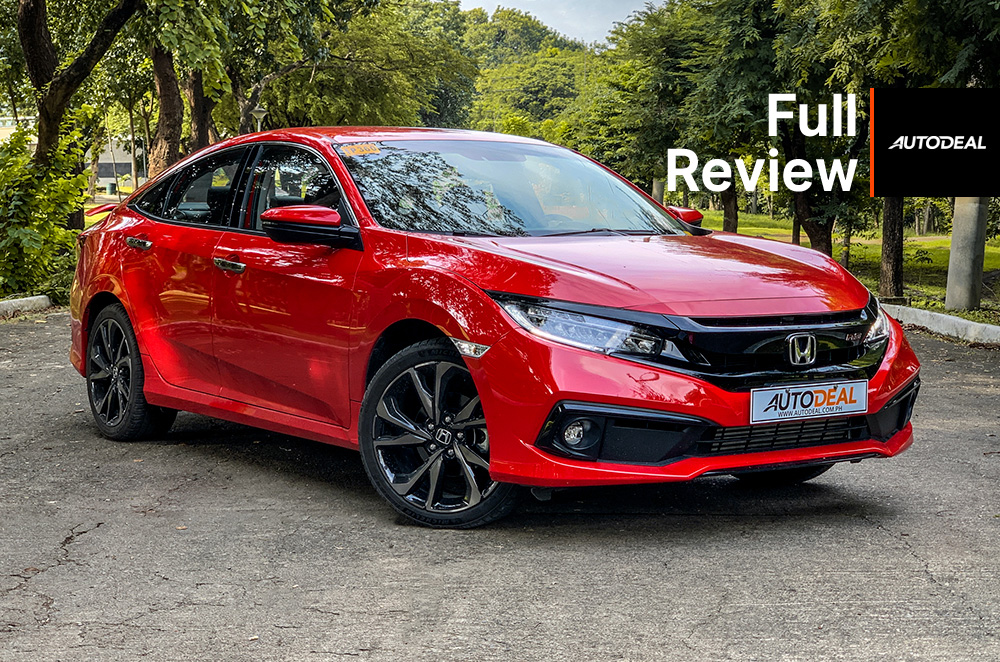 It has been more than three years now since Honda Cars Philippines launched the 10th-generation Honda Civic. But until now, the sight of a Civic on the road doesn’t hurt my eyes as much as other mainstream cars do. That holds true even with the introduction of other sedan options out there, which saturates the market for those looking for a low-riding, compact family vehicle.

In short, the Civic remains an edgy sedan that’s designed to stand out. This year, HCPI gave it a very minor refresh inside and out, and here’s our Honda Civic RS Turbo review based on the changes employed by the marque.

Performance
Engine Output (HP), Acceleration, Transmission, Handling 4.0/5
Design
Exterior & Interior Design, Quality, Fit and Finish, Ergonomics 4.5/5
Ride Comfort
Cabin Comfort, Suspension, NVH Insulation 4.0/5
Safety and Technology
Convenience Technologies, Active and Passive Safety Features 4.0/5
Value for Money
Amount of the vehicle you get for the price, Fuel Efficiency 3.5/5
What You Will Like
What You Won't Like
How We Do Our Reviews While the more affordable Honda Civic E gears towards being classy rather than sporty, the Civic RS Turbo has a full-on athletic design even with just color differences from the former. The RS Turbo is adorned with a shiny black grille, an 18-inch RS Design Black alloy wheels, and a wing-type spoiler. These replace the shiny stuff you’d find on the lower variant, giving the RS Turbo a sporty edge in terms of looks.

For its facelift, the Civic RS Turbo gets a continuous block of black lower grille that flanks across the foglamp casings. Plus, the LED DRLS, headlights, and fog lights make the car look really good at night. The outside changes are minute but a good-looking car doesn’t really need too much update, does it? And besides, as I’ve mentioned previously, the 10th-generation Civic’s looks aren’t getting older – just yet.

If there’s any qualm, I’m not a fan of the screaming Rallye Red paint scheme of the media unit. But if that’s your cup of tea, you do you. The sportiness of the Civic’s exterior design transcends into the cabin, primarily because of the checkered accents on the leather seats that are partnered with red stitchings. There’s also more depth inside the vehicle, primarily because of the red stitchings and graphic adornments found on the dashboard and door cards. With these updates, the new Civic RS Turbo is livelier than before, which, in combination with the low seating position and well-bolstered seats, elevates the engaging feel behind the steering wheel. The red ambient lighting is the final recipe to the mix, which matches the media unit’s exterior color.

Although, I would like to point out that the updated Civic’s dashboard is a bit tall this time around, so positioning yourself in the lowest seating position would mean less visibility. Nevertheless, other sensibilities inside the cabin like buttons, knobs, cubbyholes, and cupholders are well thought out – including the hidden USB, 12V, and HDMI ports underneath the central tunnel. 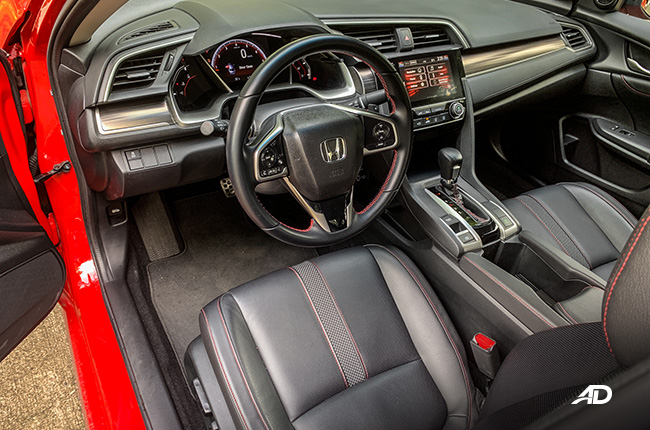 The Civic RS Turbo’s ride is a bit stiffer than the lower variants primarily because of the bigger set of rims that this car has. It remains flexible, though, and going over unforgiving thoroughfares. What you will like, however, is the less pliancy on winding roads, which can give you better control when tackling curves at speeds. You can also thank the Civic’s relatively low center of gravity for that.

As for space, the Civic has lots of it even at the back. Three healthy people on the rear seats would limit each individual’s privacy, but it won’t be a squeeze. Air conditioning works sufficiently even during hotter parts of the day. And yes, even without the rear A/C vents.

Trunk space defaults at 519L – big enough for a standard-size child stroller and one month-worth of groceries. As a range-topper, the Civic gets all the bells and whistles that Honda could offer in a compact sedan. A digital instrument cluster will greet you upon ignition, plus the Apple CarPlay/Android Auto-capable 7-inch touchscreen infotainment now has tactile knobs and buttons for easier operation. Kudos to Honda for that.

Everything works seamlessly and without any gripe. But with newer segment rivals getting radar-based features this year, I can’t help but wonder if Honda will ever add Honda Sensing on its compact sedan offering, considering that its rivals are similarly priced, if not lower. Just like its convenient features, the Civic RS Turbo is also filled to the brim with safety toys. Standard in this variant are dual front, side, and curtain airbags, ABS with EBD, vehicle stability control, ISOFIX child seat tethers, and seatbelt reminders for the front occupants.

Security, on the other hand, is taken care of by immobilizer, alarm, and walk-away automatic lock. The latter is a heaven-sent feature since it takes out the anxiety of remembering whether you were able to lock your car or not. Without any engine update for this year, the Civic RS Turbo retains its spritely yet controlled performance on the road. The turbocharged 171-hp 1.5L DOHC VTEC provided a healthy portion of the 220 Nm torque as early 1,700 RPM.

Within the city, the car wasn’t lazy and remained obedient at any driving conditions. However, the proprietary Earth Dreams CVT, although better than most CVTs out there, held back what the car could possibly do out in the open. Changing speeds would warrant frequent use of paddle shifters, but that’s fine as they’re almost on point in simulating gears for the car to use. Almost, but not quite.

The Civic RS Turbo handled better than its naturally-aspirated counterpart, primarily because of its stiffer ride. Body roll was present on fast corners but one that wasn’t expected. After all, the Civic is still a mainstream family sedan, no matter how sporty it looks. With that said, maneuverability within tight streets was a cinch because the car didn’t feel huge at all and the steering feels light – even too light sometimes. Honda’s use of Earth Dreams CVT is primarily for better fuel economy, and it didn’t disappoint me during the review. Amidst heavy city traffic, the Civic RS Turbo read back 8.3 km/L while averaging 15 km/h. Faster Sunday drives, on the other hand, gave back 13.4 km/L with an average speed of 60 km/h. The compact sedan was most frugal on the highway at 18.6 km/L with the cruise control nailed at 90 km/h. The updates this year gave the 2019 Honda Civic RS Turbo a fresh look, a better in-cabin feel, and sadly, a higher price tag. At P1,608,000, Honda’s compact sedan is a victim of heightened excise tax rates. Crossing the P1.6-million mark didn’t do the car any favor, especially for the budget-conscious Filipino car buyers.

But then again, a storied nameplate that looks and drives this good is hard to dismiss, and I’m pretty sure a lot of its fans would agree.