The Philippines has become an SUV country. The practicality of having seven seats, increased ground clearance, and diesel engine fits just right into what Filipino car buyers want and need. But popular midsize SUVs that ride on a pickup platform aren’t without fault, and that’s where midsize crossovers come in, such as the fourth-generation Hyundai Santa Fe.

Armed with the same practicalities that midsize SUVs offer, the Santa Fe has something that these body-on-frame vehicles don’t – impeccable ride comfort. It also has something else, which is a higher price tag.

Naturally, this begs the question: Is the Santa Fe worth the premium if you’re looking for a seven-seater? Here’s our full review.

Performance
Engine Output (HP), Acceleration, Transmission, Handling 4.0/5
Design
Exterior & Interior Design, Quality, Fit and Finish, Ergonomics 4.5/5
Ride Comfort
Cabin Comfort, Suspension, NVH Insulation 4.0/5
Safety and Technology
Convenience Technologies, Active and Passive Safety Features 4.5/5
Value for Money
Amount of the vehicle you get for the price, Fuel Efficiency 4.0/5
What You Will Like
What You Won't Like
How We Do Our Reviews 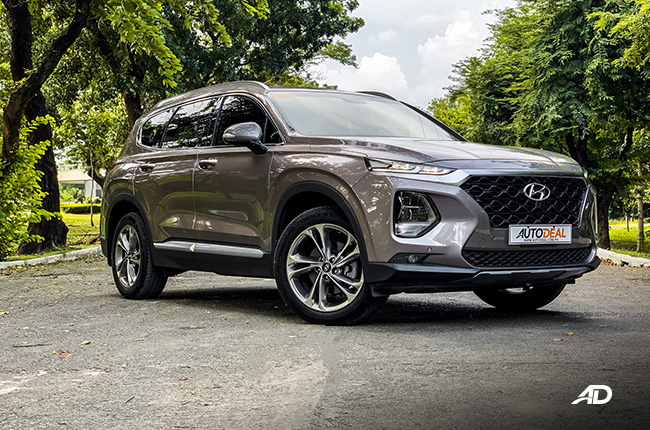 My memory of the Hyundai Santa Fe stems a decade back when I was regularly driving a second-generation Santa Fe. The latest generation I tested for this review retains the bulky appeal of its predecessors, which is a good thing. However, I can’t deny that the fourth-generation Santa Fe has improved a lot from before, primarily with the set of exterior features it carries.

This time around, the Santa Fe is equipped with a full LED affair, most notable of which is the LED projector headlights with Dynamic Bending. I also love the look of the LED taillights. The intricate details give character to the all-new Santa Fe. Well, at least from the rear end.

As a crossover, the Santa Fe doesn’t have the same ground clearance as with body-on-frame SUVs, but it’s enough to make the vehicle taller than most cars on the road. Plus, you have a set of good-looking 19-inch rims to give you the added height. Considering its price tag, Hyundai did a great job in adorning the Santa Fe’s interior with plush materials while employing a cohesive and logical layout. The smooth black and brown leather, the soft-touch plastics, even the haptic feel of the buttons and knobs match the price point. There are some hard plastics, yes, but they’re mostly on the hidden parts of the cabin. The suede-like headliner is my favorite amongst the cabin niceties.

Another laudable thing about the Santa Fe is the amount of space inside the car, and the several storage spaces up to the last row. For family and barkada trips, the Santa Fe has got you covered. First and second rows don’t have issues with creature comforts and legroom, while the third, as expected, is better for children or your least-favorite people. But for the record, I stand at 5’6” and I think I would be able to survive two straight hours at the third row before I complain about my legs – provided that those sitting at the second row aren't selfish and are willing to slide the seats forward for a better third-row knee-room. However, the trunk is a little short on space as a standard-sized stroller didn’t fit with the third-row backrests up. The cargo space expands greatly when the backrests are folded flat to the floor (via one-touch buttons), but that’s at the expense of fewer passengers.

As for the ride comfort, the Santa Fe’s front McPherson/rear multi-link suspension setup is the very reason you’ll choose this vehicle over the more popular pickup-based SUVs. It’s very pliant, at the very least, and doesn’t easily rattle in the presence of road imperfections. Deeper potholes, however, would shake the cabin, but it isn’t jarring. The engine is a bit noisy from the outside but with the superb NVH insulation, you won’t hear any of it inside the car. 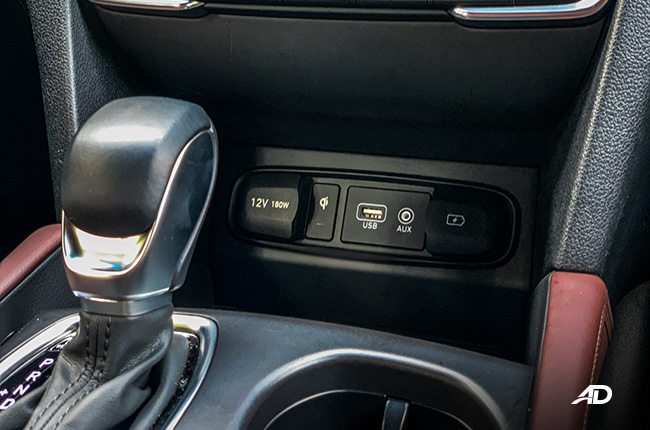 At its price point, I won’t blame you if you expect the Santa Fe to be loaded with features. Thankfully, it does deliver, covering almost everything that you’re looking for in a vehicle priced above the P2-million mark. From speed-sensing door locks to power tailgate with height adjuster, the midsize crossover has it – except for a sunroof, but that’s okay because really, do you really need one?

There are two notable tech features that you’ll find inside the Santa Fe. First, the Qi wireless charger works really well – but you’ll have to choose between that or using a USB cable for you to be able to use Apple CarPlay/Android Auto. Lastly, the Santa Fe’s 360-degree view camera has one of the clearest displays you’ll see on cars sold in the Philippines today - displayed on an aesthetically-pleasing 7-inch display. The Santa Fe comes standard with six airbags, ABS, stability control, and dynamic brake control as part of its passive safety features. It also has an around-view monitor, as well as front and rear parking sensors, to keep the vehicle safe from dings and damages.

Now, if you’re expecting high-tech radar-based safety features on the Philippine-spec Santa Fe because of the price point, well, you’ll be disappointed. Guess you can only do so much to keep an attainable price tag. The Santa Fe’s heft at 1,995 kilograms is pulled by a small yet powerful engine – a 2.2-Liter CRDi e-VGT diesel mill that produces 197 hp and 441 Nm of torque. These numbers were more than enough to give you a satisfying pull even when the car’s loaded up to the last row. The 8-speed automatic transmission wasn’t lazy, as well, as only a slight press on the accelerator was what it took for this huge vehicle to move forward. The slushbox shifted seamlessly, too.

Out in the open, the Santa Fe was composed and stable. It was also a cinch to maneuver on both wide and narrow thoroughfares, thanks to the assistance of the high-resolution 360-degree view monitor.

Although, the impeccable ride comfort comes with a drawback – handling. On winding roads, the Santa Fe handled just fine but with a tad improvement needed on steering feedback. At tight turns, however, the midsize crossover behaved poorly, so you would need to be careful in doing such maneuvers. Being a diesel, the Santa Fe naturally registered great fuel economy numbers, but I didn’t expect it to be this fuel-efficient.

An hour on frustrating city traffic, the Santa Fe clocked in 8.8 km/L at an average speed of 15 km/h, while faster provincial drives at around 60 km/h read back 15.4 km/L. Surprisingly, I was able to get 22.4 km/L at highway speeds with the cruise control locked in 90 km/h. Of all the good and bad traits that the Hyundai Santa Fe has, its price tag is its major downside, Coming in at P2,538,000 for the top-of-the-line variant, I can’t deny that Hyundai’s midsize crossover will hurt your wallet. It’s even more expensive than its direct FWD competitor from Mazda, and all of the ladder-frame SUVs that are in the market today.

But then again, the Santa Fe has its own market – car buyers who prefer comfort over off-road capability, refinement over ruggedness. It’s a four-wheeled cocoon that’s built to transport a family safely, spoilt with convenient features while being easy on fuel money. Its good traits precede the bad, and quite frankly, it’s hard to dismiss the car after having to drive (and ride) one. 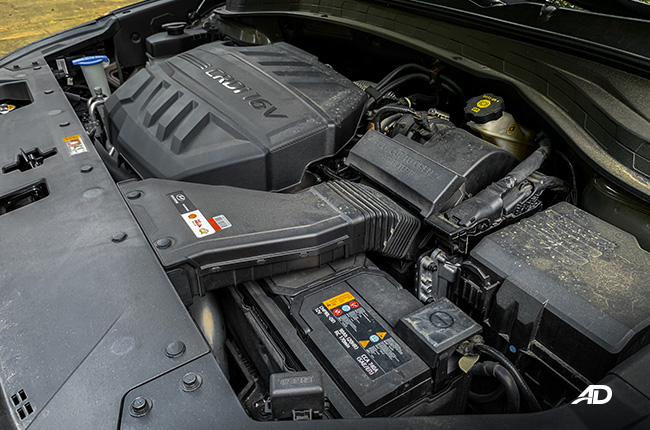