Southeast Asia is the land of the small MPV. In fact, this growing segment has created quite a rivalry between a few Japanese manufacturers, all introducing new and updated models of their best-selling seven-seaters in the market. It’s quite clear that Filipinos value practicality and space more than anything else when it comes to shopping for a family car, and the allure of having a vehicle that does it all certainly is tempting. Mitsubishi beat Toyota’s Rush to the new-MPV game early in the year with the Xpander, announcing their fresh contender for the small-MPV segment. Unfortunately, due to some regional supply issues, Mitsubishi Xpanders were allocated much later to dealerships and the Toyota Rush would steal the limelight for quite a while.

Performance
Engine Output (HP), Acceleration, Transmission, Handling 3.5/5
Design
Exterior & Interior Design, Quality, Fit and Finish, Ergonomics 3.5/5
Ride Comfort
Cabin Comfort, Suspension, NVH Insulation 4.5/5
Safety and Technology
Convenience Technologies, Active and Passive Safety Features 4.0/5
Value for Money
Amount of the vehicle you get for the price, Fuel Efficiency 4.0/5
What You Will Like
What You Won't Like
How We Do Our Reviews
Related: Toyota Rush vs Mitsubishi Xpander vs Honda BR-V - AutoDeal Comparo

I spent a few days with the Mitsubishi Xpander in top-of-the-line GLS Sport trim to see if this vehicle has what it takes to take on the standard bearers in its category, and, honestly, as someone who hasn’t had interest in this segment of the local market, I can safely say that the Xpander did surprise me – in a very good way. First of all, let’s talk about the design, more specifically, the front of the Xpander. In all honesty, it’s a love it or hate it affair to most people, and the triple lighting signatures that encompass the front Dynamic Shield design language are the most polarizing part. There are those slim LED parking lights right at the edges of the hood, almost like a brow, and no, those are not the headlights. The headlights are housed mid-bumper and far to the edges, with an integrated indicator. Then the small round fog lights are closer to the center of the bottom of the bumper. It’s a busy look, but it certainly does stand out in this segment, being the quirkiest. To be fair, it’s a look that will grow on you, I just wish those LED parking lights were also daytime running lights (DRL). 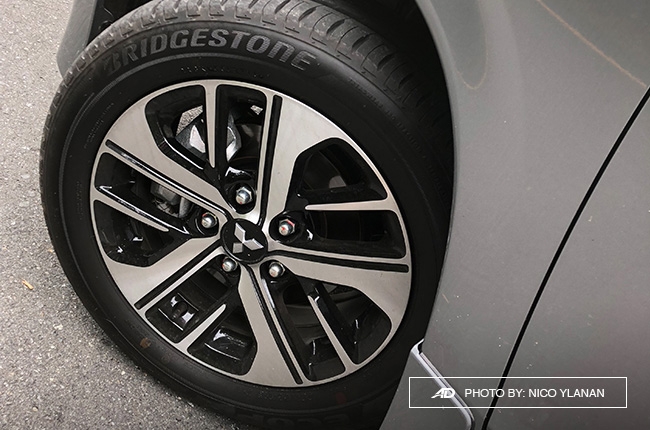 The side reveals broad shoulders over the wheels and a pretty neat and bold line running across the side up to the rear taillight. There’s even some design effort in the third-row windows, almost creating a floating, futuristic look. The 16-inch alloys lend to the rather fashion-forward look, too. The Xpander has some good angles, and the side profile is definitely one of them. From the rear, the Xpander looks good too, as the integrated spoiler and upswept LED taillights are neatly arranged. The rear character lines reflect the design of the front, and it works better here since it isn’t too cluttered. The reflectors are positioned to the near bottom of the bumper, with a centrally-located rear foglight and diffuser completing the look at the back. 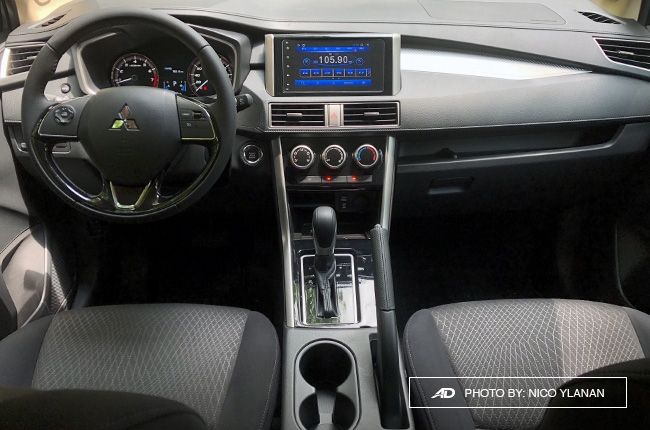 Step into the Xpander and you’ll find that the quirkiness ends at the exterior, as the Xpander features one of the more tastefully-designed and thought out interiors in its class. With smart key in-pocket, all it takes to unlock the Xpander is a press on the door handle button. Once you step inside, you’re greeted by fabric seats that offer great support and a wide range of adjustability. The steering adjustment is generous, and is tilting and telescoping, so you’ll find your ideal driving position with relative ease. The cabin is a mix of textured plastic and piano black accents located near the center stack. The plastics are of good quality and there’s even some neat stitching on parts of the dashboard, contributing to a well put together cabin. The rotary knobs for the air conditioning are solid and without fuss. 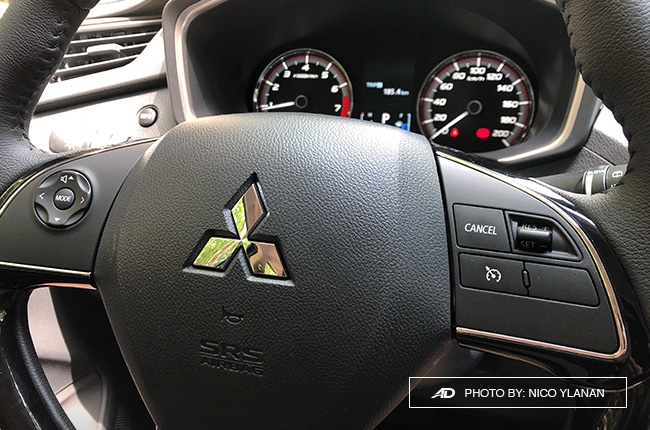 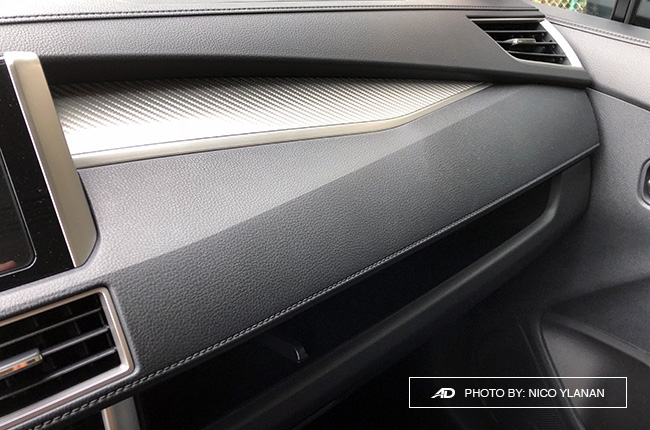 The seven-inch capacitive touchscreen is a decent head unit, and it even features navigation and the usual Bluetooth, aux inputs, and phone mirroring. The reverse camera also feeds its video through the infotainment system. Pairing is easy and the sound is played through a six-speaker sound system.Behind the three-spoke, leather-wrapped steering wheel is a pretty high dashboard. The twin dials for RPMs and vehicle speed are clearly indicated, and there’s even a small multi-function display in between that can show things like fuel range, eco-driving indicators, various trip functions, and the usual gear and fuel levels. You’ve also got cruise control and steering wheel mounted controls for convenience. Safety is courtesy of two airbags, ABS with electronic brakeforce distribution (EBD), hill start assist, traction control, and active stability control. 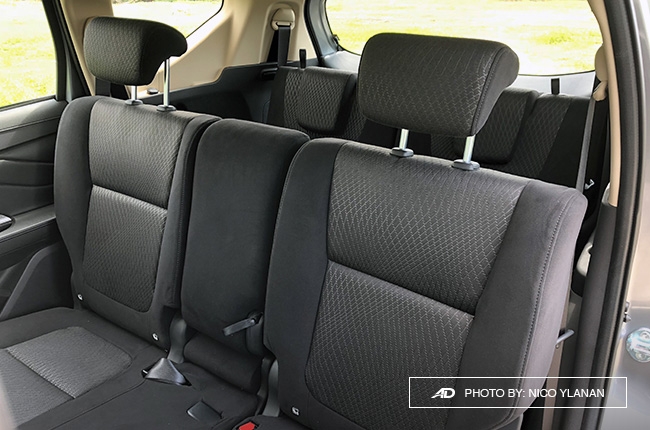 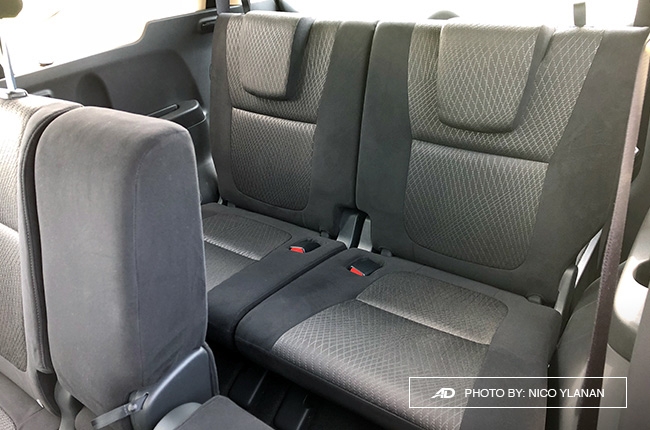 The Xpander also features a good amount of storage spaces for items like phones, wallets, and coins. Cupholders are sprinkled throughout the cabin and there are a few hidden compartments under the 2nd-row seats and trunk for even more storage options. The second-row seat can be slid forward for generous space to enter the third row, and the various ISOFIX mounting points allow easy installation of car seats. Second-row space is generous and easily fits three adults, while the third row can be tight for anyone close to six feet in height. What’s neat is that even the third row gets a set of cupholders and an armrest. Fold the rear seats back for more storage space, and you have a cargo area that’s almost completely flat, creating opportunities for you to be creative with how you’ll carry some cargo. The only issue I had with the interior is the omission of a center armrest for the driver and front passenger, which should honestly be a standard thing in vehicles nowadays.

The Xpander is built atop a car platform and utilizes a McPherson strut for the front and a torsion beam for the rear. It is front wheel drive and is powered by a 1.5L gasoline engine that generates 105 hp and 141 Nm of torque, and, being the GLS Sport, is mated to a four-speed automatic transmission. Because of the car platform, ride quality is certainly good, plus it handles pretty well, too, making it one of, if not the best, in its class when it comes to refinement. The steering is electronically assisted and is nicely weighted, making the Xpander easy to drive and maneuver at any speed. Out on the open road and highways, the Xpander feels stable and true, with the engine relatively quiet even with the four-speed automatic. It takes a slight bit of prodding to safely overtake other vehicles on a two-lane road, but it gets to speed relatively quickly. When it does downshift, it isn’t jarring or upsetting in any way. Overall, it’s a car-based small MPV that certainly drives like the former, but offers the versatility of the latter. 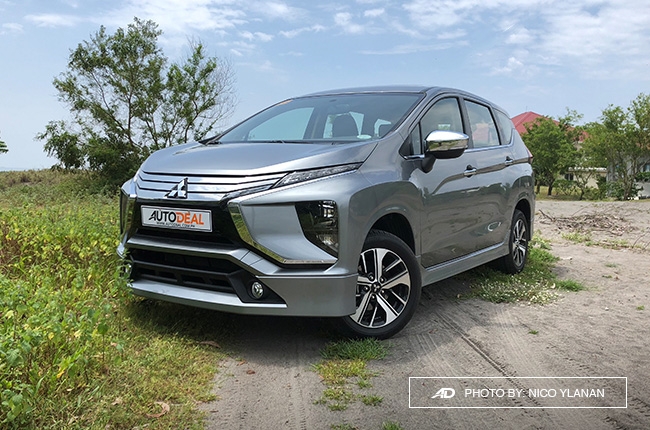 In the city, the Xpander performs admirably, with good vision from the big windows to spot other vehicles and pedestrians, and returning 9-10 km/L in heavy traffic. On the highway, our jaunts were able to return around 16-17 km/L with an average speed of 90 km/h, which is decent.

While Mitsubishi may be late to the party with the Xpander, the new platform offers up one of the best driving small MPVs in the market to date, combining technology, safety, and comfort in an interesting looking vehicle that deserves more attention. Priced at P1,130,000, the Mitsubishi Xpander creates an extremely tempting value proposition, as it is competitively priced among its competitors. If you want the most refined seven-seater small MPV on the market right now, you’re looking at it. It’s the one I would buy. Just be prepared for the long reservation lines before you drive one home. 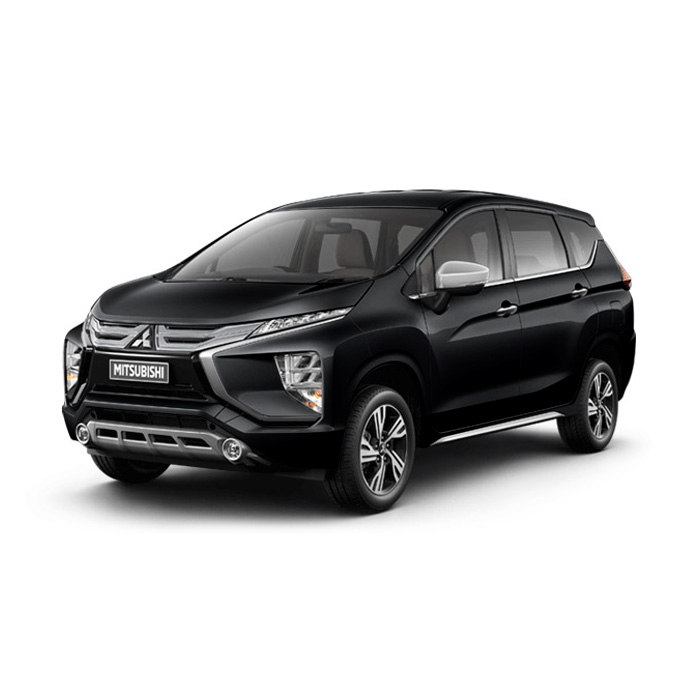 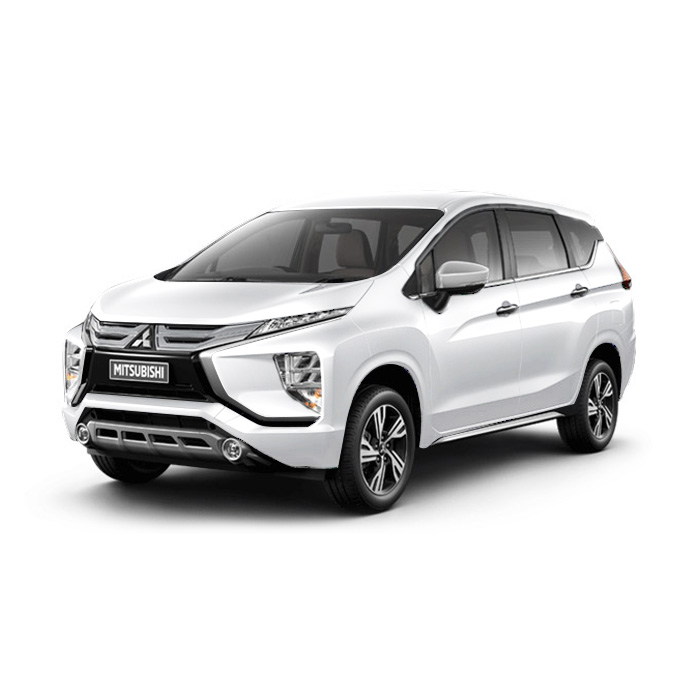 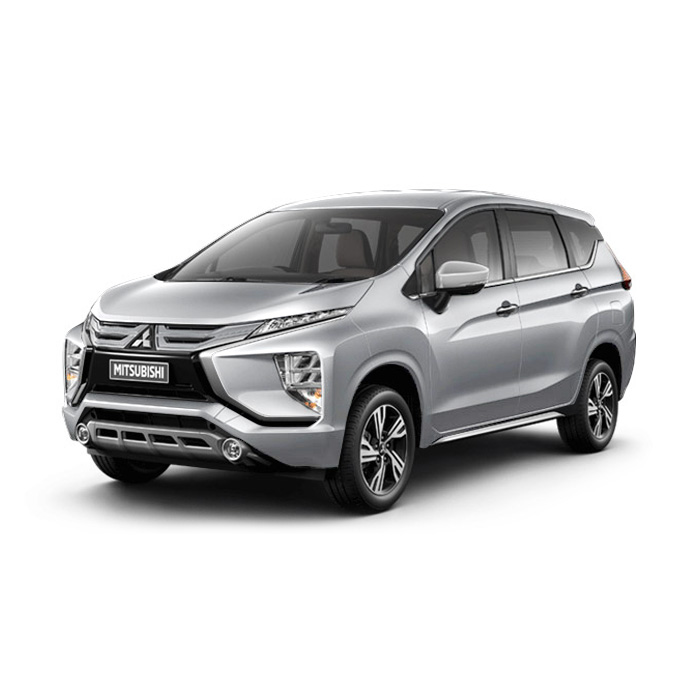 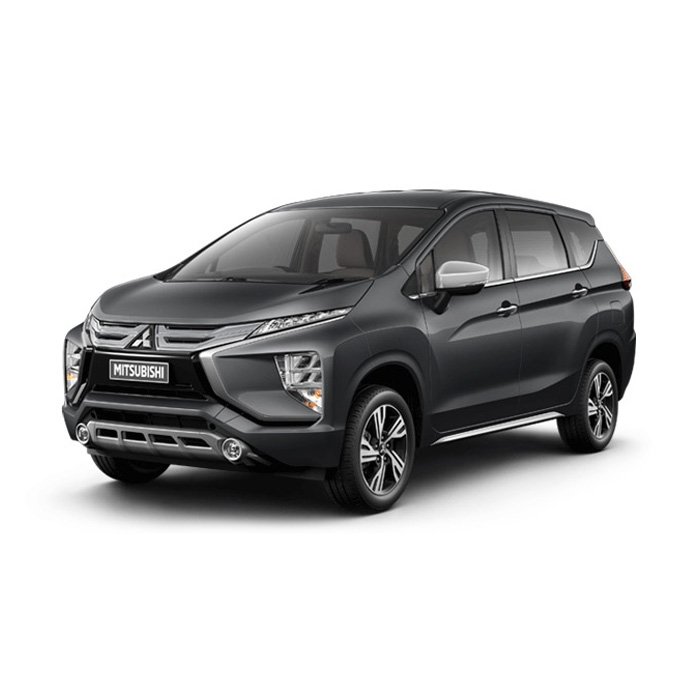 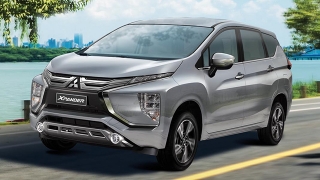