The BT-50 was given an update last April, to the surprise of all who attended the 2017 Manila International Auto Show. It doesn’t have the ‘KODO: Soul of Motion’ design code of the other models in Mazda’s lineup, but it still looks sleek and curvy as all Mazdas do.

Under the hood is a 3.2L Diesel engine that puts out 200 horsepower and 470 Nm of torque. Plenty of power to pull out in case you want that extra ‘oomph’ in your drive.

With a stylish exterior, functional and simple interior, and a generous amount of power under the hood, the 2017 Mazda BT-50 3.2 4x4 AT makes for a formidable case in the pickup segment. 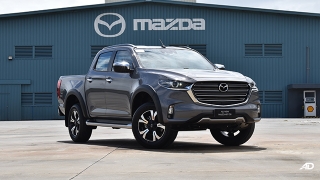 Powerful & Practical - the Mazda BT-50 is one of the most capable and powerful pick-up trucks in its segment.