It’s here, it’s finally here, the 2020 Toyota GR Supra makes landfall in the Philippines thanks to Toyota Motor Philippines (TMP). Long awaited, sleek, coveted, and hyped up to the nth power, the sports car is on the radar of enthusiasts who wish to own, drive, ride, or even catch a glimpse of the latest in a line of legendary cars from Toyota.

We take you on an up close and personal trip inside and out of the Toyota Supra. Several color variants were launched, but the color that we primarily focused on is the unit in its Prominence Red color, a shade we have been dying to see ever since teaser images were shown to the media.

Every curve, corner, and edge is showcased as the lights of the event bounce off the top coat. Multi LED headlights mold perfectly in to the front facia with grilles and cut outs in almost every square centimeter of space for optimal airflow and cooling to be unlocked by tuners. The forged wheels house a set of four-piston brakes that keep this car’s acceleration in check.

Powering the car is an inline six-cylinder that is advertised to produce 335 hp. A rear wheel drive layout and a 50:50 weight distribution will appeal to purists looking for a sports car that not only goes like heck, but stops on a dime and turns the corner well. Keeping the wheels on the ground are a set of adaptive Macpherson front, and multi-link rear suspension set straight from the factory.

Stepping into the interior reveals some foreign influence with straightforward lines, purpose driven controls, and ergonomics that help ensure driver control. Somewhat cramped, drivers and passengers will know that this is a car that is engineered to perform, trading cabin space for even more chassis rigidity. 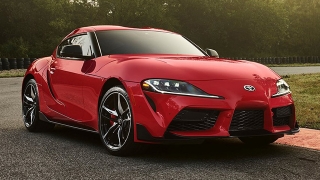 The Return of an Icon – the fifth-generation Toyota G Supra is the marque's answer to the undying thirst of fans for a sweet comeback.