Honda Cars Philippines, Inc. is probably planning a massive year-end party where all their cars are updated to the newest version, or maybe not. What we do know is that for their latest reveal, they brought in the all-new Honda CR-V that can accommodate 7-people (except for the base variant) and is now powered by a diesel engine (again, except for the base model).

In front are a new set of sleek headlights, adorned by a muscular bumper. The rear received a new set of taillights that looked like a merge between the BR-V’s and the Jazz’s. Inside, the diesel variants received a new, push-button electronic gear selector, while the gas-powered base model has the usual gear shifter.

There’s so much more to view with the 5th generation CR-V so stop reading and start watching. Or did you watch it first? Then watch it again! 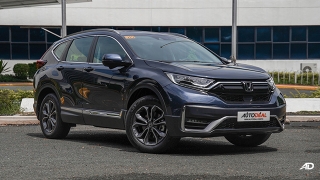 Comfortable & Versatile - the Honda CR-V is easy to drive and provides buckets of interior space and storage capacity.