With its accessible price, good loadout of features, and surprising stability at speed, the Kia Soluto is one Kia that’s been one of our recommendations ever since it won our comparo between some of its rivals.

It can make for a very good first car if you’re looking for one for yourself or for another, or it can even serve as a nice backup if your main squeeze needs to rest. So let’s jump in and look at all the surprises that the Kia Soluto may have up its sleeve that make it a dependable partner. 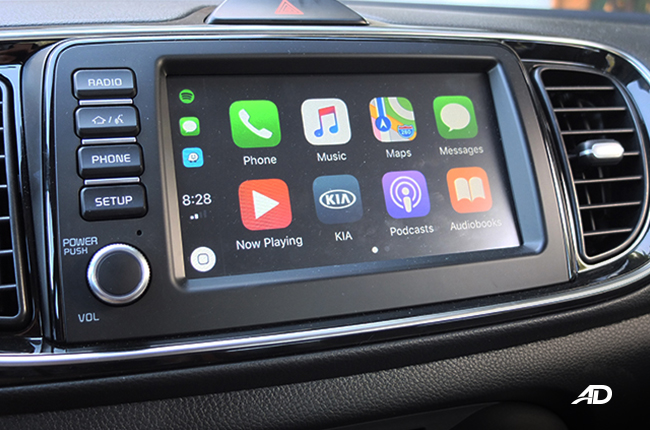 It is very rare that you will find a car that has Apple CarPlay, Android Auto, a speaker for each door, and a pair of tweeters. Kia Philippines has generously outfitted its entry-level sedan with some rather high-end audio equipment. The head unit is very capable, and it seamlessly pairs with either your Apple or Android smartphone, allowing you to view your favorite navigation software on-screen without having to take your hands off the steering wheel. Once the music starts playing, you get a nice balance high tones and mid-tones thanks to that woofer and tweeter speaker setup – not bad for a car that costs P755,000 for a top fo the line model. The Soluto comes with a 1.4-liter naturally-aspirated engine that produces around 94 hp and 132 Nm of torque. Now, it’s no 1.3-liter as found in smaller cars, nor is it a 1.5-liter which is found in slightly larger cars. It’s a middle ground, offering enough grunt to get you up to speed on the highway while returning great fuel economy figures in the city. In our testing, the Soluto averaged over 20 km/L on the highway and at least 12 km/L in the city – which is impressive. Now it has to be said, that even while traversing the highway, wind, and road noise was kept to a minimum in the Soluto. It’s one of the better performers out in this aspect, and it indicates that it is a very refined car. Now, it’s no European exotic, but Kia has been making a name for itself recently in the world of car design. The Soluto is just one of the examples that mark how far the brand has come in recent years – thanks to several veteran designers in Kia’s roster. It doesn’t scream, it doesn’t whisper, instead, the design speaks at a normal and respectful tone to those who look at it.

The warranty and aftersales support For many first-time car buyers, one of the biggest considerations that you have to make is with regard to the services that come with your purchase of a car. Thankfully, Kia Philippines offers the Soluto with a 5-year or 100,000 km warranty that will take care of you for a long time. If you find yourself in a predicament, Kia also offers a 24/7 emergency roadside assistance service – who says you can’t buy peace of mind?