The auto industry in the Philippines is no Game of Thrones, but it’s (very) competitive nonetheless. Based on recent reports that revealed the total sales achieved by the motoring brands last year, the industry remains to be hopeful for an auspicious kingdom that promises long-term riches and great honor despite the apprehensions and speculations pertaining to the implementation of the country’s new excise tax program.

AutoDeal has tracked the growth of the Philippine car industry and its top players in the past five years, and these graphic illustrations present the remarkable changes that happened within. Japan’s largest car manufacturer, Toyota, wears the crown steadily yet providing no excuse to slow down its acceleration. From selling 75,161 units in 2013 to achieving 182,657 passenger and commercial vehicles sold in 2017, Toyota widens its gap against the local industry’s second leader, Mitsubishi, with a difference of 115,656 units sold in 2017 — an almost 250% gap increase in the five-year record sales. The market leadership may appear quite challenging to shake down—as the rulers continue to be strategic in retaining the seats—but it won’t be surprising to take notice of the improving performance of the local auto industry’s main contenders: Hyundai and Ford. Based on the 2017 figures, the South Korean car company takes the third seat, with a margin of 1,055 units against the American automaker.

Within half of a decade, these two have been competing tightly that in 2015, Ford’s sales of 25,372 units overtook Hyundai’s sales of 22,058 units; making Ford that year’s third placer. However, with a matter of seven sold units, Hyundai took back its third seat in 2016, and retained it with 1,055 gap units in 2017.

Hyundai ended with 11.82% growth last year, but in spite of which, its gap between Mitsubishi increased by 57% in the past five years. Meanwhile, the gap between Mitsubishi and Ford does not enjoy the same massive difference. In 2013, the Japanese and American auto companies had a staggering 29,890 gap units, but extended in 2017 by only 15%. The most exciting (and most significant) changes within the Philippine auto industry are surprisingly happening in the car companies that comprise the market’s mid-pack. These aggressive challengers are Honda, Isuzu, and Nissan that took last year’s fifth, sixth and seventh seats, respectively.

Although Isuzu was conveniently steering through as one of the industry’s top five from years 2014 to 2016, Honda stepped on its accelerator fast enough to overtake and get back its seat with 1,672 gap units in 2017. The striking improvement in Honda’s sales allows it to shrink its gap, to less than 5,000 units, against the industry’s third, Hyundai.

Nissan, another Japanese automaker, is definitely impressive in speeding up its growth. Five years ago, with less than 2,000 units sold, Nissan was not even part of the local motoring market’s top 10. After gearing up, it ranked ninth in 2014, and seventh in 2015 (until the present), and more than 120% increase in its total sales within the five-year period. More interestingly, Nissan has managed to lessen the gap with its closest rival, Isuzu, by 50% last year. Also, in 2017, Nissan marks a huge decrease in the gap units with third placer Hyundai from more than 20,137 units in 2013 to 12,683 in 2017. It is essential to note that the erratic movements in the local auto industry are observed among these break-out brands. In 2013 and 2014, Kia placed seventh, but it dropped to the ninth rank in 2015 and 2016. However, last year, the South Korean automaker steps out of the top 10 with 29% reduction in sales, following a 27% decrease in 2016.

Mazda has made its way back to the list of top 10 car companies in the Philippines by generating 702 gap units with its closest competitor, Chevrolet, last year. With total sales of 5,247 units in 2017, this Japanese car company has doubled its total units sold in the country since the year 2013 (with 2,406 sold units). 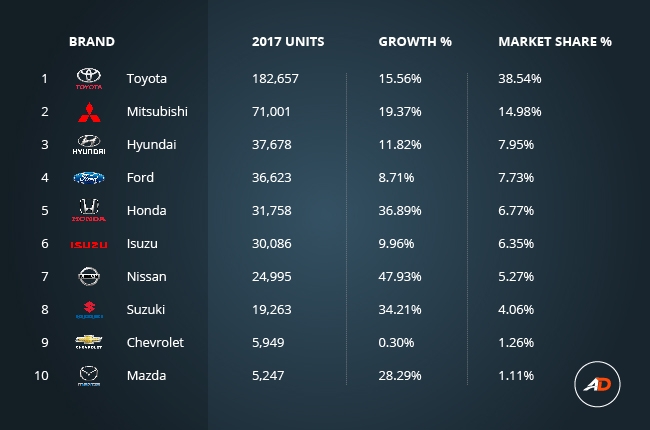 Looking ahead of 2018, it is no doubt that in this auto kingdom, the tough fighters, Toyota and Mitsubishi, will most likely maintain its leadership. However, all eyes are on the contenders Hyundai and Ford in its aggressive play for the third and fourth spots, while mid-packers Honda, Nissan, and Suzuki compete its way to the top five.

Given Nissan’s 47.93% growth rate and Honda’s 36.89% growth rate (and the onset of their new cars), it will be very interesting to observe how these two will fare this year. Daring to be bold this year, Nissan is already buzzing with early introduction of its refreshed models, as well as the entry of its legendary motorsports car, GT-R NISMO.

And, with the introduction of its super guapo Picanto GT-Line, will Kia make it again to the top 10? Or, will the new excise tax program influence its dropping sales since 2016?

Apprehensions and speculations will remain, well, until the end-of-year figures are seen. It’s going to be a tough ride for the players this 2018, but one thing is sure that—although the Philippine auto industry is no Game of Thrones, it’s (very) competitive nonetheless—not one seems to be stopping; all are driving to the finish line.