Toyota Motor Philippines, as many already know, is one of the most popular brands in the country. It has a wide selection of vehicles to choose from starting with the affordable Toyota Wigo, the dependable Toyota Vios, all the way to bigger options such as the Toyota Innova, Toyota Fortuner, and the Toyota Hilux.  With the brand being so popular and being able to sell so many vehicles, this begs the question, what do owners think about their vehicles?

On the AutoDeal website, we have a feature on our car guides that allow users to review their automobiles. Only verified buyers get to use this feature so even browsing through can net some pretty interesting anecdotes depending on the vehicle that you’re looking at.

With that in mind, we have compiled a handful of reviews from satisfied customers of Kia products in the Philippines. Take note that there’s more to read by visiting our car guides and browsing the content on the page. Some of these reviews were written after six months of ownership while the others were the owner’s initial thoughts on the vehicle once they got them straight from the dealership. That said on to the owner reviews. Starting off with the brand’s most affordable vehicle in the form of the Toyota Wigo. This unit was bought by Mr. Revo Guison and he opted to get the TRD S version. According to his initial impressions of the vehicle, he found it to be affordable and to be feature-packed. He even cited that some of the features present in the Wigo are found in many higher-end vehicles giving it a great value for money proposition. Mr. Guison was very much satisfied with the Wigo and even cites that as a Toyota you can never go wrong with it.

Next up is an owner review on the Toyota Hilux. The popular pickup truck has gotten a solid following over the past few years thanks to its ruggedness and its dependability. Mr. Rosito Mariano also thinks the same as he found the pickup truck to be almost perfect but just needed a more plush interior.

Rounding off the first impressions list is Ms. Karen Bedruz who recently bought a Toyota Vios in its XLE trim. She could the sedan to be very comfortable and a nice daily driver as well. It's no wonder that Toyota sells many of these vehicles as the Japanese automaker seems to have it the right spot when it comes to its variant selection for the Vios. Now on to the six months of ownership reviews from Toyota owners. For this, we will start off with a Vios owner who has given the sedan a solid five-star rating all around. They even state that “This is my first car and it has been life-changing.”  Mr. Tolentino, the owner of the Vios even states that he has had no issues with the car despite it initially being hungry for gas but improved over time. He even states that the 1.3-liter engine delivers more than enough power for the sedan and that he loved the Apple CarPlay and Android Auto functionality of the head unit. 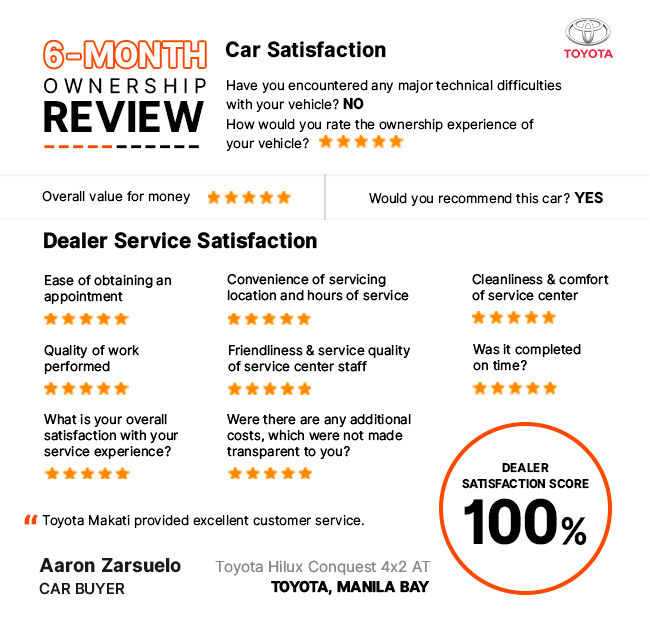 Next, we have another review but this time for a Toyota Hilux in its 2.4-liter Conquest trim. The owner Mr. Zarsuelo found the pickup truck to be quite satisfactory giving it a five-star rating all around. He was also satisfied with the dealership where he got the vehicle from as Toyota Makati provided him with excellent customer service. Finally, we have a review of a Toyota Fortuner in its 2.8-liter LTD trim. The owner Mr. Ko was generally satisfied with the SUV, however, he only gave the vehicle a four out of five stars for its overall value for money rating. He also gave the same score for the friendliness and service quality of the service center staff and for the quality of work performed on the vehicle. His only comment for the Fortuner was that he found the JBL subwoofer to be kind of disappointing but overall he gave the SUV high marks in other areas.