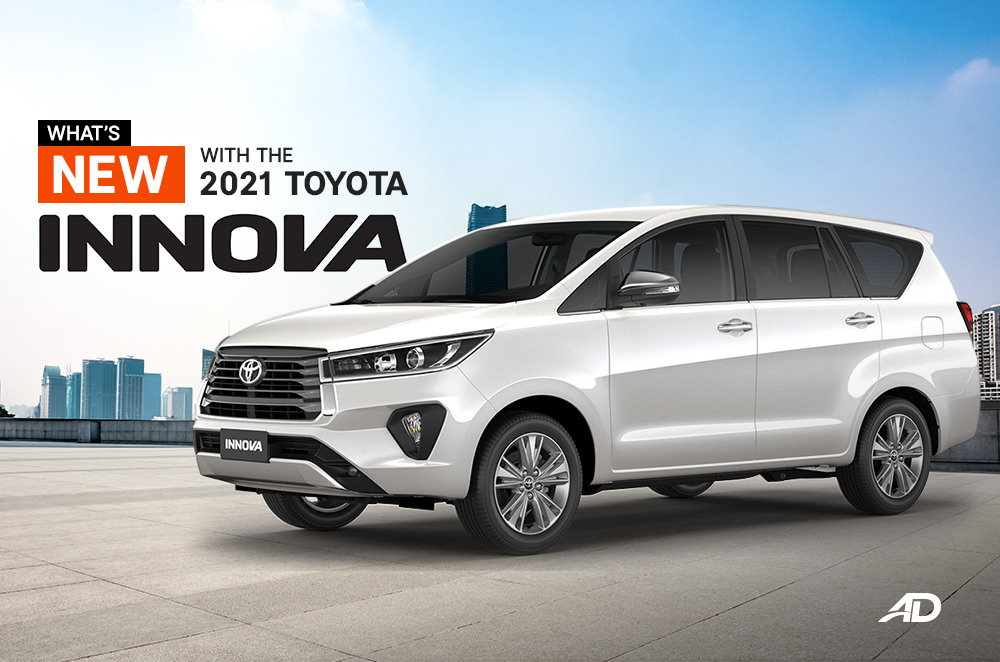 Toyota has recently updated the Innova, the Japanese brand’s most successful MPV in the Philippines. Even if it is the newest model, a lot of what made the Innova successful remain, like the IMV platform which is shared with the Hilux and the Fortuner. Because of the strength of the platform, the Innova remains as durable and reliable as ever, even retaining the old 2.8-liter engine configuration.

So while the bones of the Innova remain the same, what’s changed? Let’s go over some of the more notable additions for the 2021 model. Note that most of the features we’ll be going through are standard for the V grade variants only. 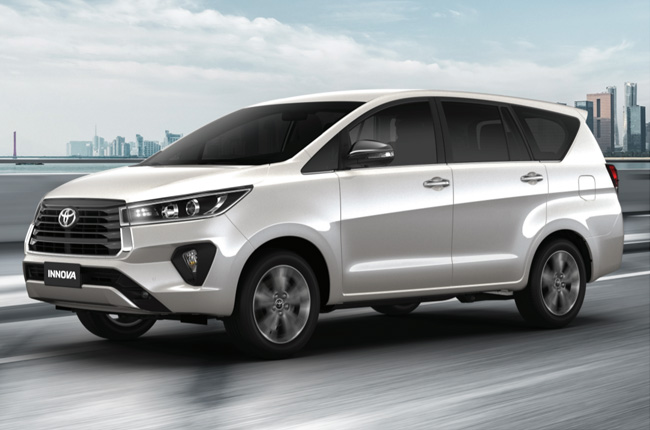 A common sight on Philippine roads, the Innova’s front face is familiar to many Filipinos, but it’s updated for 2021 with some notable features that make it a modern model. Still retained are the LED headlights that not only look good but perform great as well. The main beam is LED, but the high beam is halogen. The new model now comes equipped with new LED daytime running lights. Below the main beams, we see a set of LED foglamps as well as a new grill that sits between the two lighting arrays. The front bumper is also revised and now features a black design element that highlights the lower portion of the front, making it look a tad sportier.

Overall, the new face is a breath of fresh air from Toyota, however, it is still a very familiar look. It’s a marked improvement over the prior iteration. Augmenting the new look is a new set of wheels that add an extra spoke to the design. The wheels grew an extra inch, now coming in at 17-inches in diameter.

A familiar interior with a new twist The top-of-the-line Innova back then had a light-colored interior. While it looked good new, over time, it would get easily dirty, and the stains would have been a nightmare to remove. The top-of-the-line V variants now come with darker upholstery. Dubbed Noble Brown, the shade is reminiscent of dark chocolate. Regardless of what it reminds you of, it won’t stain as easily, and it will retain its color better over time compared to the light-colored interiors of the past. Toyota has been able to equip the Innova with quite a bit of tech. Coming from the prior year model, you only got the basics, like a touchscreen infotainment system and parking sensors.

Ambient lighting was once a feature only reserved for the V variants of the past. It’s a different story now, however, since the mid-range G grades of the Innova now come standard with ambient lights, so more people can experience the beauty of ambient lighting for not that high of a price.

Gone is the mildly capable infotainment system that was found in the Innova of the past, and in its place, we find a fully capable and modern touch screen system with Apple CarPlay and Android Auto. This feature is standard for the V, G, and E variant grades of the MPV, and is a welcome addition to the lineup. You won’t need to buy a phone mount for your car anymore because you can see a driving-friendly interface in the middle of your dashboard. It also doubles as your reverse camera for the V and G variant families, and, helping you get in and out of tight spots, you get front and rear parking sonars for the V and G grades as well.

While there aren’t a lot of new additions to the Innova, it’s still mostly the same but better. The new face looks quite nice. It’s not overly-styled or radically different, but if you look closely, it is noticeable enough for you to say that it is indeed new. At least for all top-of-the-line models in the Toyota lineup, you get a backup camera for all models as well as Android Auto and Apple Carplay for many nameplates. The interior is the same, but it has a different-colored interior that hides stains better, plus you now get ambient lighting in the mid-tier variants.

All in all, it’s a bit of a minor update, but it’s all well and good. The Innova still retains all of its best qualities, and being locally manufactured is also one of the best qualities it still can be proud of to this day.