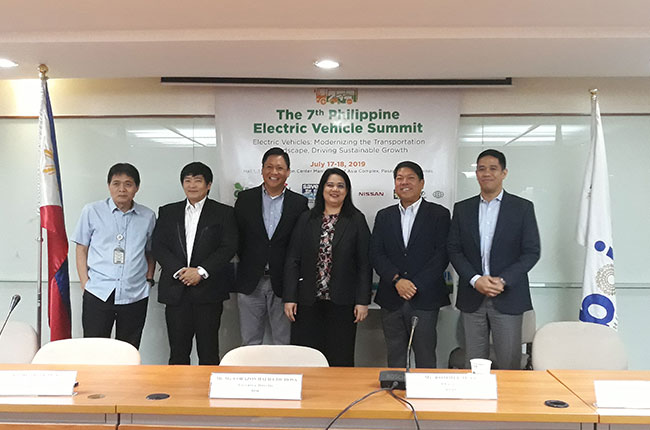 Edmund Araga, EVAP’s president, observed that the electric vehicle industry in the Philippines is on a roll with news of new EVs making their way to the country soon.

Infrastructure and government support to sustain the growth of the EV industry are now being set up. The 3,000 Bemac eTrikes of the Department of Energy (DOE) now being deployed nationwide are becoming more visible in various LGUs.
Edmund Araga
President, EVAP

The president also reveals that more and more e-jeeps are being deployed as part of the government’s Public Utility Vehicle Modernization Program (PUVMP). Around 200,000 public utility jeepneys will be replaced with either diesel or electric alternatives in the next six years.

The upcoming summit will be home to several well-known brands in the Philippines, Nissan, Mitsubishi, and Hyundai. All manufacturers have showcased their prowess in building electric vehicles. One of them has already announced the coming of one of their best selling models in the near future.

Related: The 2020 Hyundai Kona Electric is an EV you can buy soon

All in all, we expect about 15 vehicles to be exhibited and over a thousand visitors to visit the EV Summit daily. We will have on display the latest electric tricycles, cars, SUVs and jeepneys participating in the PUVMP. You will even have the opportunity to test drive some of these EVs at the grounds near SMX. The best news is that if you visit the EV Summit, you might bring home an eTrike that will be the major prize in a raffle we will be conducting.
Edmund Araga
President, EVAP

Moves have also been made to create batteries for these vehicles. A partnership between EVAP and the Philippine Nickel Industries Association seek to explore the possibility of locally manufacturing nickel metal hydride and lithium-ion batteries for use in EVs. In conjunction with the Bureau of Philippine Standards, a set of standards is being developed to cover parts, components, testing parameters, and procedures, as well as safety features.

The theme for the Electric Vehicle Summit 2019 is “Modernizing the Transport Landscape: Driving Sustainable Growth”. This is not just limited to introducing EVs to the market because keeping these zero-emission cars on the road is needed to have these vehicles fully-adopted into the Filipino motoring culture.

We invite EV enthusiasts and the general public to come and see what the Philippine Electric Vehicle Summit 2019 has to offer -- the future of automotive technology. We are sure that our EV displays and talks from various EV experts will be both educational and enlightening for all involved.
Edmund Araga
President, EVAP

Entry into the summit will be open to the public, and registration can be done as early as now on their website