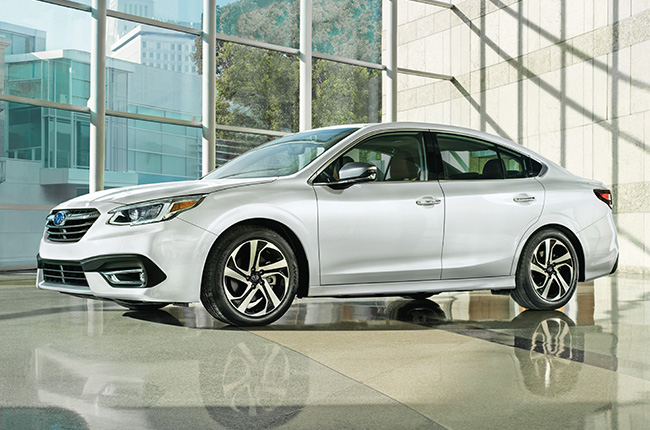 The Subaru Legacy has come a long way since the Japanese marque dropped the turbocharged version in its sixth-generation model. The legendary flagship midsize sedan has become sleeker and feistier than ever, bearing the signature hawkeye headlamps and hexagonal trim while sporting the Outback’s 3.6-liter flat-six Boxer engine.

Today, however, Subaru unveiled the all-new 2020 Subaru Legacy at the Chicago Auto Show. The seventh-generation model gets to engine choices in the United States – one of them is Subie’s turbocharged flat-four power plant. Available in several trims primarily classified as XT and non-XT trims, buyers of the 2020 Legacy could choose between the 2.5-liter naturally-aspirated flat-four engine in the non-XT variants or the force-inducted 2.4-liter flat-four in the XT trims. The former produces 182 hp and 239 Nm of torque, while the turbocharged version churns out a healthy 260 hp and 376 Nm torque. Sadly, the flat-six engine is out of the picture, at least for now. Available transmission remains to be Subaru’s Lineartronic CVT, while standard among all variants is the brand’s signature Symmetrical All-Wheel Drive with Active Torque Vectoring.

Aside from the new engine choice, the 2020 Legacy now sits on the Subaru Global Platform, following what the Impreza, XV, and the Forester have commenced. It promises an increase in the stiffness of the body, as well as a lower center of gravity and quieter cabin than before. Speaking of the cabin, the all-new Legacy gets more posh materials inside, including tan leather trims for the top variants. What’s standing out, however, is the vertically-positioned 11.6-inch display that will be available in all but the base variants. It combines the multi-information display and the infotainments system, which is a huge departure to the current Subaru dashboard layout that has three screens.

As with safety, the 2020 Legacy will, of course, have Subaru’s EyeSight Driver Assist systems to align itself with the rest of the automaker’s new cars. In addition to the city-usable adaptive cruise control, the EyeSight system will also have Lane Centering function and Driver Focus Distraction Mitigation System.

There are no words yet as to when 2020 Subaru Legacy will hit U.S. showrooms, as well as its global availability. Currently, the outgoing Legacy in the Philippines is available for an indent order basis only. Will this new-generation model bring the flagship sedan back to Subaru Philippines’ official lineup?