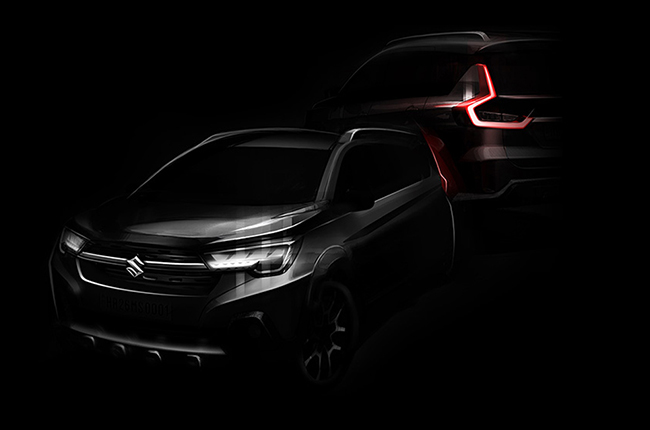 After the spy shots circulated online last month, Suzuki released official images of the upcoming XL6 – a model set to compete with the likes of the B-RV, Rush, and Xpander.

Like its competitors, the Suzuki XL6 is based from its MPV sibling, the Ertiga. Basically, the XL6 is a raised version of the popular MPV, mainly for those who seek extra ground clearance which is beneficial during unpredictable conditions or even tricky obstacles. In terms of aesthetic treatment, the Suzuki XL6 features a different yet bolder fascia from its Ertiga sibling as complemented by its large headlights and a hexagonal grille which sports a rather distinctive design. It is then finished up with a chrome mustache which extends through the headlights.

The rear, on the other hand, is reminiscent of those of the Ertiga’s. What’s not found on the Ertiga are a pair of roof rails which does add up that sporty character. Inside, the Suzuki XL6 has an all black interior which surprisingly comes with a 6-seater configuration, translating a typical 3-seater bench into a 2-seater captain seats, a segment’s first. You do get the same dashboard layout from the Ertiga, although some finishes and fixtures seem different such as the AC controls and the addition of silver trims along with a new faux wood design.

In terms of powertrain options, it is expected that the Suzuki XL6 will share the familiar 1.5-liter K15B engine found on the Ertiga along with the same pairing of transmission which could either be a 5-speed manual or 4-speed automatic. Notably, a 1.5-liter turbo-diesel version might become available on India.

The Suzuki XL6 is set to debut in India soon. With that in mind, stay tuned for more updates and let’s keep our fingers crossed hoping that this model reaches our shores.