Suzuki Philippines unveiled something interesting at the 8th Philippine International Motor Show. The Japanese automaker has kept its word by bringing a hybrid vehicle into the country. We have long since speculated that this could be the hybrid version of the Suzuki Ertiga and true enough this is what Suzuki Philippines did unveil at the motor show.

The Suzuki Ertiga Hybrid serves as the Japanese automaker’s premier electrified model in the country. It originally made its debut in Indonesia and now has made its way into the Philippine market. On the outside, the Suzuki Ertiga looks similar to its gasoline engine counterparts with a few additions such as a body kit to make it sportier. It comes with a new front grille, an updated tailgate garnish, and a new set of 15-inch dual-tone alloy wheels. It also comes with automatic projector headlights, and auto-folding side mirrors with integrated LED turn signals. On the inside, the hybrid version of the Ertiga remains largely the same as its internal combustion engine counterparts. It does, however, get a restyled instrument cluster and multi-info display, new fabric seats and cabin trim, and a leather-wrapped steering wheel. It also gets a large infotainment system at the center as well harking back to the GLX variant of the MPV which is no longer available. 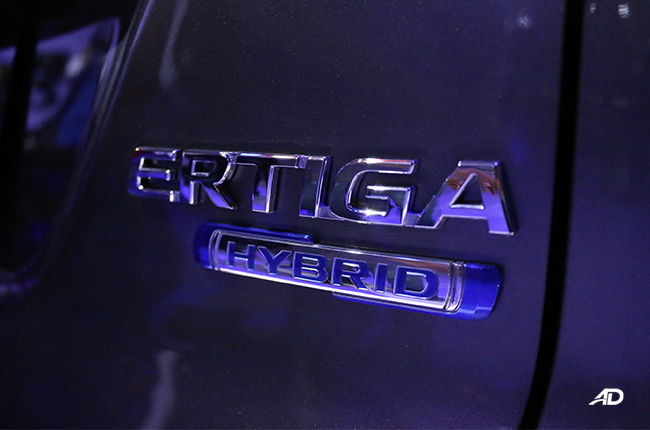 The Suzuki Ertiga still comes with a 1.5-liter K15B engine, however, it now benefits from the brand’s new mild-hybrid system dubbed the Smart Hybrid Technology. This means that the MPV now comes with an integrated starter generator and a lithium-ion battery pack. With this new technology, the Ertiga also now makes 104hp and 138 Nm of torque. While it isn’t a large improvement over its gasoline counterparts, what it does is improve the MPV’s fuel-saving characteristics.

Aside from the hybrid drivetrain, the Ertiga hybrid also gets automatic start/stop while idling, regenerative braking that recharges the lithium-ion batteries, as well as torque assist that delivers faster acceleration while under load. Similar to its gasoline counterpart, the Ertiga hybrid still sends power to the front wheels via a 4-speed automatic transmission.

While this may seem like a tempting proposition, hold your horses as Suzuki Philippines has yet to release the pricing and the variants of the 2023 Suzuki Ertiga Hybrid. The Japanese automaker has announced that it will release them at a later date, don’t worry as we will update you once they release this information.