The all-new 2023 Suzuki Swift is reportedly set to make its global debut by December 2022. Following that, the new hatchback will be made available for the Indian market first next year, with other markets getting the model later in 2023.

It’s no secret that Suzuki has begun testing the next-generation Swift in Europe. Spy shots from weeks past have given us our very first look at the new model, and it’s clear there are substantial updates here. 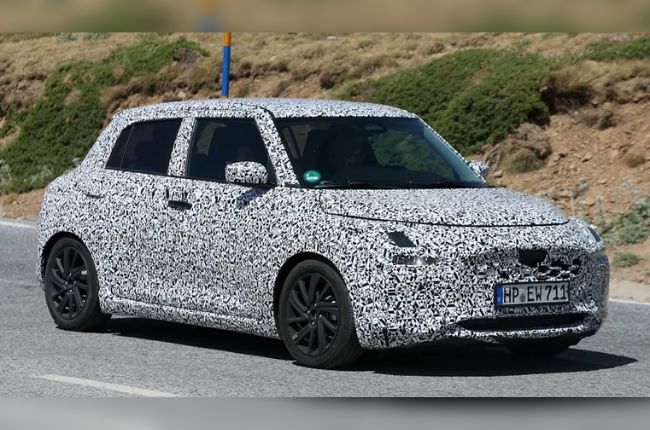 While the Swift’s overall silhouette remains for its new generation, it will also feature new design elements to bring it forward into the modern era. For instance, Suzuki has overhauled the hatchback’s front fascia, giving it a new grille design, a clamshell hood, and sleeker, rounded LED headlights.

The bumper has also been updated with an air intake that sits lower and wider. It now has space for C-shaped air splitters and new fog lamp clusters. Elsewhere on the vehicle, there are new body panels and two-tone alloy wheels with larger size options.

As opposed to the outgoing model which had its door handles mounted on the C-pillar, the new model features conventional handles positioned directly on the doors. Other design choices include faux air vents on the wheel arches, blacked-out pillars, and an integrated spoiler. The all-new Suzuki Swift rides on an updated HEARTECT platform—the same architecture underpinning the S-Presso and new Celerio. Other than exterior changes, the new Swift will also feature a new cabin with higher-quality plastics. It will also likely pack Suzuki’s new SmartPlayPro+ touchscreen infotainment system, although the exact size of the unit is yet to be determined. This new system could come standard with wireless Apple CarPlay and Android Auto as well as Suzuki Connect technology.

Power-wise, the 2023 Suzuki Swift will reportedly be available with a 1.2-liter NA gasoline engine and a 1.2-liter mild hybrid powertrain. Both manual and Auto Gear Shift (AGS) transmission options are expected for the new Swift. Down the line, a new Swift Sport with a more powerful 1.4-liter BoosterJet turbo engine could become available.

The Philippine market will almost certainly get the all-new 2023 Suzuki Swift. The only question is when that happens. With the vehicle’s global debut reportedly set before the end of the year, it’s not that big a leap to think the new Swift could launch in our country in 2023.