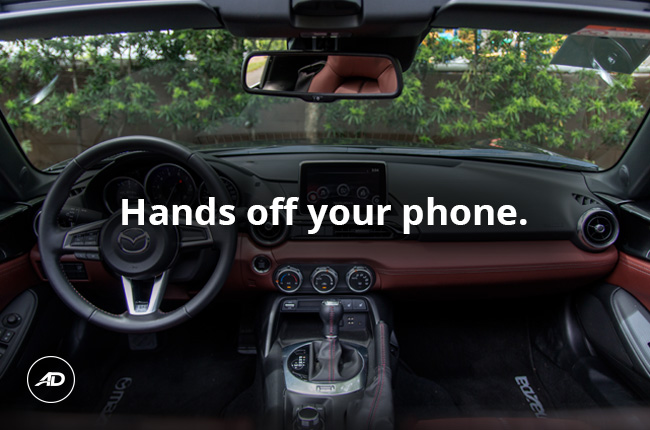 The infamous Anti-Distracted Driving Act (ADDA) got its own share of controversy 2 months ago, lasting only for less than a week before it was suspended. Why? It's mainly because of its unclear implementing rules and regulation (IRR) and issues with its ‘line-of-sight’ ruling, which raised eyebrows among the road-using public.

The Department of Transportation (DOTr) revamped its IRR and is now set to implement ADDA on Thursday, July 6, 2017. Before it completely rolls out, here are the things you should take note of to avoid penalties.

ADDA is all about NOT touching your phone while driving.

That’s right – you can’t touch (more so, use) your phone while behind the wheel. This means you can’t hold your device to make or receive calls; compose, send, and read text messages; perform calculations; play games; watch videos; and browse the internet.

Basically, just leave your phone alone while you’re driving because that’s the whole point of the ADDA – even if you’re stuck in heavy traffic or stopped on a red traffic light. So, don’t even argue on playing EverWing while stuck on EDSA.

Ha! I sometimes bike to work so I’m not covered.

Not-so-fast, my friend. The ADDA is applicable to all forms of transportation (public and private), which also includes pedicabs, bicycles, habal-habals, kuligligs, carts, and carriages. Even construction/agricultural equipment are within scope of the ADDA, may it be pulled by a cow or a carabao, as long as it’s on a public road. Next time you see a kutsero texting, call him out and tell him it’s against the ADDA.

How about Waze? I can’t drive without using it.

Don’t worry. Waze and other navigational apps are still allowed, provided that you set your destination before you drive.

Okay, good. But where am I allowed to place my phone?

There is a designated ‘safe zone’ where you can mount your smartphone, which is 4 inches above the dashboard. This is to not hinder the driver’s line-of-sight and compromise safety. For reference, refer to the infographic at the bottom of this article.

Not at all. The ADDA only covers mobile communication devices (cellphones and smartphones) and electronic entertainment gadgets (e.g. tablets). Dashcams, toys, the ‘nodding dog,’ and other ornaments aren’t covered by the IRR of the law. However, it’s safer for you to put the dashcam behind the rear-view mirror, just so it won’t block your view.

What if my mom calls for a cat emergency? How will I be able to answer my phone?

Cat emergencies are good, as long as you make or receive the call without touching your phone. How? Use your smartphone’s handsfree function such as voice control and loudspeaker. You can also consider buying corded or Bluetooth earphones as they can be pretty handy (pun intended) in these situations. Maybe it's high time for you to use Siri or Google Assistant.

In case of real emergency situations such as medical, explosion, accidents, fire, crimes, and terror attacks, you can go ahead and use your phone to call the authorities.

Who should I watch out for to avoid getting caught?

All concerned government agencies can apprehend you if you violate the ADDA. These include, but not limited to, the Metropolitan Manila Development Authority (MMDA), the Philippine National Police (PNP), special economic zone authorities, and other local government units.

So, I can use my phone if they aren’t on site? Hooray.

No way, Jose. The MMDA uses CCTV footages to monitor violations, which is part of their non-contact apprehension scheme. Ever heard of mayhuliba.com? They’re basically everywhere.

Related: MMDA launches MayHuliBa.com allowing motorist to check if they have violations

If I get caught, what’s in it for me?

Just like baseball, you only have 3 strikes before you get your license revoked. 1st offense will cost you P5,000, while you have to shed P10,000 for the 2nd offense. On your 3rd strike, you’ll be penalized with P15,000 plus a 3-month suspension of your driver’s license.

If P30,000 worth of penalties and 3-month suspension aren’t enough for you, the 4th and subsequent violations will cost you P20,000 and revocation of your license.

Meanwhile, drivers of public utility vehicles (PUVs), school buses and services, or trucks that carry volatile, flammable, or toxic materials who will be caught violating the ADDA within 50 meters from a school will be penalized with a P30,000 fine and a 3-month suspension of driver’s license.