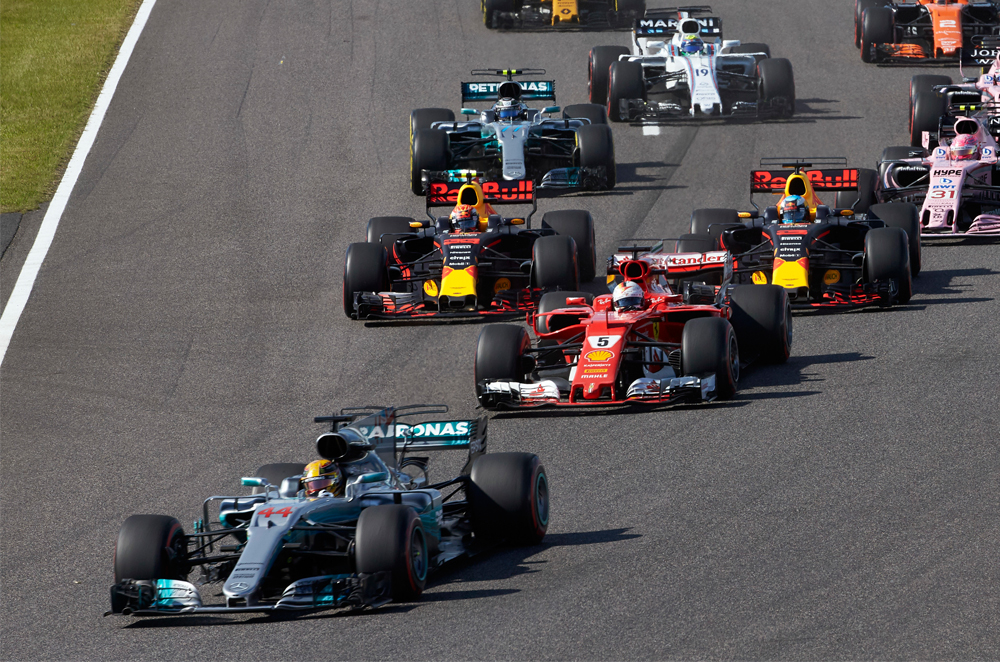 Lewis Hamilton of Mercedes-AMG Petronas moved closer to clinching the driver’s championship after winning the 2017 Formula 1 Japanese Grand Prix. With this, the Briton now has a 59-point lead over his rival Sebastian Vettel of Scuderia-Ferrari.

As the lights went out, Hamilton was quick to defend the lead from Vettel before turn 1. Vettel, who started 2nd, was in all sorts of trouble as he struggled to stay close and maintain a competitive pace. On the 5th lap, things went from bad to worse for Vettel’s championship hopes when he was called into the pits to retire due to a faulty spark plug. Even without his rival on his tail, it wasn’t smooth sailing for Hamilton. The Malaysian Grand Prix winner Max Verstappen of Red Bull Racing took 2nd place in the opening lap and was hot on the Briton’s tail.

In the latter parts of the race, the gap between the 2 drivers was down to just 0.3 seconds with 2 laps to go. Unfortunately for Verstappen, backmarkers blocked his way on the penultimate lap, which gave Hamilton a 1.2-second lead all the way to the finish line.

Scuderia-Ferrari’s Kimi Raikkonen shared a bit of his teammate’s bad luck. The Finn dropped down to 14th after a brief tussle with Renault’s Nico Hulkenburg. But unlike Vettel, who ended his race early, Raikkonen was able to salvage a 5th place finish. On the other hand, Hulkenburg ended his race on lap 41 as his Drag Reduction System (DRS) got stuck open. Force India’s Esteban Ocon and Sergio Perez, who clashed several times in previous races (Canada, Azerbaijan, and Belgium), were ordered to hold their positions until the end. Ocon and Perez crossed the line in 6th and 7th, respectively.

Haas’ Kevin Magnussen finished in 8th, a second clear of his teammate Romain Grosjean in 9th. Felipe Massa of Williams rounded up the top 10, ahead of fellow veteran Fernando Alonso of McLaren-Honda in 11th.

In his final race in Formula 1, Renault’s Jolyon Palmer managed a 12th place finish. Toro Rosso’s rookie Pierre Gasly, who started 17th on the grid, crossed the line in 13th. McLaren-Honda’s Stoffel Vandoorne had a disappointing result in 14th, while Sauber’s Pascal Wehrlein was dead last.

Carlos Sainz ended his final race with Toro Rosso with a bang after he crashed into the barrier at turn 3 of the 1st lap. The Spaniard will be moving to Renault to replace the outgoing Palmer at the Austin Grand Prix on October 22, 2017, while Daniil Kvyat is set to make his F1 return.

Marcus Ericsson of Sauber retired after he made an error at turn 8 which sent him crashing into the wall. Lastly, Lance Stroll of Williams saw his front-right tire explode in dramatic fashion to end his race on the 47th lap.

Going back to the driver’s championship, Hamilton will get the title if he wins the next race in Austin, Texas and if Vettel fails to finish higher than 6th. Another scenario that could get the Briton his historic 4th title is when he finishes 2nd as Vettel crosses the line 9th or lower.

If Hamilton takes 3rd or lower, however, Vettel still has a chance to win the coveted driver’s championship. Will there be a new Formula 1 champion next race? With 4 races to go, we’ll just have to wait to find out.