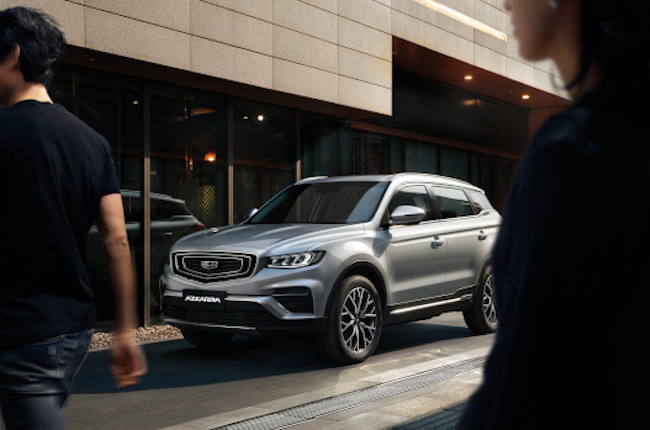 Geely Philippines formally launches the Azkarra to the Philippines with an online launch. Official photos and videos have been released via a live stream from the brand. The compact crossover from the brand that brought us the Coolray, is now officially here in the country. Rolling through with a 1.5-liter motor mated to a 48-volt mild-hybrid system in its top of the line trim, Sojitz G Auto Philippines (SGAP) compiled a video presentation for the new Azkarra, involving executives and team leads behind the design and development of the model to adapt to the new normal. Notable to the Geely brand, the exterior and interior are nothing short of impactful. Just like its smaller sibling, it showcases the company’s signature angular but refined design in the exterior, and its refined and elegant interior. Also clad with technology, the front carries a pair of LED headlights and daytime running lights. The crossover rolls on 18-inch aluminum wheels for all variants and features a MacPherson strut for the front suspension and a multi-link rear. The fully-independent setup allows the Azkarra to have a refined ride that is easy to take over almost any road surface. 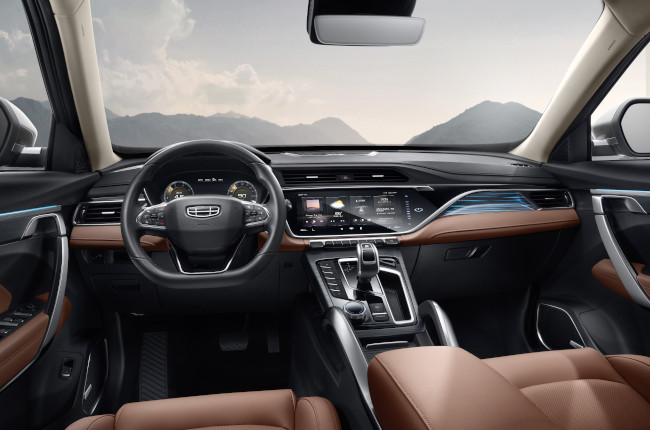 Refined and elegant, the Azkarra has a striking exterior matched with an exceedingly classy interior. Clad in light-colored Nappa leather, solid interior inserts, and highly refined materials, the Azkarra is a larger but splitting image of its smaller stablemate, the Geely Coolray. To ease consumers’ worries about airborne contaminants, all Geely automobiles will get a CN95 air filter that is capable of barring particulate matter with diameters larger than .74 microns, which can help defend against pathogens in the air. As a compact crossover, the Azkarra features seating for 5 and a large rear cargo area. As for tech, the Azkarra comes loaded with features for the modern age. Exhibiting an almost all-digital interface for most of its features, the Geely Azkarra comes equipped with a 12.3-inch infotainment screen that matches well with the digital gauge cluster. A digital shifter is also in play as is an electronic parking brake and a 6-way power seat. Another feature highlight is the 360-degree camera that outputs to the infotainment screen and is complemented by parking sensors on all corners of the car. As an extra feature, the crossover also supports wireless charging for phones that support the Qi wireless standard. As for safety, the Azkarra comes with a full suite of 6 airbags, ABS with electronic brakeforce distribution, traction control, electronic stability control, hill start assist, and hill descent control which are all standard throughout the lineup. As a mild-hybrid, the Azkarra serves as a catalyst for the Geely brand in the hybrid vehicle category, which is starting to gain traction in the Philippines. The electric motor is paired with a 1.5-liter turbocharged 3-cylinder motor. Combined, the power figure of the Luxury variant of the  Geely Azkarra is rated at 190 hp and 300 Nm of torque, while the non-hybrid Premium variants have the same engine that produces 177 hp and 255 Nm of torque.

right now, we see that the auto industry is gearing towards hybrid and electric vehicle technology as it becomes increasingly popular.
Mikihisa Takayama
SGAP President and CEO

With the good impression the Coolray left, Geely Philippines wants to further its brand in the country through a larger and more advanced offering for the market in the form of the Azkarra. Geely Philippines is proud of its latest model that was even dubbed the ‘the most beautiful SUV in China’ when its first generation made its debut.

Starting at only P1,438,000 and topping off at P1,598,000, the Azkarra is quite packed for the price you pay. Geely Philippines has also extended a promo for those that will reserve the Azkarra before July 31, 2020, in the form of a P100,000 discount, which makes the Azkarra even more affordable for a limited time. Available colors for the model are White, Blue, Silver, Red, and Black.

If you're ready to buy Geely Azkarra, you can reserve online!