Kia looks to further strengthen its foothold in the crossover segment with the debut of the all-new 2017 Sportage at the on-going 2015 Los Angeles Auto Show. Here are some of the changes that caught our attention.

Up front, the vehicle still carries the brand’s trademark tiger-nose grille. But new to the fascia are the redesigned headlights located just above the grille flanks. This provided space for the new vertically-designed fog lamp housing with integrated air intakes.

Design retouches were kept to a minimum for the vehicle’s side profile. These include a slightly longer wheelbase but shorter front and rear overhangs. Meanwhile at the back, Kia increased the size of the rear glass to provide improve visibility. They also fitted new sets of LED tail lights. Looking inward reveals a new driver-focused interior design that’s highlighted by a “dual-zone” center dash layout. It features a touch screen display which is angled 10-degrees facing the driver.  While the bottom part of the housing has the controls and dials cluster also facing the driver at 10-degrees.

The all-new Kia Sportage comes packed with a number of tech amenities like Bluetooth hands-free mobile phone connectivity and satellite radio streaming courtesy of SiriusXM. It’s also the first Kia to roll out with the next-generation UVO3 infotainment system. This system supports Android and iOS based devices through Android Auto and Apple Carplay respectively. Furthermore, UVO3 also has 14 telematics services and 8GB of music storage space. 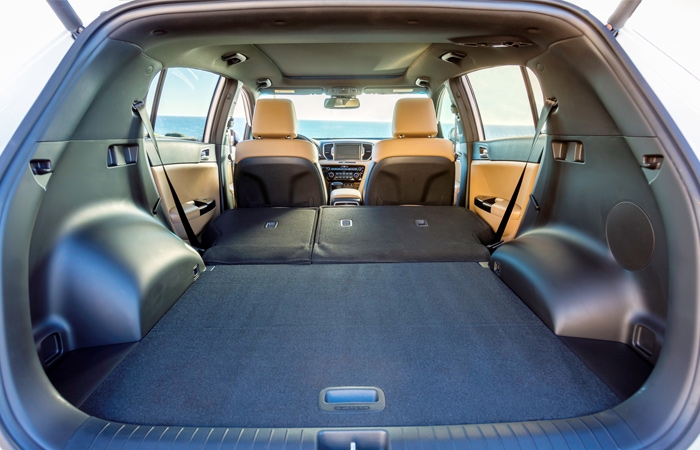 Giving life to the SX Turbo variant of the all-new Sportage is a 2.0L inline 4-cylinder turbocharged engine that can produce 241 hp and 353 Nm of torque. On the other hand, the LX and EX variants will get a more powerful normally aspirated 2.4L engine that can pump out 181 hp and 237 Nm of torque. These promise a better fuel efficiency rating according to Kia. The all-new Kia Sportage has also added amounts of Advanced High Strength Steel (AHSS) to its foundation. This greatly improves structural rigidity by 39% over the outgoing model. AHSS also was used to reinforce the A, B, and C pillars as well as side sills, roof framing, and wheel arches.

The current Kia Sportage model has reached its prime as the brand’s entry into the crossover segment. As with all things, it too has to catch up with the times. The all-new 2017 Kia Sportage will do just that. While the world awaits for its availability, its current model here in the Philippines still stands strong.

To learn more about the current Kia Sportage, visit the AutoDeal Car Guide.