After publishing a few teaser photos, Mitsubishi has unveiled the all-new Eclipse Cross ahead of its global debut at the Geneva Motor Show. The compact SUV, which is a far cry from its previous coupe version, will join the Japanese brand’s global lineup of crossovers such as the ASX and Outlander. 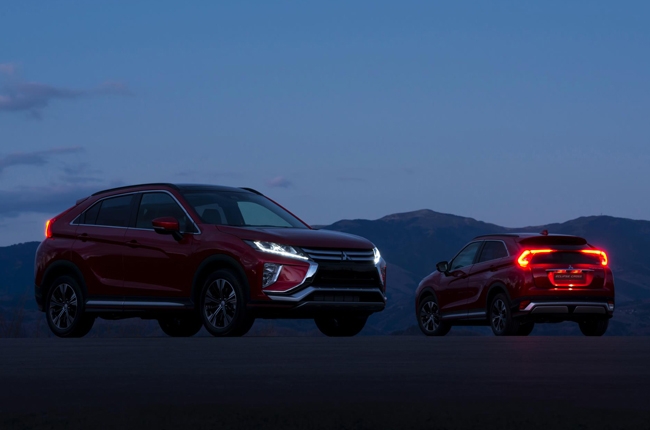 The Mitsubishi Eclipse Cross has a mix of a coupe-like silhouette and tough SUV design. This is highlighted by the compact SUV’s high ground clearance, skirts, sloped C-pillar, and the brand’s Dynamic Shield Design. At its back, the taillights are embedded on the C-pillar and joined by the 3rd brake light which crosses the rear windshield.

This compact SUV measures 110 mm longer, 35 mm wider, 60 mm taller than the Philippine-spec ASX. Interestingly, the Eclipse Cross and local ASX have the same wheelbase of 2,670 mm, despite the former having the larger dimensions. Will they have the same legroom?

Under its hood, Mitsubishi has slated 2 turbocharged powertrain options—a 1.5 L gasoline and a 2.2 L diesel variant—for future owners to choose from. The former will be paired to a CVT with an 8-speed Sport Mode Manual Override, while the latter will have an 8-speed slushbox available.

Although the power figures haven’t been disclosed as of this writing, Mitsubishi says the compact SUV will come with an electronically-controlled 4WD system. According to the Japanese carmaker, this will send the optimum torque to its rear wheels depending on driving situations and surface conditions. As for its interior, the dashboard features silver metal frames and a black/silver monochrome color scheme. Meanwhile, the Eclipse Cross is loaded with a heads up display, Smartphone Link Display Audio System, and a touchpad controller for ease of access. In addition, the head unit can connect via Apple CarPlay and Android Auto, which provides the compact SUV’s occupants with plenty of things to do during trips.

The Mitsubishi Eclipse Cross will be shipped to Europe around the Q3 of 2017, then to Japan, North America, Australia and other regions later this year. Does this mean that we can get the Eclipse Cross in the Philippines? Well, Mitsubishi Motors Philippines Corporation hasn’t announced any plans of bringing this compact SUV to our shores. Hopefully, they will.