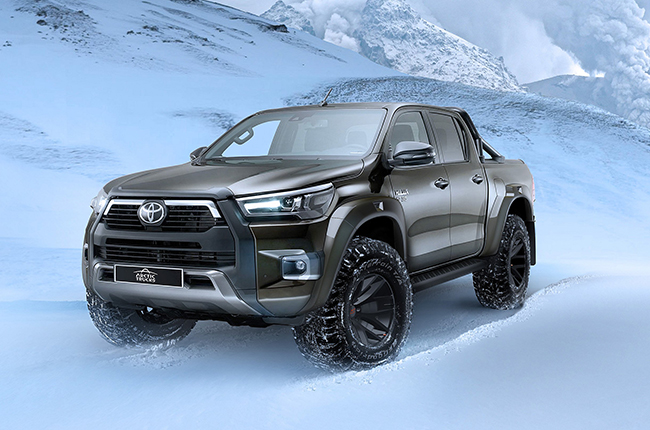 Arctic Trucks just released its latest version of the Toyota Hilux AT35 that was based on the newly facelifted model, specifically the Invincible X double cab which serves as the equivalent of the Hilux Conquest in other territories. The Toyota Hilux serves as one of the most trusted nameplates in its segment. Apart from its tried and tested selection of diesel engines, the midsize pickup also carries Toyota’s reputation for reliability. A version was done by Arctic Trucks, a team that is no stranger to modifying the Hilux. Notably, they have partnered up with a lot of automakers that have special or upgraded 4x4 models, and Toyota is a brand that keeps getting chosen by the brand. From Land Cruisers to other rugged rigs, Arctic Trucks have a reputation for creating some of the most desirable off-road kits for vehicles that deserve them.

In comparison with the pre-update model, the facelifted Hilux AT35 features a range of exterior updates. Notable additions include wider wheel arches that should accommodate its 17x10” wheels with 315/70/35 BFGoodrich K02 tires and wider track. It also comes fitted with under-chassis armor that protects the frame and engine from damage. The AT35 is also a bit larger than the model it’s based on, with it gaining an additional 90mm of width and height, but its 5325mm length has been retained.

Another noteworthy upgrade includes the Bilstein Performance Suspension System that has different springs, dampers, shackles, anti-roll bars, and more. That said, the suspension upgrade rewards the Hilux AT35 with a 40mm of lift in the front and 20mm lift in the back. For better traction, buyers can opt for a more capable set of KM3 tires but that extra comes at a premium.

As for its powertrain, no tweaking or adjustments were done. Instead, the Toyota Hilux AT35 still uses the tried and tested 2.8-liter turbo diesel engine that produces a healthy 201 hp and 500 Nm of torque. Although, it is worth noting that Arctic Trucks re-gear the front and rear differentials to suit the system for better torque and drivability over any terrain.

For now, it’s unlikely for our market to get this ultimate off-roader, as Arctic Trucks do not operate here locally. Arctic Trucks are also quite selective about where their parts are sold, so you may not find this kit readily available in the Philippines, at least not in the white market.