You probably caught the Nissan Formula E car (on our previous article) that was demonstrated at the Fuji International Speedway in Japan. The electric racing machine wasn’t alone, as it was accompanied by the appearance of the all-new LEAF Nismo RC.

Unlike the usual LEAF appeal, which has the hatch-y curvy look that's similar to the 2017 Nismo concept, the LEAF Nismo RC boasts lower and wider stance. As its name suggests, this takes the form of a race car, which is where the RC is derived. Although it looks a lot different than the brand’s normal EV, Nissan claims that it still is a LEAF in spirit. The LEAF Nismo RC was first seen in Tokyo earlier this year. 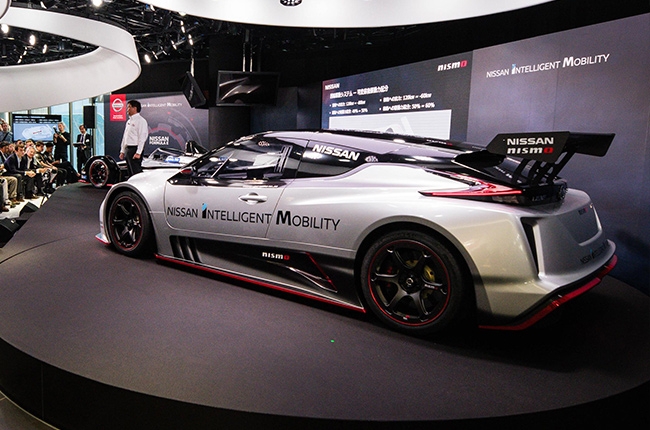 On the exterior, the LEAF Nismo RC sports a long hood, with the signature V-motion grille highlighting the front end. The more aggressive fascia is complemented by the strong rear, with taillights similar to the shape of the ones on the Z car. Also, Nissan painted the car with a combination of silver and black, with red Nismo accent. If your eyes are good when it comes to details, you’ll notice that the paint job is quite similar to the Nissan Formula E car. The reason behind this distinctive paintwork is to make the car seem like it’s moving even when it’s standing still.

Even more interesting, the car features a three-piece bodywork with removable front and rear sections, fixed windows, LED headlamps and taillights, and an adjustable rear wing. The body is longer on the LEAF Nismo RC, which measures 4,546 mm with 2,750-mm wheelbase. The car is made up of lightweight components, plus full carbon-fiber racing monocoque structure, weighing only 1,220 kg. With that laid on the table, power-to-weight ratio boasts a 3.4-second zero to 100 km/h sprint. That’s 50% faster than the previous model.

Related: Nissan isn’t stopping with the Leaf — to produce more EVs by 2022

Now, to the more technical aspects of the car. The LEAF Nismo RC is integrated with a new all-wheel drive system that blesses the car some impressive cornering abilities. Power is independently to each axle, which instantly supplies torque to the tire with the most grip. This makes maneuvering quicker and more efficient, especially when on the track.

As much as Nissan can tell us about weight-related stuff and aerodynamics, it all goes down to what powers the car under the hood. There are two electric motors in the engine bay, each powers the car with 161 hp (120 kW) – that’s 322 hp combined. These also grants the car 640 Nm of instant torque to the wheels. In addition, the drivetrain technology on the all-new Nissan LEAF Nismo RC includes high-capacity lithium-ion battery and inverters.

"The all-new LEAF NISMO RC shows how we're setting our sights even higher when it comes to raw power and performance – making electric vehicles even more exciting for customers. It's our most thrilling expression yet of the philosophy of Nissan Intelligent Mobility."
Daniele Schillaci
Nissan's global head of marketing, sales and electric vehicles executive vice president