Toyota and Suzuki are further strengthening their ties, particularly in the development and production of automobiles for the Indian market. Since 2017, both companies have aimed to leverage each other’s strong points, with Toyota’s expertise in electrified vehicles and Suzuki’s might in compact models coming to the forefront.

In that regard, Toyota India appears close to launching a new model developed in collaboration with Maruti Suzuki. It’s called the Toyota Urban Cruiser Hyryder, and it might just be the next hot vehicle to come from the Japanese-born automakers. 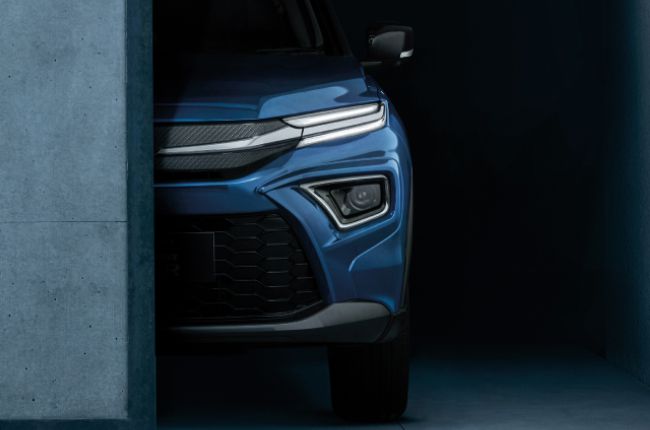 Toyota India has released the first official teaser photos of the new model ahead of its expected unveiling on July 1, 2022. From our limited first look at the vehicle, it seems the Urban Cruiser Hyryder is a subcompact crossover that could compete with the likes of the Kia Seltos and Hyundai Creta. Only the front fascia and the front wheels are visible in the teaser photos, showing a sleek LED headlight setup, rather highly-positioned fog lamps, and squared-off fender flares above two-tone, multi-spoke wheels. The preview unit is dressed in a brilliant blue paint scheme.

As for powertrain options, there could be two hybrid engines, with one being of the self-charging variety. Toyota has so far not released any specifications, but that will come soon enough. We do know that production of the model is set to begin this August in India. We also caught a glimpse of the Urban Cruiser Hyryder’s interior, with a teaser video showing brown leather upholstery, a smartphone-enabled air conditioning system, and an elevated touchscreen infotainment unit.

Other than that, details for the new model remain scarce. Stay tuned this week as Toyota unveils the Urban Cruiser Hyryder for India. The last bit of good news is that Toyota is reportedly planning to export its newest model to other markets, including emerging countries in Africa. Could we also get this vehicle in the Philippines? We have our fingers crossed.