As mentioned in my review of the Toyota Yaris, subcompact hatchbacks have a special place in my heart. Among the contenders in this segment, however, there are two nameplates that I think stand out from the rest, aesthetically: the Mazda2 Hatchback and Honda Jazz RS.

I’ve driven the Jazz RS before, and it reaped compliments in a lot of things other than design. On the other hand, the Mazda2 Premium Series has never been on our hands, well, until recently. Mazda Philippines handed over its latest addition to the Premium Series family of the ‘2’ hatchback – the Mazda2 Premium Java. And quite frankly, it couldn’t get any sexier with its new color scheme.

Performance
Engine Output (HP), Acceleration, Transmission, Handling 4.0/5
Design
Exterior & Interior Design, Quality, Fit and Finish, Ergonomics 4.5/5
Ride Comfort
Cabin Comfort, Suspension, NVH Insulation 4.0/5
Safety and Technology
Convenience Technologies, Active and Passive Safety Features 4.5/5
Value for Money
Amount of the vehicle you get for the price, Fuel Efficiency 4.5/5
What You Will Like
What You Won't Like
How We Do Our Reviews The first thing you’ll notice with the Mazda2 Premium Java is its quirky choice of colors that aren’t found in any other stock production vehicle. Quirky, but appealing. The Titanium Flash hue is like grey bordering into brown, while the Burgundy accent color is near the shade of violet. The combination is surprisingly good, and in combination with the Mazda2 hatchback’s abundant curves, it made the car look sultrier than the non-Premium variants.

The violet-ish accents give a unique paint to the 2 Hatchback’s exterior upgrades, such as the side and front skirts, rear diffuser, and rear spoiler. Such accents can also be found on the grille and side mirrors. Although, I think the red decals on the 16-inch rims aren’t the best combination with the violet color, but that’s just one man's opinion. Another best trait of the Mazda2 Premium Series is its LED lighting configuration, front and back. Aside from making the car a pleasure to look at, the LED headlamps keep the roads well lit. Every bit in this car is well thought out, proof that Mazda’s Soul of Motion design language is a force to be reckoned with. Kudos to Mazda for that.

The Mazda2 is the smallest among subcompact hatchbacks, measuring 4,060mm long, 1,695mm wide, and 1,495mm tall. Although it may appear a disadvantage when compared to its rivals, its size isn’t much of an issue when inside the car. 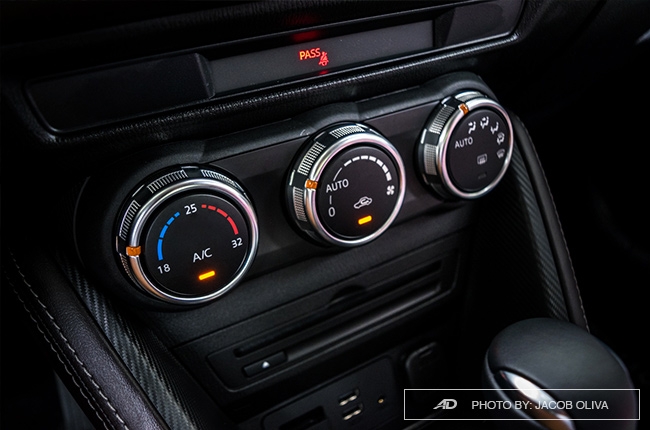 At my height (5’6”), sitting behind my normal driving position isn’t a problem at all. If all five occupants are of my height and built, the Mazda2 Hatchback can fit everyone without any complaint; anyone taller (or wider) would mean discomfort, though.

Trunk space is also limited, with only one large luggage and a few knapsacks can fit the cargo area when the rear seats are erect. However, if you must use the car for cargo at the expense of three rear passengers, folding the rear seats and removing the trunk lid open up a huge space for just about anything, just like any subcompact hatchback. It’s an entirely different story when you’re the one sitting behind the steering wheel. There are only a few plastic parts inside the cabin, and when it’s indeed plastic, you’re assured that it’s soft-touch and easy on the eyes. The Premium Series-exclusive brown leather accents on the dashboard and door panels are a welcome feat, as well as the leather seats with suede. The latter keeps your buttocks in place and doesn’t heat up easily when the car’s left in a sunny parking lot.

Another thing to rave about the Mazda 2 is its seven-inch floating touchscreen infotainment system. It’s painless to operate, and just in case touching the screen isn’t your thing, you can control it either through the MZD Connect knob near the gear shifter or via the audio controls on the steering wheel. Smartphone pairing is also flawless, and there are two USB ports for charging and a 12-V power outlet.

The head unit is also navigation-ready. What impressed me is how it works passively in the background. It displays upcoming intersections on the top of the screen, while road speed limits are detected and also displayed on the head-up display (HUD), together with your current speed. Convenient driver-assist features are present, too, such as automatic headlights, rain-sensing wipers, backing camera, rear proximity sensors, and speed-sensing door locks. If I were to wish for something more, though, the car has limited space for smartphones and there’s no console box in between the driver and front passenger. For the entire car, you’re limited to two cupholders in the middle, and two bottle holders on the front doors, and absolutely no toys for the people sitting at the back.

As for comfort, the Mazda2 Premium Java’s suspension behaves just like any other subcompact hatchback: not too stiff, not too bouncy. It can absorb road imperfections within reason, but overall, ride quality is above average. NVH isolation is also commendable.

Overall, the sultry exterior of the Mazda2 Premium Java matches the sensual flow of things inside. It’s really not hard to lust after this car while in the driver seat. The choice of materials, the design execution, basically everything that your eyes see and your skin touches are nice, proving that it deserves the Premium Series moniker. With that, you might as well put on some Marvin Gaye CD, pour some chilled red wine, and have a date with the car. Too much? But that’s really how it felt, well, minus maybe the date with the car, but you get my drift. Aside from the sensory-uplifting design execution in the car’s cabin, you’ll also feel the urge to drive the car just by seeing it. And though driver’s seat is manually-adjustable, it also has height-adjuster and the steering wheel is telescopic, which makes finding your ideal driving position easy as pie.

That sense of driving is well-matched by the 1.5L SkyActiv gasoline engine inside the Mazda2 Hatchback’s bonnet. Granted, its 107 hp and 139 Nm of torque are less than what its rival, the Honda Jazz RS, can produce. However, the six-speed SkyActiv-Drive automatic transmission did its job well to send that power to the front wheels with precise timing. The car wasn’t oozing with power, nor did it lack pull when needed. It was just right, which gave a feeling of contentment with every drive. Now, if you feel the need for more power, there’s an option to switch to Sport mode, but of course, that would mean increased fuel consumption. You could also manually shift gears via the gear shifter or its paddle shifters. Not that you need to, but in case just right isn’t enough, you have your room.

In terms of handling, the Mazda2 Premium Java has a light steering feel, which makes it very maneuverable within tight city streets. That loose steering feel tightens as you reach 60 km/h and above, which, in combination with the car’s G-Vectoring control, accounts for a more precise steering. It made driving on winding roads feel safer and more comfortable. Braking, on the other hand, was a cinch with its front and rear disc brakes.

With this engine performance, the Mazda2 Premium Java registered notable fuel consumption figures. Highway runs at an average speed of 90 km/h clocked in 23.6 km/L, while in-city traffic during rush hours read 9.3 km/L. Faster paces at around 60 km/h gave out a 15.7 km/L reading. These were impressive numbers, mind you. 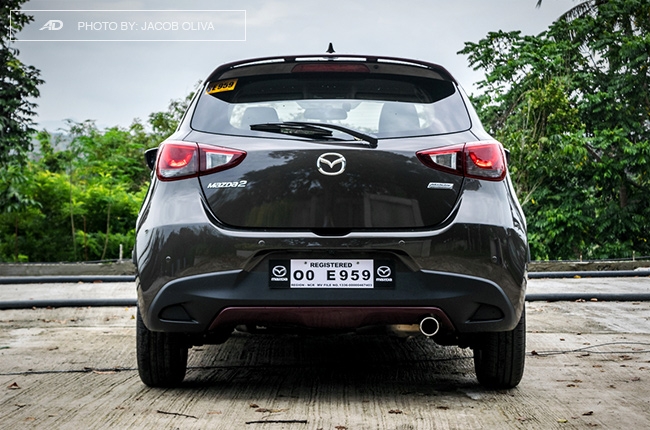 With all these things considered, the Mazda2 Premium Java is a value-packed offering from the Japanese brand even with its price tag of P1,085,000. Yes, that figure is arguably steep for a subcompact hatchback; some might even say that you can already buy a bigger compact car just by adding a bit more to this number.

However, the Mazda2 Premium Java isn’t just an entry-level vehicle. It proves well enough its Premium-ness, and definitely for buyers who want the best in a small car, and by best I mean it can even surpass the quality of bigger compact cars. With all the things it can offer, including the shower of airbags and YOJIN3, it isn’t a bad value proposition at all.

In short, if you want a car that gives back what you paid for, the Mazda2 Premium Java should be on top of your list. 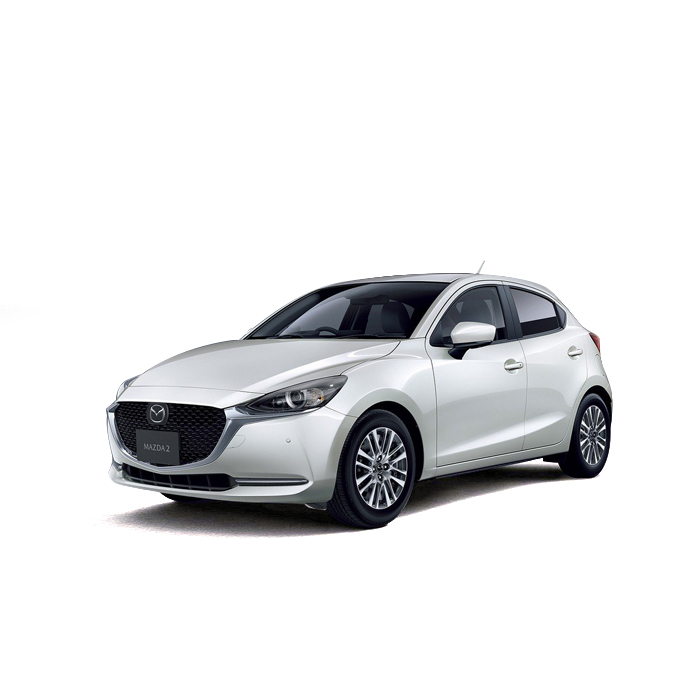 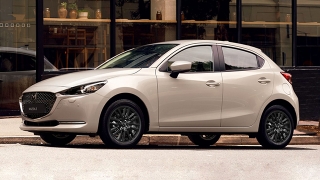