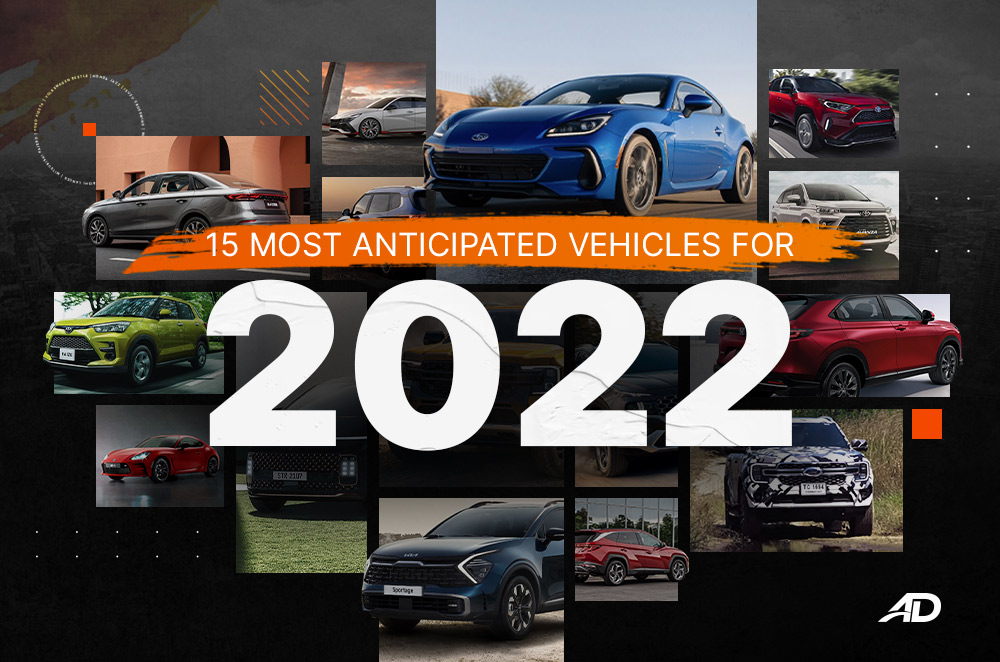 2022 is officially here and the start of the new year means a whole new set of cars that are just waiting to be released into the local market. While some of these vehicles were already announced to launch in 2022 last year, others are still waiting in the wings for their official releases. With that in mind, we have created a quick list of the 15 most anticipated vehicles that will or probably will make their way into the Philippines in the coming year.

As a bit of a disclaimer, not all of the vehicles mentioned may officially launch in the country and are still subject to the discretion of their respective manufacturer. With that out of the way, on to the list. Geely Philippines has proven to be a success in the crossover segment of the country with the introduction of Coolray, now the automaker wants a piece of the sedan pie as it plans to launch the Emgrand. While its official specifications have yet to be revealed, what the vehicle looks like has already been revealed online with multiple sightings of the car. Unlike its crossover and MPV brothers we expect the Emgrand to come with a 1.5-liter naturally aspirated gasoline engine which puts it right in contention with the likes of the Honda City and Toyota Vios. The pricing and its official launch date are still unknown but we expect it to arrive within the first quarter of 2022. Having made its debut in Thailand back in 2021, the Honda HR-V could be making its Philippine debut soon. The Japanese automaker has been tight-lipped about the specifications, but we can expect it to have similar specifications as its Thai counterpart. With that we expect the model to carry over some of its original engine options and probably be available with a hybrid drivetrain. It's no secret that the crossover segment in the Philippines is a lucrative one. We see more and more brands releasing their new models designed for this segment. With that in mind, Toyota wants a piece of this pie with the pending launch of the Raize. It will slot right under the Toyota Avanza and just above the Toyota Wigo. As this model will be coming from Thailand we expect that it will come with either a 1.0-liter turbo motor or a 1.2-liter naturally aspirated engine. Another model set to make its debut this year is the all-new Toyota Avanza. It features more modern styling and a new chassis that offers a smoother ride. Aside from its new looks and slight bulk-up in size, the MPV now has a new transmission. It ditches its former four-speed gearbox and is now available with a CVT. Just like before it still can be had with either a 1.3-liter or 1.5-liter naturally aspirated gasoline engine. We expect this new model to launch within the first quarter of the year. Toyota Philippines has been on a hot streak lately with the introduction of hybrid vehicles in the country. First, it was the Prius which did decently, then it was the Corolla Altis Hybrid which was then followed by its Corolla Cross hybrid, and now it’s the Toyota Camry Hybrid. With hybridization looking to be the theme for the Japanese automaker, it looks like a RAV4 hybrid could be next on its launch list after it deals with the Raize and the Avanza. With no official timeline set for the RAV4 hybrid just yet, we estimate that it will probably make its local debut sometime towards the end of the year. You’ve probably heard about the new Subaru BRZ launching over in America, well it’s now time for the iconic sports car to make its way into the Philippine market. The Japanese brand has already teased in 2021 that it will be launching the sports car locally in 2022. Now that 2022 is finally here the new BRZ is set to launch sometime in April if things go according to plan. The new BRZ now packs a 2.4-liter naturally aspirated engine and features a smoother yet still sporty design language. Since the Subaru BRZ and the Toyota GR86 are mechanical twins, we can also expect Toyota Philippines to launch their own version of the sports car within the year. Unlike its Japanese partner, Toyota has yet to release any information as to when it plans to launch the sports car locally. However, we can expect them to launch the GR86 sometime within the first half of the year, or who knows they might just launch it right after their Subaru counterparts. Teased last year and officially launched in Thailand, the all-new Ford Ranger is set to make its local debut in the Philippine market soon. While it features a more F-150-like design, it brings with it a host of new features that many will surely enjoy with the pickup truck. It also may come to the local market with a new and more powerful V6 diesel engine option. Unlike its pickup truck counterpart, the all-new Ford Everest has yet to be officially launched in the ASEAN region. However, it has already been teased globally and shares much of the same design language as its brother the Ranger. While specifications are still unknown we expect it to be a comfortable cruiser and a capable offroader. With not many details available we suspect that this SUV will make its way into the local market within the later half of the year. Another model that made its debut last year was the Kia Sportage. It features the brand's latest and more aggressive design language and comes with the latest technology. The version being sold here is entering its veteran years in the segment and is at the ripe age for a new model change. With that said the all-new Sportage could soon make its way into the country as part of Kia’s upcoming vehicle launches. Details about the vehicle’s official launch aren’t readily available so we will just have to wait to see what Kia Philippines has in store for the coming year. Kia Philippines has an extensive lineup of vehicles in the country, however, it is missing one key vehicle type in the form of an affordable MPV. While the South Korean automaker does have a van, the Kia Carnival,  within its local vehicle lineup it has yet to bring in a vehicle that will bridge the gap between it and the Kia Sorento. Because the Kia Carens was once sold here and recently made its debut in India, we could soon see the MPV make its way to our local shores within the year. Details are still sparse as Kia has been quiet on the manner and has not yet released any plans about officially releasing it here. The automaker has teased, however, that it has plans to launch several vehicles in the country in the coming months and the Carens might just be one of them. The current generation of the Hyundai Starex has been in the local market for quite some time now and is at the prime age for an all-new model replacement. While the van does not have an all-new model, it does have an unofficial successor in the form of the Hyundai Staria. The new van comes with a futuristic design inside and out and comes with many of the automaker’s latest technologies. While its official launch by Hyundai Philippines is still a well-guarded secret we expect the model to be unveiled locally within 2022. Ready to go head to head with the likes of the Honda Civic and the Toyota Corolla Altis is the new and sharper-looking Hyundai Elantra. Just like its Starex brother, the current model benign sold locally is in its prime and is ready for a replacement. Its specifications for the Philippine market are still unknown, however, we could see it being made locally available with a naturally aspirated engine. There are still no official details as to when Hyundai Philippines will launch the sedan, but we suspect that it might enter the local market within the year. Another possible entry that Hyundai Philippines might bring within 2022 is the all-new Hyundai Santa Fe. Just like the newer models in the South Korean automaker’s global lineup, this crossover features more aggressive styling than ever and comes with a plethora of features. It also still carries over some of its popular powerplants such as its uprated turbo diesel engines and its gasoline hybrid counterparts. With its twin the Kia Sorento already being sold locally the chances for the Santa Fe to make it into the local market area already looking great. Just like its Santa Fe brother, the Hyundai Tucson could also be making its way into the country. It comes with a new sportier design similar to the rest of the new vehicles that Hyundai has been pushing out and is also well equipped as it features the latest technologies that the brand has to offer. It also comes with a lineup of powerful engines which do include diesel and hybrid powertrains. However, Hyundai Philippines has yet to release any information on the crossover, so we expect it to launch in the latter half of 2022.