The year 2021 has a bumper crop of many new models from some of the best brands in the country, as well as some new entrants that jumped the line and went straight to the top of everyone’s wishlist.

We’re noticing that there are still some models that are still holding on to or dropping a few places in our top most-inquired-for lists that made it from our 2019 and 2020 Industry Insights. It’s an interesting turnout for 2021, and it seems that Filipino car-buying preferences are skewed to these models. Oh, and for the first time in a while, the vehicle in the top spot isn’t a Toyota. The first entry into our top 20 is the Honda City which was updated in 2020. A total redesign reinvigorated interest in the subcompact sedan and brought its appeal to more mature audiences. The new City is classes things up with an Accord-like design, and for the first time since, the model is available with a brand-new engine that has dual-overhead-camshafts and a slightly tweaked powerband. Mitsubishi locked in its first spot on the list with the Mitsubishi Strada, the brand’s premier midsize pickup truck. While the model hasn’t been getting that much attention in recent years, it still retains the 19th spot on the list which is a testament to how many people love the platform. The Mitsubishi brand inspires a lot of trust with consumers, and with the Strada’s stellar reputation, durable engine, and powerful figure across the board, it’s no wonder that the model retains its popularity until now. On top of that, it’s a Mitsubishi. Following its pickup truck cousin is the Mitsubishi Montero Sport. While the model made headlines back in 2016, it’s still making a lot of owners happy to this day. The model’s popularity continues to hold in the market, but it loses out a little having been untouched by Mitsubishi since 2019. Newer models may have overtaken it, but the Montero Sport continues to be a household name. We’re surprised that the Toyota Wigo didn’t rank higher this time around. There is also a general shift away from smaller vehicles in favor of four-wheelers with more utility. Bigger cars returned into favor as the end to the COVID-19 Pandemic was nearly in sight. Fewer lockdowns and eased travel restrictions made buying a big car worth it again, but don’t let that take away from the value that the Wigo brings especially to families and would-be car owners on a budget. 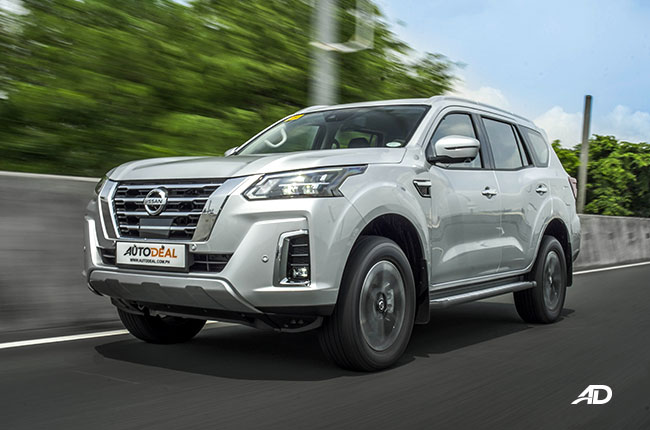 One of our top picks that were released in the previous year is the Nissan Terra. The brand made a complete 180-degree turn when working on this model’s redesign, especially with regard to its interior. The model made headlines when it was first released, and it’s one of the better-driving SUVs out in the market. The Brio gets a leg up over the Wigo within its segment. Honda’s small hatchback is still making waves to this day, which is a shock since the model was released all the way back in 2019. We’re sensing that a new facelifted or updated version may be in the works soon as the Honda City, Civic, and Accord are all on Honda’s new design language. Still, even if it is untouched since launch, the Honda is still compelling enough with its sharp looks and best-in-class engine performance. A few years back, the Fortuner was a the top of everyone’s wish lists due to the fears of a monumental price increase brought about by the excise tax, and now the nameplate is still alive and well thanks to a very exciting update. A new LTD variant is now the one to beat in the Fortuner lineup, and its sharp looks will go on to spread across high streets and highways of the city and beyond. Oh, how the mighty have fallen. The Toyota Rush drops off from the top tens all the way down to the thirteenth spot on this list. Perhaps the MPV “Rush” is over and many consumers are either looking to upgrade or want a vehicle in a different segment. Either that or everyone who wanted a Rush already got one. Still, the seven-seater still has a good amount of traffic on our website, and an update could bump this model up several notches, after all, it’s been almost five years since this model first hit dealerships in the Philippines. Toyota Motor Philippines’ Vios is still the number-one ranked subcompact sedan in the market. With local production and a cult following of enthusiasts, business owners, and operators, the humble subcompact still continues to make other brands scared of entering the market with their own models. As a vehicle, it ticks all the boxes and it may even promise an exciting drive thanks to its exploits in Gazoo Racing’s Vios Racing Festival. Inspiring confidence on the race track and on the road, it’s the prime choice for companies, transport providers, and owners alike. Yet another MPV falls off from the top ten. The Xpander was one of the hottest-selling models in the Philippines unseating Toyota as the number one most inquired for model on AutoDeal. Over the Rush, the Xpander promised a better ride and an arguably better drive, and it was updated throughout its lifespan to keep things fresh. The Xpander also got a burlier brother alongside it, the Xpander Cross. While the former was a hit, the latter was a little over the top which appealed to some. However, why mess with an already great formula? The Xpander makes it to eleventh place on this list, which could indicate that the market is probably through with being MPV crazy, but we’ll never know until next year if that statement holds. 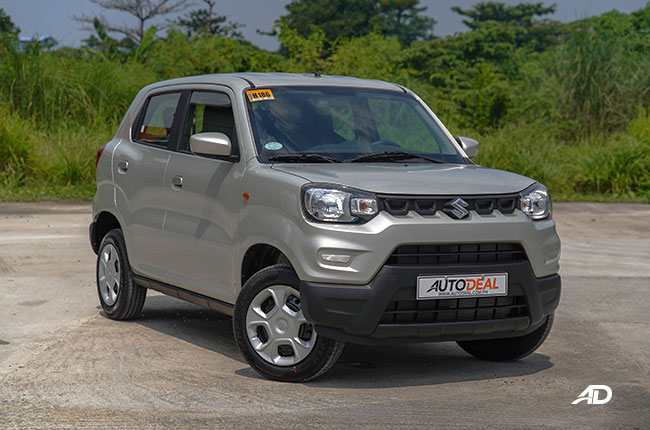 Now we get into the top 10, and kicking off the second half of this list is the Suzuki S-Presso. When it was first launched, the model’s quirky looks earned it many glances during our testing. It was a straight-up quirk machine in terms of styling, and it had a respectable drive even with its 1.0-liter engine paired only with a manual transmission. Perhaps the manual gearbox kept it from climbing several spots, but it’s a good thing that many Filipinos are still able and want to drive manual transmissions even if traffic is a thing. One of the rockstars of the subcompact crossover segment in the Philippines, the Geely Coolray continues its streak of popularity even after nearly three years in the market. The Chinese brand made its presence known with the Coolray, which presented a killer value-for-money proposition. On top of that, it was a real segment shaker with its premium and luxe interior materials along with its amazing 1.5-liter turbocharged three-cylinder that gave all other brands a run for their money in terms of straight-line speed and acceleration. It was only a few months since the Isuzu mu-X was launched, but it managed to gain enough traction and bag a top spot in this list. Coming in at number eight, Isuzu’s newly-refreshed midsize SUV gets a total and complete overhaul from its interior all the way to its exterior. The Japanese brand also breathed new life into its engine by giving it a power figure that can match its rivals. It’s one of the most-inquired-for models in the Philippines today because it’s a trusted brand that finally has a commanding presence. 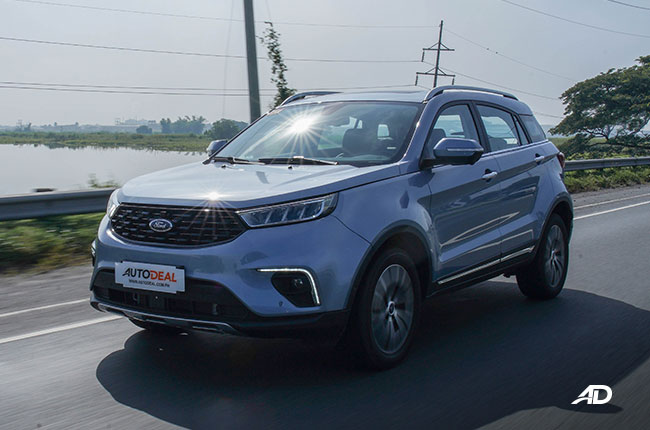 Ford broke new territories with the Territory. It’s the brand’s first JMC-sourced model in the compact crossover segment. For the price you pay, it’s one of the most well-rounded crossovers with decent amounts of space and a good amount of power brought about by a turbocharged four-cylinder motor. The Ford Territory ends up on lucky number seven on this list, but it’s not the most inquired for crossover. It’s the most inquired-for crossover, however, which means that you don’t need seven seats to be exceptionally popular. It’s no surprise that the Hilux would end up on our list. It’s the quintessential pickup for everyone around the world. A recent facelift only cemented its status as one of the most popular and inquired-for models in the country, and a wide selection of variants makes it all the more accessible for all. From the low-end G to the high-end Conquest, almost any budget for a brand new pickup can get you a Hilux if you’re willing to forego quite a bit of kit to meet your budget. Ford has gone on record stating that the Ranger is their best-selling model, and for good reason. It’s the most powerful in its class with its 2.0-liter BiTurbo engine, and it's decently comfortable for a pickup, something that cannot be said about most of its other rivals. The model is still a best-seller even after rumors of an all-new model to be launched soon. Perhaps a new model launch could propel the Ranger to the number one spot, however. One of our favorite recommendations and one heck of a truck is the Nissan Navara. An exterior facelift breathed new life into this pickup when it was updated back in 2021, and its updated interior might not have had the same treatment as the Terra, but it still continued to be one of the top sellers for Nissan last year. Fourth place is not bad at all in a stacked field of competitors, but the Navara stands strong and comfy in its spot even when faced with some rather “stiff” competition. It’s one of the more comfortable pickup trucks out there, and surely people would want that even in a pickup truck. Kia wowed us with the design of its Stonic when it was first launched, and it continues to win over buyer after buyer with its stellar looks paired with its enticing price tag. The Stonic is our most inquired-for crossover in the Philippines, and it continues to interest buyers who are looking for a nice and practical daily driver with a sense of style. For its price, you get an unprecedented amount of refinement, and a good level of comfort and convenience thanks to its features. It doesn’t bite back and has all the power that you need out of the 1.4-liter gasoline motor so it’s a pretty safe bet for beginner or experienced drivers who want a stylish and practical automobile. While Toyota and Mitsubishi fell out of favor in the 7-seater segment, the Suzuki Ertiga still remains strong in second place for 2021. Who said seven-seater fever was over? Not Suzuki, that’s for sure. The Ertiga is in a great spot having the value of a multi-purpose runabout at a price tag that can be had for well under a million Philippine Pesos. Minor updates were done since, but the Ertiga is still interesting buyers around the country. It goes to show that people always appreciate a killer deal. Finally, we’ve reached the number one spot on the list, and it’s the Isuzu D-MAX. What do you get when you pair interior refinement with industrial-grade robustness? For the D-MAX it gets the top spot in the most inquired-for vehicles list of 2021. You get the best of both worlds here, and it’s no secret that Mazda went with the D-MAX for its base for the new BT-50 so you’re in great hands when it comes to the D-MAX.