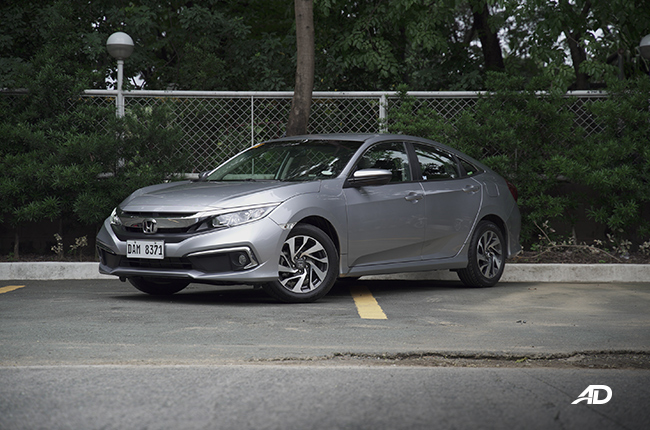 The Honda Civic 1.8S is priced at P1,115,000 and is slotted as the entry-level compact sedan from the Japanese brand, but is the base model vehicle still worth the Civic related price tag? Being the base model in the lineup, it means that it misses out on a lot of features that the rest of the variants benefit from.

For an extra P70,000, you could get yourself a 1.8E. This variant gives you more features despite the price increase thus giving you better value for money as the features it owns are almost the same as the RS variant. Here is a list of things you get and don't get in the base-model Civic. For starters, the Honda Civic 1.8S does not get the LED lights of the higher variants. It takes away from the premium feel of what the rest of the lineup brings to the table. It does, however, have LED daytime running lights which is a plus as it adds a touch of class to a base model. The halogen lights do a decent job of lighting the road, but it's still miles away from what the LED lights can offer. The 1.8S carries over the 16-inch wheels from the pre-facelifted variant. It's not immediately apparent that this is the facelifted model judging by the carry-over wheels and side profile. It has no repeaters on the side mirrors. These bulbs are instead located on the front bumper of the vehicle. There is also no exterior trunk release button. The absence of this feature may be a hassle for those who need to store items in the trunk of the vehicle as they will have to use the keyfob to open the trunk or go to the front to release the trunk latch. These minor quirks don’t do the sedan any favors, as it lessens the convenience factor of the entire vehicle. Steering wheel controls are present in the 1.8S, however, these are only for the volume and track seeking controls of the infotainment system. What is absent are the buttons for cruise control as this base model does not come equipped with it. Having cruise control could also help you get the most out of your fuel economy.

Related: Here are some ways to make your Honda even more fuel-efficient The gauge cluster of the 1.8S is semi-digital. Retaining the semi-digital gauge makes the refreshed 1.8S seem a bit behind the times. The rest of the Civic lineup gets the fully-digital gauges which brings them up to date while adding a touch of modernity to the dash. The real-time fuel economy gauge of higher variants is more engaging compared to the lackluster black and white display that the 1.8S offers. The interior of the vehicle features black fabric seats all around, it looks a bit basic. From a value for money standpoint, there are other vehicles out there that can give you better interior materials than the 1.8S. The top of the line Honda City gets better features while still being budget-friendly as it has leather upholstery from the get-go. The rear seats are also fixed which hinders the ability of the trunk to expand into the rear passenger area. The front seats also don't have backrest pockets. There is only one power outlet located on the passenger side of the dashboard which limits charging options. The head unit of the base model Civic is basic at best, only featuring Bluetooth as one of the only means available to connect your phone. The base model also shares the same unit with some of Honda’s other vehicles in its line up, such as the Jazz and City. The infotainment system does not have Apple CarPlay and Android Auto support. If the software was present it would make navigation and other phone app-related operations a breeze. The entry-level Civic also lacks key less entry and push to start, which takes away from convenience. The 1.8S also does not have power-folding side mirrors but it's mirrors are power adjustable. The entry-level Civic also lacks keyless entry and push to start, which takes away from convenience. Having keyless entry makes entering and exiting a vehicle much easier, the same goes with push to start as the keyfob does not need to leave your pocket. For safety, the 1.8S gets two airbags. These are for the driver and the front passenger. Other models in the Civic line have better safety as they come with a suite of airbags. Good thing, the 1.8S does have ISOFIX and traction control as standard.

The price tag of the 1.8S makes the vehicle difficult to justify buying. There are better options out there with better features. An example is the City VX+ NAVI which costs P1,068,000, which is only P47,000 less than the base model Civic. The VX+ variant already has the 1.8S Civic beat in terms of features as the subcompact already comes with Navigation, leather upholstery and cruise control as standard. Despite the Honda City having a CVT, it has paddles that are absent in the 1.8S. However, the ride comfort of the City isn't as good as that of the base Civic. The VX city also comes with keyless entry which is an absent feature on the base model Civic but present on the E variant Civic.

On the other hand, if you want better ride comfort and more trunk space, then the 1.8E could be for you. Just by adding another P70,000 you can get the middle child of the Civic lineup. For its price, it will give you better features and better value for money. Get Notified About Honda Civic News