Mitsubishi Motors Philippines Corp. (MMPC) closes out 2017 by updating the top-of-the-line Montero Sport GT midsize SUV. It now comes with advanced safety features that will make journeys much safer for its owners and other road users — without changing its price tag.

Aside from those, it also comes with Forward Collision Mitigation (FCM) automatic emergency braking system and Blind Spot Warning (BSW), which lessen, if not completely eliminate, unintended collision with other road users. As the icing to the cake, Ultrasonic Misacceleration Mitigation System (UMS) is added to the 2017 Montero Sport GT. This high-tech feature controls the motor output of the SUV when parking on tight spaces. With that, it prevents sudden burst of power output due to accelerator misapplication. Audio and visual warnings will also be triggered if the front and rear sensors detect nearby obstacles.

Another update to the 2017 Montero Sport GT is the Adaptive Cruise Control (ACC). In contrast with the normal cruise control, ACC uses radar to maintain the distance of the SUV to the car in front, matching its speed when needed without having to step on the accelerator or brake pedals.

Basically, you can drive through the entire North Luzon Expressway (NLEX) with both of your feet resting on the floor. Pretty cool. 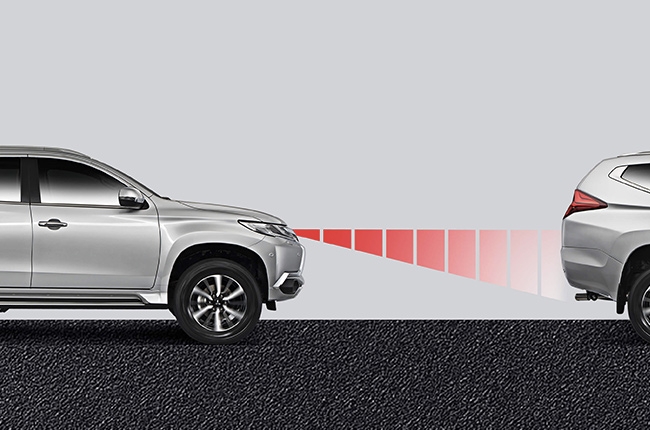 As mentioned, there are no exterior updates with the 2017 Montero Sport GT. However, the cabin has been refined with piano black finish and plush black leather upholstery.

At the heart of the MMPC’s midsize SUV is still the 2.4L 4N15 CRDi diesel engine with Mitsubishi Innovative Valve timing Electronic Control (MIVEC) system. It can produce 181 hp and 430 Nm of torque, which is then transmitted to all 4 wheels via an 8-speed automatic gearbox.

The 2017 Montero Sport GT has the same sticker price of P2,058,000 and now available in all MMPC dealerships nationwide.