The 2020 Toyota Corolla Altis is finally here and in the metal. Speculative reports were released about the vehicle and what its possible specifications could be, but we finally got our hands on the official specifications. There are two engines that will be powering this new generation of Corolla Altis here in the Philippines. The first engine option is the carryover 1.6-liter 1ZR-FE which makes 121 hp. We initially speculated that it would be the 1ZR-FAE variant but Toyota Motor Philippines (TMP) chose to carry over the existing engine instead. The engine made its first appearance on the 10th generation of Altis during its mid-model facelift. From then on, it was used in the 11th generation and now has a new life in the base model E, G, and V variants of the 12th generation.

The next powerplant option is the 1.8-liter 2ZR-FXE. Together with the electric motors, the two combined can produce about the same as the 1ZR at 121 hp. The gasoline engine on its own makes 97 hp and 142 Nm of torque. Both engines can be had with either a 6-speed manual (E and G variants only) or CVT. 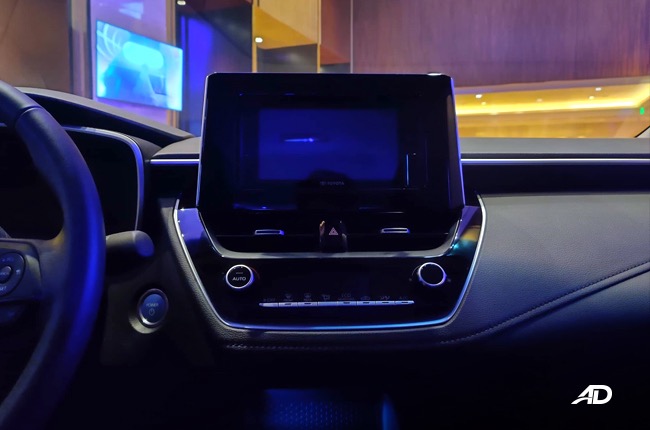 The all-new 2020 Corolla Altis also rides on a new platform. It utilizes the Toyota New Global Architecture (TNGA). The vehicle features MacPherson struts upfront while the rear gets a double-wishbone suspension. The new suspension set up is a far cry from the torsion beam suspension of the previous model, which should provide the vehicle with better handling dynamics and better ride comfort.

The new Corolla Altis is available in six variants starting with the 1.6 E as the base model. The E variant is the only variant that is priced below one million pesos. Since it is the base model unit, it only comes with a 6-speed manual and will understandably lose out on certain features. The vehicle only carries halogen headlights, no fog lights, has fixed intermittent wipes, fixed rear seats, and a non-touch screen infotainment system. What it lacks in features, it makes up for in safety. Even if it is the base model it comes with seven SRS airbags, ABS with EBD and stability control. It's more value for money than what the previous generation offered. Like its previous generation, the 1.6 E now rides on 205/55/R16 aluminum alloy wheels.

Heading one tier up is the 1.6 G. This variant comes with more equipment which also justifies the bump in price. The vehicle features power-folding side mirrors, a 60/40 rear seat for those who would want to get more trunk space, it also features a 4.2 inch colored multi-info display, a leather steering wheel with audio controls. Soft-touch panels are found on the door trim, as well as rear armrests and automatic climate control. For the top-of-the-line variant, TMP drops the 2.0L option for the 1.8 V Hybrid powertrain. It doesn’t differ too much from the 1.6V but it does benefit from Toyota’s Safety Sense, which includes a pre-collision system, adaptive cruise control, lane-keep assist, lane departure warning, and automatic high beam. It also benefits from the new Hybrid drivetrain. While, it doesn't have a horsepower advantage over the naturally-aspirated 1.6L engine, it does have an electric mode to help you get the most of your fuel and aid in torque delivery.

The pricing of the all-new Toyota Corolla Altis is as follows: