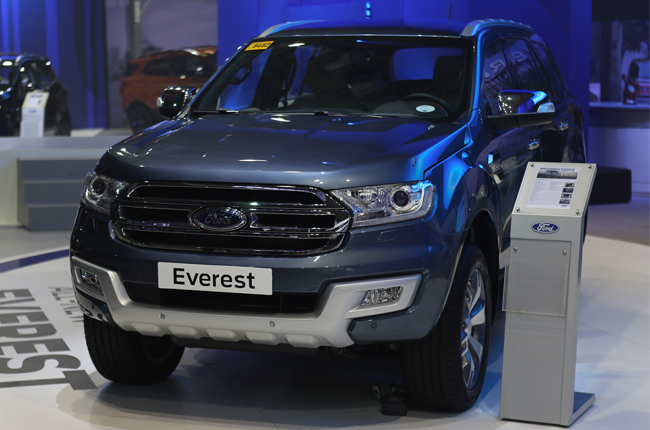 Ford Philippines announced its best-ever March performance after retail sales rose 46% year-over-year to 2,746 units last month. The impressive feat was achieved due to the strong demand for the all-new Everest, EcoSport, Ranger, and Explorer.

The American brand also recorded a 49% increase in overall sales from the previous year to 7,876 units.

Ford’s best-selling nameplate the all-new Everest took a huge chunk of the overall sales with 1,151 units this month and 3,530 units in Q1. This SUV is loaded with tech such as the SYNC 2 and other active safety features that help the driver and passengers get to their destination entertained and without worries.

At this year’s Manila International Auto Show (MIAS), the all-new Everest Titanium 2.2L 4x2 recently received several features on its top-of-the-line variant. This Premium Package, which was once exclusive to the 4x4 version, is for consumers who don’t need off-road capabilities but want all the added goodies and safety features.

On the other hand, the subcompact crossover EcoSport continued to be the front-runner in the segment with 669 units sold in March and 1,830 units in Q1. Its best selling point is that it offers the affordability of a sedan with the practicality of an SUV.

Ford Philippines also launched its new variant the EcoSport Black Edition during MIAS. This new variant of the crossover is based on the top-of-the-line EcoSport 1.5L Titanium, but now boasts black trims on the 16-inch alloy wheels, headlamp housings, grille, fog lamp bezel, side mirrors. It also gets add-on accessories such as a roof cross bars and a rear spoiler.

Our record first-quarter reflects the strong appeal of the Ford brand among Filipinos, and our continuing efforts to provide the best customer and ownership experience,” said Managing Director of Ford Philippines, Lance Mosley.

Meanwhile, the innovative Ranger still has the attention of the consumers and sold 694 units and gave it a total Q1 figure of 1,771 units. This pickup is the 1st in its segment to come with the active safety features such as Lane Keeping Alert and Lane Departure Warning with Lane Keeping Aid, Adaptive Cruise Control with Collision Warning and Forward Alert, and front/rear Parking Assist, redefining the segment.

The premium Explorer SUV contributed 99 units in the last month of Q1, giving it a total of 312 units sold. The Fiesta sold just 67 units in the said month bringing its total to 217 units for the quarter.