It’s that time of the year again, where automotive enthusiasts gather in full force to witness the Manila International Auto Show (MIAS), an annual event flooded with fresh cars of different brands and lifestyles. Aside from the burning controversy on which car models are to be launched during the said event, Ford Philippines, on the other hand, is offering enticing deals when you purchase a brand new vehicle at the Manila International Auto Show. Up to Php 3-million worth of prizes and cash discounts await customers.

Customers who are to reserve or purchase an EcoSport, Everest, Mustang, Explorer, Fiesta, Expedition as well as the Ranger in any variant of your their choice are entitled to pick a prize ranging from premium Ford merchandise, Rudy Project Eyewear, a 3-year Scheduled Service Plan (SSP), and cash discounts which start from P10,000 up to P100,000. Notably, over 100 Ford customers have the chance to take home one of these prizes.

Also, for those who are to purchase any of the Ford models mentioned above during the Manila International Auto Show or within the entire month of April, you’ll be eligible for some raffle coupons wherein one winner shall take home a cash prize of P1,000,000. 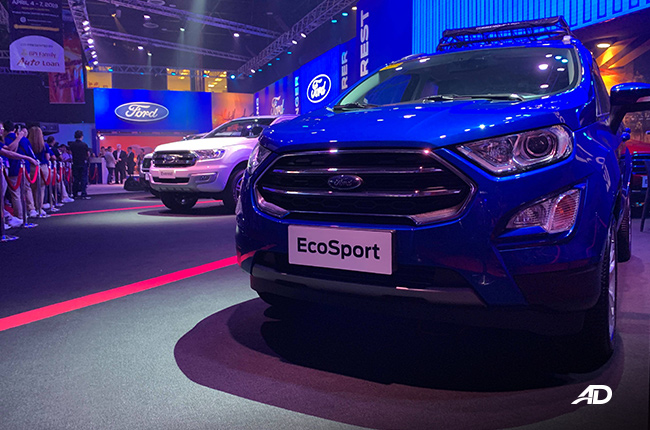 Visitors are welcomed with a fleet of Ford vehicles, from the capable urban warrior EcoSport, which mainly highlights its Titanium 1.0L Ecoboost and the recently added 1.5-liter Titanium variant, to the macho Ranger Raptor and Wildtrak. Other vehicle displays include the Everest, new Explorer, and the new Mustang.

Aside from those special deals, Ford also offers other deals ranging from downpayments and discounts including the Ford Ranger 2.0-liter Bi-Turbo Wildtrak 4x4 AT which is available with a retail discount of P60,000.

For other deals and enticing offers, do visit any Ford’s local website or any of its dealership nationwide or drop by the Ford booth at the Manila International Auto Show happening at the World Trade Center until April 7.