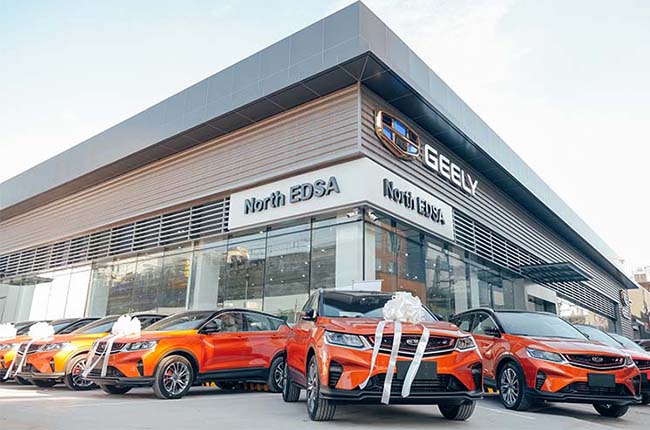 Geely Auto has been making waves in the global market. It has claimed the title of the best Chinese brand in the world for the third time in a row for 2019. The Geely brand alone without the help of other car companies under its belt was able to sell over 1.3 million units globally in 2019. Continuing with its momentum the brand aims to surpass last year’s sales figures and push for 1.4 million units for 2020.

Related: Geely Auto remains as the best Chinese car brand in the world for 2019

Even in the Philippine market, Geely is making a splash. The brand launched in the latter half of 2019 and has been experiencing steady growth. Its popular crossover, the Coolray has seen a rise in popularity thanks to its attractive price point and for features that are found above its class. The Coolray even has its own Facebook group dedicated to the model.

In addition to its pioneering North EDSA showroom and service center, the Chinese automotive brand will add five more to the Metro Manila area. These will be in Quezon Avenue, Manila, Shaw boulevard, Greenhills, and Marikina. Another five will be added to the island of Luzon, particularly in Bacoor, Cavite; Imus, Cavite; Batangas; San Fernando, La Union; and Angeles, Pampanga.

Geely’s expansion doesn’t just stop with Luzon. The brand also seeks to expand into the Visayas and Mindanao regions. It will add two dealerships in the Visayas, one in Iloilo and the other in Cebu. In Mindanao, the Chinese automotive brand will add four dealerships, which will be located in Davao, General Santos, Cagayan De Oro, and Tagum.

In 2021, Geely Philippines will add 15 more dealerships into its portfolio; four of which will be in Metro Manila: Makati, Alabang, Libis (Quezon City), and Pasay. The other 11 dealerships will be scattered all over the country in the following areas: Angeles, Pampanga; Marilao, Bulacan; Bacolod, Negros Occidental; Bataan; Pangasinan; Lipa City, Batangas; Cebu; Cabanatuan City, Nueva Ecija; Tacloban; Legaspi, Albay; and Zamboanga.